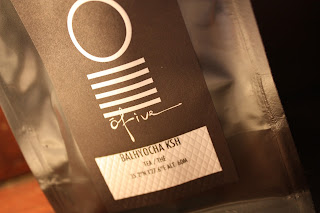 The concept of aging Korean tea is a new one, even 8 years ago, you would be hard pressed to find a Korean tea shop owner or drinker that had even tasted aged Korean tea. Back then a few tea masters that one respected both said that ddokcha can and should be aged. Conversely they also claimed to have never tried a balhyocha (Korean yellow tea) that had improved tremendously with age. They had claimed that often people store balhyocha in oongi wear and some claim that balhyocha stored and aged in this way does, in fact, improve with age. Years ago one had stock piled many boxes of Jukro Uricha to age but, after aging experiments with 2 years old and 3 years old boxes. One had come to the same conclusion as those wise teamasters, it tastes much better consumed fresh within the first year or two. The high price of Jukro balhyocha (uricha) simply made it not worth the risk of storing and the boxes were easily consumed.


Enter Pedro of O5Tea. In 2009, Pedro acquired a large amount of Kim Jong Yeol's (Butea) balhyocha and sold it under the now defunct Dao Tea label. In many great conversations and tea meetings with Pedro that followed he decided not to order the 2010 balhyocha and instead sell off the leftover from 2009. If you ordered any balhyocha from Pedro in 2010 you, in fact, received balhyocha from the 2009 harvest year. This was done as the teamasters he consulted with recommended that balhyocha was certainly just as good if not better when left to age for a year. Many producers don't even release their balhyocha until a few years pass (see the comments in these posts on Jukro Balhyocha and Ssangkye Chun-Go-Hyang).


It just happens that Pedro had recently found a bunch of leftover 2009 Kim Jong Yeol (Butea) balhyocha. Walking though the door of this O5Tea shop in Vancouver a few months ago the air was filled with the scent of slow roasted balhyocha. That same balhyocha first sampled at the Victoria Tea Festival three years ago was in a frying pan on top a conduction heater set to very low heat and had been roasting for a hour or so. One picked up a bag of that tea and had let it mellow over the last few months. With the pot of water boiling... let us prepare some of this tea... 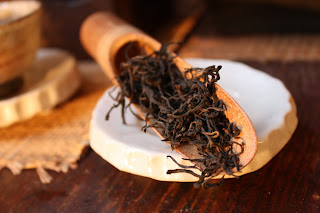 The leaves smell of distinct piercing dark chocolate they have a slight edge of buttery odours and faint woods under the distinctly chocolate smell. 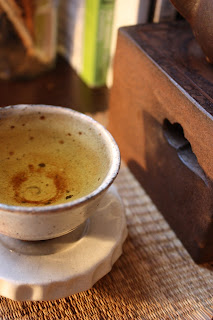 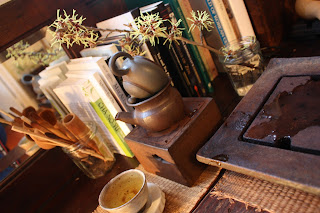 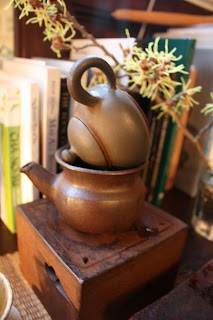 The first infusion delivers a muted, very light, peach taste with slight creamy-soapy finish. There is even a slight spicy cinnamon edge to the taste. The mouthfeel is watery, very very light. Hotter water is needed to push this tea harder than a fresh balhyocha. 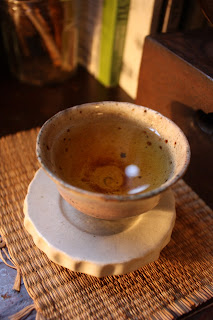 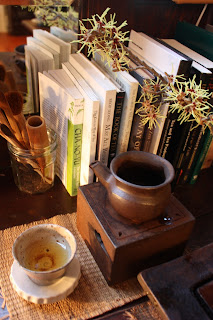 The second infusion is prepared with much hotter water and delivers a mellow, very soft fruity banana peach taste with almost unnoticeable suggestions of chocolate. The tea has a thin mouthfeel with saliva pooling somewhat in the back of the throat. The taste profile is simple, soft, and light. The qi is very relaxing-tranquil in the body. It is noticed especially in the head, softening it. 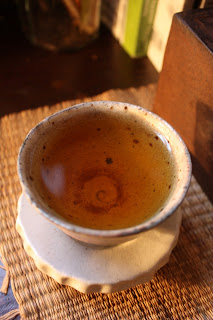 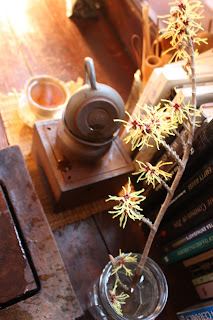 The fourth infusion is a watery, flat-juicy-dry faint fruit taste. The mouthfeel is thin but coats the entire mouth, even the mid throat where the feeling is slightly dry. A gummy-raisin very faint aftertaste is found a few minutes after swallow. 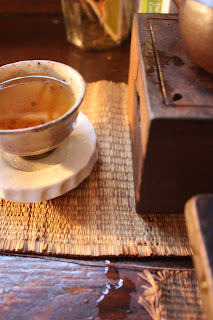 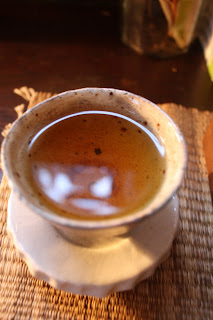 Infusion number five is much the same simple profile as above now a bit more dry and woody. It slightly scratches the throat now. This tea delivers a very mellow qi. There is an almost licorice-wood finish minutes later on the breath.

The next handful of infusions deliver soft, fruity monotone wood and indistinct peachy-fruity taste. The thin all-coating mouthfeel becomes more dry. There is a lingering peachy aftertaste in the mouth minutes later. With each infusion, more flavour is lost until it becomes barely flavoured water.

It is put to an overnight infusion which gives off a tangy, flat wood taste. 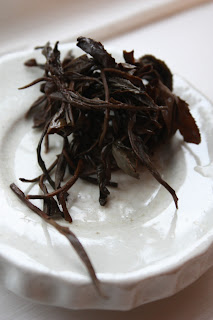 Compare the above notes to the notes of the fresh 2009 balhyocha or to other tea bloggers notes on this fresh tea.

lovely tasting notes,
The oldest balhyocha I've had was 3 years old however I have found that balhyocha tastes best when it is very, very fresh. I was in korea for most of the tea harvest last summer; and balhyocha that is between a week and two weeks old, and has been well stored in ongi, has a distinctly smokey taste which is delightful. I hope to get my hands on some more aged samples in the future!

Hahaha... Each has their preference. Most all Korean tea masters generally agree with you!

The fresh, within a few days of being made, balhyocha has a taste about it that is not resolved for a few weeks/months. It is both fresh, an edge of green-tea-like feeling, as well as oxidized. Any teas that are just produced, not exclusive to balhyocha, have these issues.

It really depends on the balhyocha and the way it is produced. Some of the most enjoyable balhyocha that one has tried was stored by the producer for 3 years before release.

Thanks for sharing your experience with aging and balhyocha. Much appreciated.