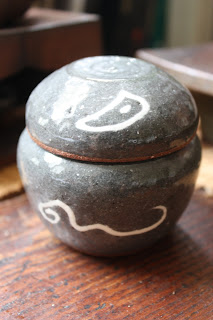 If you were at all intrigued by the sampling of the 2009 Kim Jong Yeol (Butea) aged and re-roasted balhyocha from Pedro at O5tea, you may also find this post interesting. Once again it offers an interesting perspective on aging balhyocha. What is interesting about this tea is that it was picked from the same area, produced with the same methods, and by the same people that produced the 2011 and 2012 "ZeDa" brand balhyocha that is sold by Sam of Good Green Tea.

"Sam acquired it from a small farm from Sancheong, Jiri Mountain, and that is was completely wild tea. He claimed that Mr. Hong has over 50 years experience making tea and that he makes it all by hand with only the help of his wife. Mr. Hong makes only Hwang cha (balhyocha) with his tea leaves and only produces 15 Kg per year (he keeps 5 KG of this tea). The production of this tea is all natural and even includes air drying the leaves on big heated boulders during night time instead of the standard ondol heated floors which are commonly used to produce balhyocha."

Although one did try many 2006 balhyocha back in 2006, this is the oldest aged sample of balhyocha one has yet to try. 2006 was an excellent year for Korean tea and produced a great harvest. With that said, this should be an epic tasting... 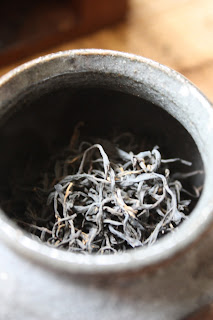 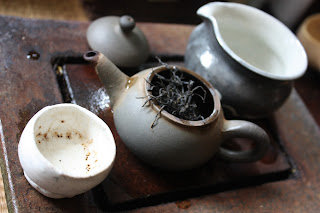 The dry leaf looks much the same as the 2011/2012 but smells of old musky smells. It carries a deep aged odour of sweet black cherry in the distance mixed with a very slight deep forest note. These leaves are stuffed in to a warmed pot. 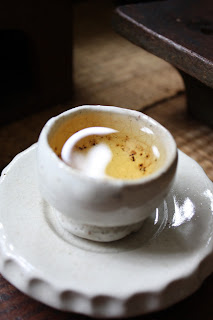 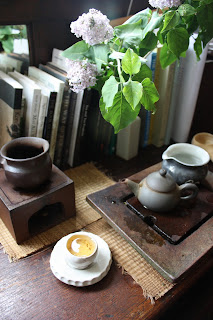 The first infusion is prepared with hotter water than what one would normally use for a balhyocha, a short rest in the cooling bowl. This first pot is light, juicy, watered-down fruity-pear taste. This initial taste disappears among the faintest date-woody-raisin tastes before disappearing on the breath. The mouthfeel is flat and watery- it supplies a light coating to the mid-deep throat. Clearly hotter water is still required. 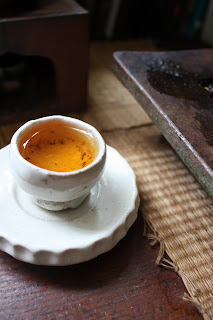 The second pot is filled with water that is quickly transferred from the cooling bowl. The taste opens with creamy, spicy, thick, malted-apricot notes with hints of bitter coco and tobacco underneath It is these tastes of coco and tobacco which are last to disappear on the breath. Seconds later a thin woody-forest note skirts underneath The mouthfeel is thin and taught, expansive in the mid- and upper- throat.

Third pot comes with more pronounced woody-forest tastes which were just underling in the last infusion. They now mix evenly with the spicy-malted-apricot notes. There is a depth to all these tastes. The creaminess and thickness of last infusion is less here. There slightly more coarseness and dryness mixed in now. The throat feel is substantial now especially in the deep-mid throat. The sensation is that of a cool opening feeling there. The qi of this tea is very soft, ones face softens and a subtle warm tingling sensation is felt throughout the body. Minutes later a woody taste is left in the mouth. 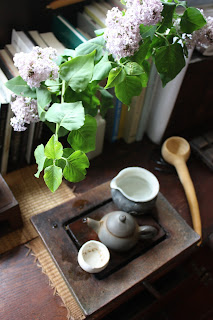 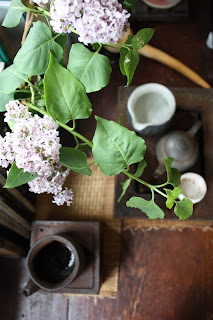 The fourth and fifth infusions are much the same as the third. The tea is just starting to become more watery now. There is a light, slightly malty-juicy-wood monotone flavour now dominating the profile. A lingering sweet malty-apricot taste lingers minutes later. Qi is strong now on the mind but almost unnoticeable on the body. The qi accumulates lightly in the chest making it feel light. 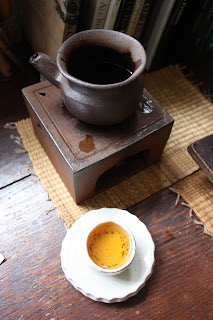 The sixth, seventh, and eighth infusions are becoming more simple. It is a barely spicy, malty wood taste with a deep woody edge. As the infusions become more watery now they develop and thin-watery, sweet, malty, vague fruitiness, with raisin tones. Some tangy wood notes linger in the breath minutes later. The taste has a simple purity to it. 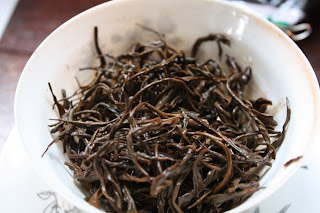 These leaves are put to some overnight infusions which pull out a malty-sweet, juicy-apricot fruit taste with a thin barely noticeable woody bottom. The thin coating of fruit is long in the mouth. The second overnight infusion is a watered down version of these tastes.

Thank you Sam for this interesting opportunity.  Sam is now taking orders for the 2013 ZeDa Balhyocha from Mr. Hong, in seven years you never know...

Matt Cha, your blogs are amazing. I would love to have your permission to use your matcha photos if possible. What is your e-mail address? I could contact you that way if it works better for you. I also live in Victoria.

Thanks for your interest. As long as you give a photo credit and are not profiting from the use you can go a head and use the photos.