Containing the Qi: The Living Mool Hang A Ree 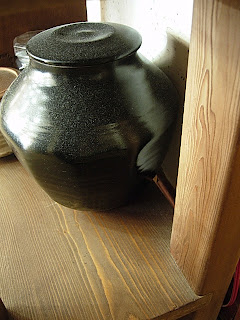 'Mool Hang A Ree' is Korean for 'water storage container'. 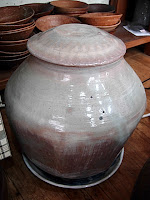 Water patiently rests in them before being boiled to make tea. Like a mother nurturing a child, so too does a Mool Hang A Ree nurture water. If the water is hard and stubborn the earthen clay that makes up a Mool Hang A Ree is said to soften and soothe the water cradled within. The water is at home cuddling close to the Mool Hang A Ree, absorbing its minerals and natural deposits. The water sprung forth from the earth, was removed, now it returns. How soothing is it for a child to be reunited into its mother's arms? 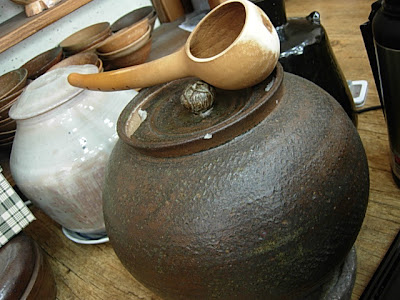 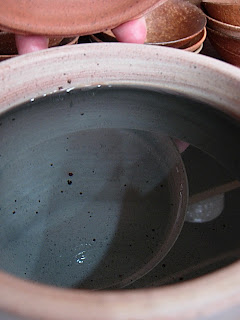 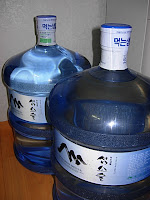 HEY... How'd that picture get in there!!! The works pictured are by Korean potter Kim Jeong Pill (excluding the last one of course).

This tea, like many teas from Korea, was produced all by hand using only traditional methods. The maker of this tea told me that he carefully selected his team of tea-makin grannies and instructed them to put their hearts and souls into making this tea. The following is the end product of their care and love of tea... 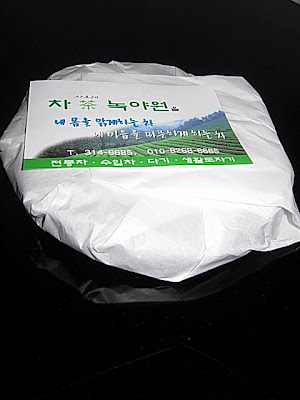 The dry leaves are a hodge podge of browish greens, light and dark browns mixed in a loosely packed cake with light brown stems. The smell of this tea is indubitably one of its high points as it emits the strong odour of fine sweet tobacco that is unfortunately lost in its infusion. 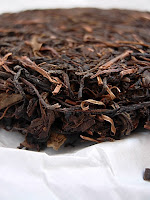 Instantly, sour and an uninviting bitterness rush to conqueror the buds of one's tongue. This is almost enough to spit the tea across the room. But before one can act on impulse this tea transitions into an excitingly pleasurable bitter that stagnates on the roof of ones mouth and front of ones tongue for quite a time after. The flavors of sweet hay, raw sugarcane, and butter fight for attention over astringency. After about the fourth or fifth infusion, the intensity starts to wane as the major flavour elements have noticeably dropped off and slowly give way to soft astringency and sweet yellow water. 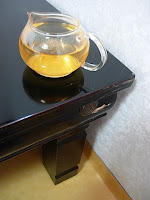 The qi of this tea is very simple which shows telltale signs of its youth. It can mainly be felt in ones mouth and slightly stimulating the area below ones tangen. 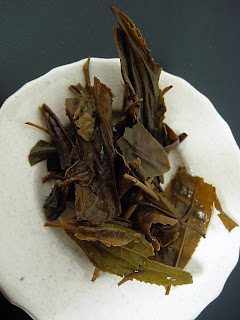 What the Fuck is Ddok Cha?!? 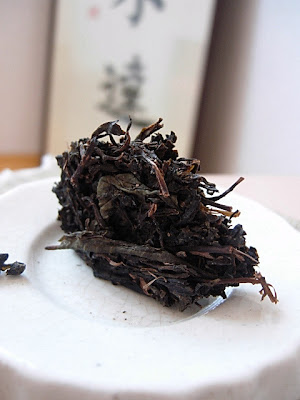 Bet you've never heard of Ddok Cha! Even googling this mysterious tea leads to no relevant results. It seems odd as this tea has such a long history in Korea but is virtually unknown to even the common folk here.
This tea was first used here about 1400 years ago, about the time some people believe tea became popular in Korea. It was particularly fad among monks who frequented the mountains during the Goryeo (918-1392) rule of the peninsula when Buddhism was at its height in Korea. When the Joseon (1392-1897) ousted the Goryeo they began a campaign of repressing everything associated with Buddhism. They ruled by using the principles of Confucianism and claimed that Buddhism was just 'Ooga-Booga'. Because ddok cha was connected to the Buddhist way of life it was ostracized by the ruling class and literi who much preferred the simple green loose leaf variety. If it weren't for the dedicated, zenned-out, tea drinkin' Korean monks we probably would know nothing about this wonderful, nearly forgotten tea.
So, what exactly is Ddok cha already!!! Well 'Ddok' in Korean means pounded congealed rice cake and cha (clearly and most obviously) means tea. This tea isn't made from rice cakes, in fact, it's 100 % pure Camellia sinensis. The word 'Ddok' is used to describe this tea because it has a similar method of production to the famed rice cake. Rice cakes, just like the tea, are produced by placing rice (or tea) on a large stone and beating it repeatedly with a heavy, oversized wooden hammer that, in many ways, reminds me of the kind used to play Wack-A-Mole at the ol' town fair.
The tea leaves used for ddok cha are the small type of Camellia sinensis that are used in the teas of Northern China, Korea and Japan today. These leaves are small and thin and can grow to the full size of 10 cm or less. They are almost exclusively used to make green teas and typically aren't good for oxidizing due to these leaf characteristics. Nevertheless, ddok cha is produced in ways which use and accommodate these specific leaf characteristics to maximize the full-bodied flavour of this tea.
The production process is the exact same as green tea production in Korea and only differs from it in the last few steps of production. Unlike green tea, Ddok cha goes through a process of light oxidization that is initiated when the leaves are given the beats with the giant wood mallet. They are pounded together in a manner that is considerably less dense than the process used to make puerh. In doing so it allows the tea to oxidize in a much different way, where a larger surface area of the oxidizing tea is exposed to air. The tea is left in the shade to oxidize and chill out for only four days or so.
The result is a smaller loosely packed cake that is just a tad oxidized. This tea will give off a liquor that is a bright but hazy yellow colour. It's flavour will continue to mature as the leaves age and will reach full maturity 3 to 5 years after production. Did I mention that it just tastes damn good???
Posted by Matt at 5:35 PM 9 comments:

The Qi to Good Tea

If ones wishes to drink tea that dances throughout ones body, touching one deeply, one must be mindful of the qi. One must be mindful in preparation. Only the best fresh mountain water should be selected if possible. The water in the mountains is fresh, exuberant, and calm, like a new born baby discoving the world moments after arriving. The freshness of water is important if these characteristics wish to be retained. If water is left sitting for too long it's qi becomes stagnant.

Water should be boiled quickly. This ensures that its energy is alerted. If it is boiled too long its qi can be slightly exhausted or released back to the world as steam screaming out of the kettle spout. Qi is best maintained when the kettle is always topped up with fresh water instead of continuously reheating the remaining water.

One must also be mindful during consumption if they hope to enjoy the full qualities and benefits of tea. When one infuses tea with hot water a chemical reaction takes place. This important fact is often overlooked by tea drinkers. The reaction releases enzymes stored in the leaf as the qi of the water playfully but passionately interacts with the qi of the leaf and creates something that is more than just the sum of its parts.

The resulting liquor now has its own energy, its own qi. If it is to be captured in its full splendor it must be consumed immediately as energy from the resulting infusion quickly disperses. The longer the liquor sits at room temperature before it is consumed the more the qi and other helpful elements such as the antioxadant catechins dissipate. Studies by Mi-Kyung Lee and Young-Seo Park from Mokpo National University in Korea (Changes in Flavonols Content and Sensory Qualities in Green Tea Extracts as Influenced by Infusion Temperatures and Its Time & Taste Changes in Taste Quality and Catechin Content in Tea Extracts According to Elapsed Time and Ambiant Temperature ) have demonstrated that as tea sits at room temperature the good bitterness, astringency, and sweetness in the flavor of tea decreases along with its catechin content. They recommend that tea be consumed immediately after its infusion.

Don't hesitate, drink up, and enjoy.

Peace
Posted by Matt at 3:49 PM No comments:

There is only one thing, from the very beginning, infinitely bright and mysterious by nature.

It was never born, and it never dies. It cannot be described or given a name.