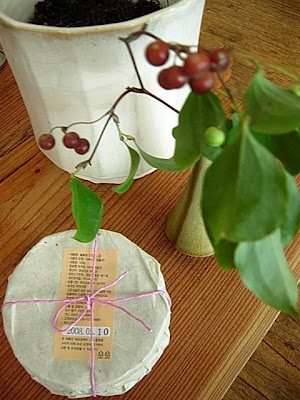 This traditional Korean style tea has a long history that goes back to the 7th century during the rule of the Shilla Dynasty in Korea. 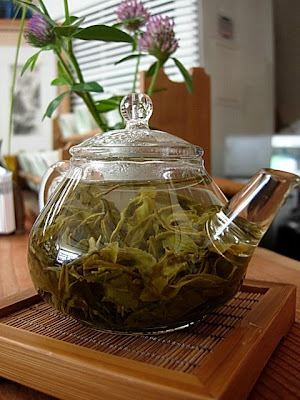 This tea was produced in eight steps. The first step involves the hand picking of this tea, in the clean and serene Jiri Mountain valley at a wild tea plantation just outside Hadong on the 10th of May, 2008. Secondly, the tea is dried in a large, gas-fired aluminum cauldron for 20 minutes. This acts to partially stop its oxidization. Next, the tea is removed from the cauldron and is placed on a rough, fibrous rush mat where it is violently rolled by hand. At this step the leaves break a little giving way to a reaction between tea and air. Then the tea is shade dried where it is exposed to the open air of the mountain valley for 48 hours. Next, the tea is separated and weighed into 100 gram piles. Then the leaves are steamed to soften them. When the leaves are supple they are pressed into cakes. Finally, they are left to dry in a warm room for 3-5 days.
If this tea tastes anything like last years, it will undoubtedly be an interesting session. The proprietor and producer of this tea, Mr. Kim, suggests traditional Korean style gong fu brewing, 2 grams of tea for intervals of 30-40 seconds or 3 grams of tea for 10-20 seconds. He claims that this tea will acquire its best taste in 3-5 years.
The tasting notes are as follows... 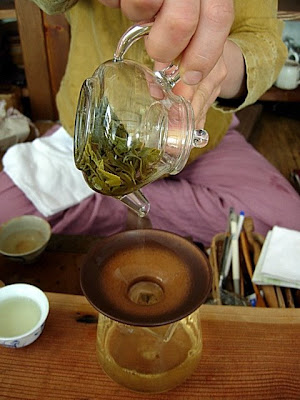 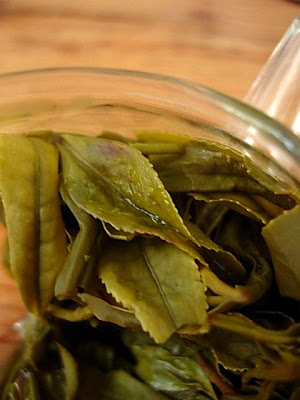 What? No notes? Why?
Well, due to peaking interest (see this link to Toki's adventures in Korea) one has decided to offer thanks to some of the other blogers out there whose blogs one regularly takes great pleasure in reading and learning from. 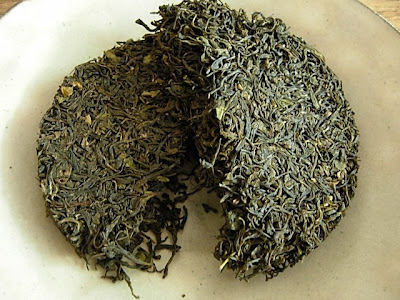 Three 100g cakes were broken in to threes (that's nine 33 g samples), packaged in the traditional Korean way in rice paper, and then mailed away.
One apologizes in advance to those who were missed, they will be first on the list next time one sends goodies out.
One looks forward to reading the notes on your blogs of this rare Korean tea.
Peace
Link to Marshal'Ns tasting notes
Link to Alex's (Another Tea Blog) tasting notes
Link to Bret's (Tea Near) tasting notes
Link to Stephane's (Tea Masters) tasting notes
Posted by Matt at 6:10 PM

So this is what you're sending out. It looks very interesting, I can't wait to try it! Thanks Matt. :)

I like the fixed teapot. Do you know anybody who knows how to do it?

just got the tea today. thanks, Matt!

The recommendation is 2g or 3g of tea for what volume tea vessel? Do you have the korean characters for Ddok Tea?

The tasting notes are already in the article! This tea is true to its nature, to its original environment. It tastes 'clean and serene', like the Jiri Mountain Valley.

Thanks for the walk in the calm spring sun! I thouroughly enjoyed it. And I was quite amazed at how many brews I got with so few leaves.
This tea is peaceful. No wonder you like it so much (given your 'Peace' signature). This makes this tea, coming from you, even more special, like having you in spirit in my cup!
Merci mille fois!

A smaller pot will do just fine for steeping 떡 차. Experiment as your heart tells you.

One is happy you enjoyed the tea. Thanks for the warm review.

I am intrigued by this tea. Would you be willing to consider a tea exchange of sorts? I can be reached at tiequanyin at gmail

Have a good one,

Hi, Matt. I'm one of Stéphane's customers and found your blog as the result of having received some ddeok cha and al-ga cha as a gift today from Korean colleagues who know of my interest in tea. I'm assuming that al-ga cha is the Korean equivalent of cooked puerh. The directions from the vendor suggests briefly roasting the teas prior to brewing. Any thoughts on this? Since these teas are both young (2008), I'm inclined to just let them age without sampling them yet.
BTW, love the little glass teapot. Are they common in Korea?

These little glass teapots are all too common all over Asia. They are especially good for showing the leaf of teas or for watching flowering teas unfurrow. However, they don't possess the ability to round out or add to a tea like pottery does.

As far as the teas, you have acquired from Korea, the ddok cha can be consumed immediately and one recommends trying at least a little bit so that you can appreciate its growth as the flavour changes with age. Aging ddok cha is done the same way one would age puerh.

Your ddok cha from joytea (www.joytea.com) is the most common in Korea. It is of the traditional variety just as you mentioned. One will inevitably review this ddok cha at some point here on this blog.

All Korean teas are 'roasted' to some degree. This tea you have there is probably a semi oxidized or yellow tea. Korea's answer to black tea.