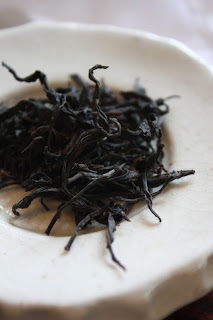 This balhyocha is from an experimental batch of tea made from Daejak or summer leaves. It should not be confused with the two other Kim Jong Yeol balhyocha, the saejak grade "saebyeok" (sunrise) and the jungjak grade "noeul" (sunset). This tea is 1 of 2 summer teas that Pedro recently gifted, the other being the 2011 Hankook Daejak grade Oolong.

On this cool rainy spring day a hardier tea such as this seems perfect. Wonder how it compares with the experimental oolong Kim Jong Yeol also produced from Daejak grade summer leaves? Let's find out as one's mind quiets down with this tea...

The large dry leaves emit subtle fruity-pumpkin notes with an even more faint forest-pungent odour.  They are placed in the warmed pot. 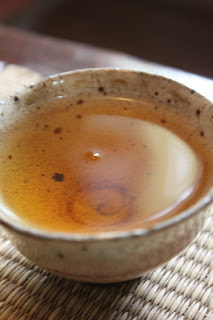 The first infusion presents watery, bright, distinctly creamy chocolate notes with long coco tastes that stretch over the taste profile. It is very uncomplicated but distinct and quite tasty. The mouthfeel is mild. The second infusion is much the same not changing in any noticeable way. 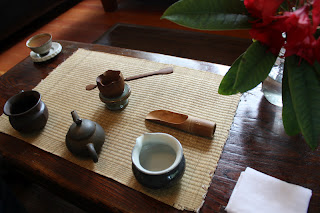 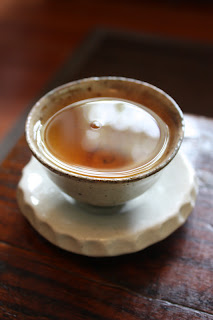 The third and fourth infusions see the simple but flavourful tea become just a bit more creamy and maybe lose just edges of its chocolate taste. A slight coolness in the mouth is noted. The qi of this tea is mild but softly warms the stomach and lightly strokes the mind. The taste of this tea is stable across many infusions and changes very little holding its stamina late into the session. 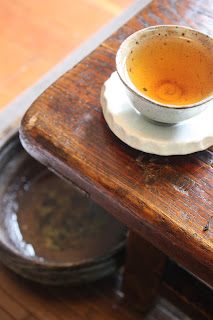 The sixth, seventh, and eighth infusions see much of the same with slight woody notes arriving with distinct chocolate under longer infusions using higher water temperatures. The ninth infusion sees some suggestions of fruit. 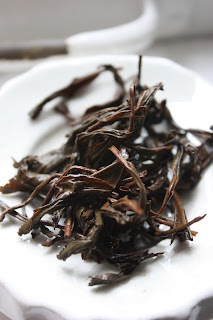 This tea is put into overnight infusions not because lack of stamina but simply in an attempt to push out some of those slight fruity notes that fail to arrive throughout the session.