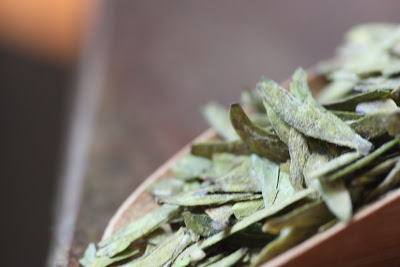 It was produced using the same production technique used for long jing by the hands of Mr. Weng Xingzou. He has small property near scenic Qian Dao Hu, Chun'an County, Zhejiang Province. His property is 893m above sea level and on it are semi-wild bushes of tea. This tea comes from the first day of the 2010 harvest season, picked on April 18th and 19th, a day after the last snowfall of the year covered the nearby peeks on April 17th.

The inside of the big zip-locked bag is coated in white hairs and fuzz that have came off the hair covered leaves. Most still remain on the small flattened buds. These small buds smell of light, sweet, mellow notes. When they enter the warmed teapot they emit a soft roasted smell.

Cool water and shortish infusion coax out pine nut and cream corn flavours. These tastes seem to come in separate waves not as a mix. The taste is frosty and creamy- light. The mouthfeel is mossy and very full right from the first sip. This tea is yummy. 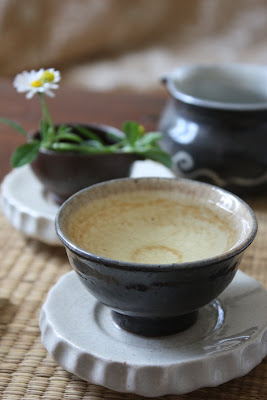 The second infusion is prepared and consumed. It pours out of the pot a very light, transparent, white-green-yellow. The second infusion shares the flavour profile of the first but its mouthfeel is more involved. It is thick and mossy but turns slippery with time. There is a orchid aftertaste that takes time to ascend in the aftertaste. One savours this aftertaste as it trails off a bit.

In the third infusion a very slight bitterness is barely detected within the wonderful mouthfeel that has begun reaching toward the throat. This creamy soft tea has qi that is ultra relaxing and by the third infusion one feels almost drowsy under its effect. 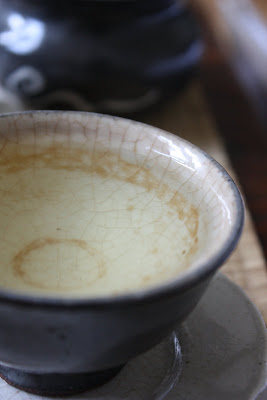 The fourth is creamy, slightly sweet, and a touch more bitter.

In the fifth infusion a slight floral quality emerges once again. The chaqi now sharpens ones mind- a movement from relaxation to gentle concentration.
In the following infusions creamy corn notes are still apparent but become progressively watered down. Floral notes fade into sweet water. 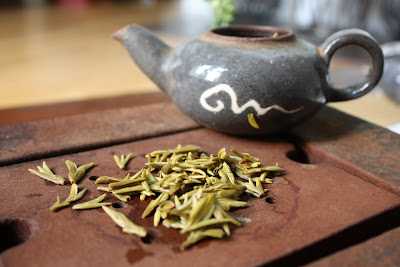 Pedro from Dao Tea informs one that tea from this same property picked in the weeks that followed will be on sale at Dao Tea within the next few weeks.

Thanks for the generous gift.

Long Jing is a tea we have all been maybe over exposed to. We have read about it many, many times and it has all become rather ho hum. But.then we brew a pot and quickly realize, this is the epitome of green tea. We marvel at the perfection of flavor and aroma and then look into our wallet. Ha! Superlatives and Grief!

No doubt real long jing is expensive. This tea is actually not a real long jing because it is actually produced a ways outside of Hangzhou, although it displays many similar characteristics. Lighter on the wallet perhaps, but still a real treat.