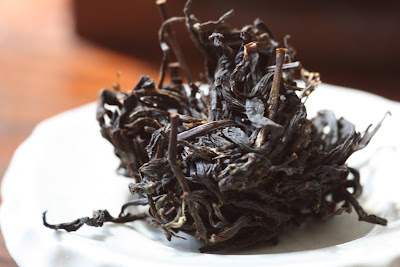 Joytea was the first Korean tea company to begin selling ddok cha a few years back. Before this company started selling ddok cha, it was only available from small family and temple productions. Joytea has gained some notoriety in the last two years in Korea by promoting its traditional hand made product, by winning some tea awards at tea festivals domestically and in Japan, and by certifying its tea plantation with the highest level of organic certification available in Korea. As a result, the price of their new product has almost tripled since 2008.

This sample of yellow tea disk type ddok cha actually didn't come from a disk at all but came from a 100g bowl/ bell shape (click here for a picture). This tea can also be purchased in a five pack that is strung together with Korean traditional paper straw and wrapped in bamboo (click here then scroll down for a picture of this packaging).

This Yellow (Bal hyo cha, Hwang cha, semi-oxidized tea) disk type ddok cha is only classified as "ddok cha" because the final step of production involves the tea being pressed into a cake. It is truly a yellow tea pressed into a cake form. The product description on joytea's web page describes the normal production for a Korean yellow tea which involves oxidization by vigorous rubbing on a rush mat and withering until the desired level of oxidization is achieved, in this case 60% oxidization. This tea is then shaped into a cake.

This tea is a bit of a rarity because it is the only yellow tea one has ever came across that is cake pressed. Generally Korean semi-oxidized teas don't possess the strenth nor the depth acceptable for aging. All other ddok cha that one has encountered is essentially pressed green tea. So this tea is a bit unique in that respect.

The kettle shakes as water boils, one closely examines this sample. It smells of sweet raison and is composed of long, straggly, dark brown with slight red tinged leaves. 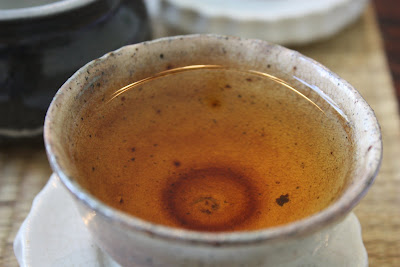 The first infusion is prepared with water that was cooled for a short time. It is full of light, watery, plumy tastes. Its mouthfeel is soft and huddles on the middle of the tongue and front of the mouth. The aftertaste is light, fruity, and dry but has a dusky finish that hits at a grittier bottom. 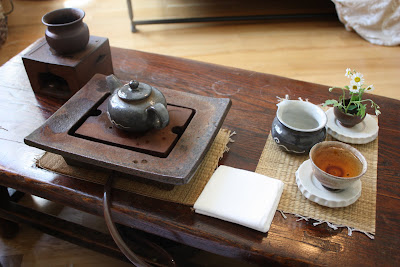 The second infusion is plumy also peachy at first then fades somewhat into dryness in the mouth. The mouthfeel is more at the front but feels full enough there- nice. 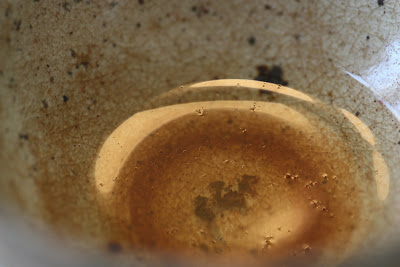 More water is boiled up and the third infusion is prepared. It tastes fruity but at the same time soft, gritty, grainy, and dry. The flavour of this tea is fairly stably throughout infusions. The mouthfeel is now coarse and dry.

The fourth infusion is enjoyed as light spice flavours mix with slight fading fruitiness. The mouthfeel becomes tart, dry, and a touch gritty. 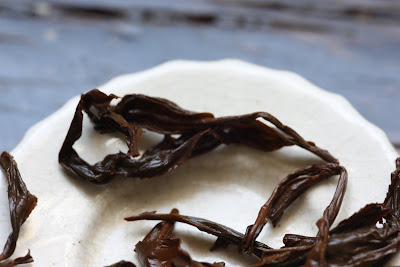 This tea continues on for a few more infusions but doesn't offer any real change in its profile other than becoming more watery and flat. Strangely it offers some strange soft fermented-tea like depth in its aftertaste even as its flavours are quick to fade.

Matt, I have a single 2008 Joytea 100 g bowl that has a similar label but I don't read Korean and have no idea what I have (sorry, no camera). Does Joytea only process yellow tea in this shape?
I also have a package of what seems to be two little Joytea logs, also from 2008. I haven't opened the bowl or the logs because it was recommended that I let them age like puerh. Any idea of what I might have here?

Okay, having scrolled down farther and feeling through the leaf wrapping the tea, I'm guessing the "logs" are the coins you describe. Let it continue to age? I have a nice Korean celadon pot awaiting the day. :)

Was thinking of you as one wrote out this post on Joytea.

One can say that the "alga cha" (semi-fermented tea, "bal hyo cha", yellow tea) is most definitely this Joytea "Bal hyo cha" (yellow) disk type ddok cha because it is the only shape that joytea uses for its yellow tea ddok cha.

The other tea that you have is definitely the Joytea coin type ddok cha which feels like 2 logs wrapped tightly together then wrapped in paper. If you remove it from the paper you will see that they are actually a bunch of small coin cakes strung together with string. One will review this 2008 coin type ddok cha in the near future.

As far as aging this tea- it is probably more fun to try some now and every year or few months try it again to see how its aging.

You might want to check out the last article on ddok cha for some suggestions on how you might trying brewing the coin type.

Matt,
I am curious about the device your teapot is resting on in the 3rd picture down in your post. Is this some sort of warming device? What is it made of?

Check out this link:

Thanks, Matt. I'm guessing that both teas are yellow because the aroma I'm picking up through the wrapping doesn't suggest green at all (black, actually). Does Joytea process green tea in either or both of these shapes?

The coin type ddok cha you have shouldn't smell like green tea at all especially after being aged for 2 years. Because it undergoes oxidization from its production of being beaten into a pulp and then from its aging, it will smell closer to a puerh or black tea.

Thanks Matt. One of the reasons I wondered is because of this eBay listing (which, if my currency converter is at all accurate, seems awfully inflated in price): http://cgi.ebay.com/Korean-Green-Tea-Jiri-Mt-ARUGO100g-World-grand-contest-/220634199306?cmd=ViewItem&pt=LH_DefaultDomain_0&hash=item335ed2b50a .

The mark up is ridiculous. Back in the summer of 2008 these cakes were selling for 28 000 KRW at Joytea which makes this an even harder purchase.

There is a shop in Insadong which sells a packaged tea from Hadong they call 'black tea'. It is loose leaf, not a cake. I bought some to taste what a black tea from Korea would be like. I could not tell any difference from it and yellow tea, balhyocha.

For excellent balhyocha, $30/80g seems to be about right. This is a nice tea offering such a different flavor profile from the green teas of Korea.

It's funny you mention that because one has been typing out notes that one will post in the coming days clarifying the production of "bal hyo cha" as there seems to be much confusion as to whether "bal hyo cha" is an oolong, a black tea, a red tea, or a yellow tea!

Your right though, no matter what it is classified as, it all tastes very similar.