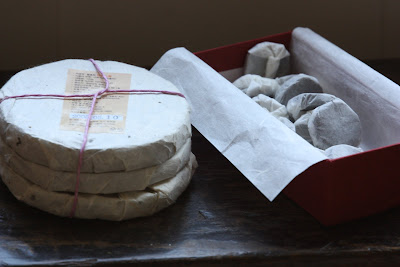 Ddok cha (tok cha, ttok cha, dok cha), a rare and very traditional form of tea produced in Korea, has drawn the attention of the tea drinking community world-wide. Besides the information on this blog and a wonderful article by Steven Owyoung on Cha Dao, little has been written about this interesting tea. Of what has been written, there seems to be some confusion as to what constitutes a tea being ddok cha (see comment section of Cha Dao article).

Ddok cha, simply put, is Korean cake tea. Under this definition any tea from Korea that is pressed into a cake can be classified as ddok cha. Because of such a broad definition, you may be thinking that there must be an infinite number of different sizes and styles of ddok cha. Not really. In ones experience with this type of tea there seems to be two types of ddok cha. These two types can be classified by different appearance, production, preparation, and flavour profile. 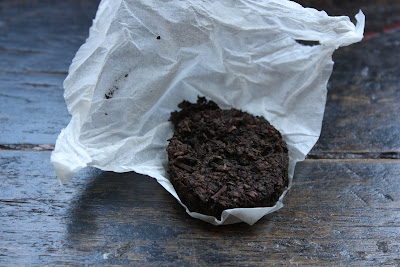 The first type is the coin/ heavily pounded type. The coin type is about the size of a fairly densely packed silver dollar coin and many are often strung together, through the middle, like the way you would picture old Chinese coins. According to Brother Anthony of Taize, this type is sometimes referred to as "yop jon cha" or cash tea.

This coin type goes through the last steps of its production by being pounded with a large wooden mallet on large wood planks or pounded mortar and pestle style using large wood logs in a large stone bowl. When the tea is reduced to a gunky pulp it is placed into moulds, dried to form, and quite often strung together. A picture of traditional moulds can be found on the bottom picture of this post by Toki of The Mandarin's Tea. Click here for a detailed video outlining the production.

The coin type ddok cha is best enjoyed the traditional way, a way very similar to the way Lu Yu describes Chinese Tang Dynasty tea in his book The Classic of Tea (circa 760-780 AD). Click on these posts on Cha Dao and A Tea Addicts Journal of attempts to make Tang tea with ddok cha.

The traditional way of preparing coin ddok cha involves roasting, breaking, then boiling (or at the very least long steeps with just off boiling water). The roasting stage is quite important because if the tea is over roasted it will loose its essence or even taste burnt. On the other hand, if the tea is under roasted its full flavour can't be appreciated and the tea may be too bitter. It is ones understanding that some Koreans roast the whole coin and others break it up first and use unique teaware, a ceramic tea roaster, to roast the tea.

A Korean tea roaster looks much like a ceramic Korean tea warmer. Fitting with the style of southren wares it looks very rustic and natural and usually looks almost stonelike. It is hollowed out and has a place where a tea light can be placed. On top there is a hole, into which the conical metal or sometimes ceramic piece is placed over. The cone is placed right over the tealight. Tea is added into the hollowed out cone and is roasted there. Stirring is required to distribute the roast evenly across the broken tea pieces.

After the tea has been roasted to perfection, the tea is either broken into pieces (if it hadn't been previous broken) then it is added to either a kettle (sometimes a ceramic kettle) on very light boil or it is steeped in a tea pot using water that is just off boil. After boiling in a kettle, place a clean hemp cloth over a cup or serving pot and pour the tea through the hemp cloth so that the froth and teabits are filtered out.

Its taste is spicy, medicinal, and bitter when prepared in this traditional way. Due to its tighter compression, crushed composition, and more extreme preparation, aging coin type ddok cha tastes much better as it mellows with age. 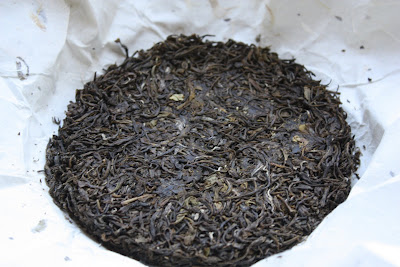 The other type of ddok cha is the larger disk/ pressed type. Usually about 100 grams of tea are pressed into a disk shape that resembles a mini bing but can also take other forms such as bell shapes or ball shapes similar to tuo cha. The compression is not as tight as the coin type ddok cha. These cakes are wrapped in traditional Korean paper and are often tied together with hay or bamboo string in groups of 3s or 5s or wrapped in bamboo leaf similar to a tong of puerh.

Unlike coin type ddok cha, disk type ddok cha doesn't get pounded to a pulp. During the last steps of its production it is either pounded lightly or pressed between large wood planks. After the right amount of tea is measured out then it is often pressed by planks into form.

The disk type ddok cha is prepared in a Korean ceramic tea pot. It is wise to not use just off boiling water for young cakes as the tea can still be a bit bitter if prepared in this manner.

Fresh disk type ddok cha tastes somewhere between a Korean yellow tea and green tea. Due to its loose compression, it ages quicker than the coin type. Its full intact leaves allow for much less bitterness and more full flavoured profile. With age this tea gets much more mellow in taste, stronger in qi, and more floral in nature.

To avoid confusion on the topic of ddok cha in the future, one believes that ddok cha should be referred to using these subtypes- coin ddok cha or disk ddok cha.

I've been thinking about ordering Ddok Cha from Martin Spimr's Teamountain for quite a long time and this post even increased my curiousness and made me even more convinced that I have to do so in the near future.

The only ddokcha I've ever had was from Petr Novak who sent me some along with some ceramics I purchased from him. This was the coin type, I beleive. Not so good, IMO. The larger cake looks like it could be promising.

In Korea, I never saw any ddokcha for sale and when I asked people if they knew where to buy, no one knew of a source. So, I would concur on its rarity.

He is the only western dealer who sells ddok cha- it is the same disk type ddok cha pictured above and the same ddok cha that one sent samples out to fellow bloggers a few years ago.

Yes, it is so uncommon that most Korean people have never heard of it, especially those in Seoul.

You are right, the difference in taste between the coin and disk type ddok cha, is quite remarkably different. That is why there is a need to differentiate between these two ddok cha types.

Here is a link to the post on the disk ddok cha that Martin is offering:

Keep in mind that this tea has had two years to age so definitely looks and tastes much different.

Thanks for the links; I remember reading your post on it and, also, some conversation about how would this tea age - Martin Spimr recommends this tea for aging on his website and, therefore, I think it would be an interesting experience to try it now, two years after it was produced. I drank a lot of sheng puerh-s, both fresh and aged, but Ddok Cha would be a brand new experience for me.

There is a high possibility that I will order it in the near future. I'll be sure to write a post on it, then ;)

One is also hoping to write up a post on aging ddok cha some time soon.

Great post. The timing of this is amazing, because I was just talking to a friend not two nights back about finding a good place to buy Ddok Cha, as I've been curious about it for a very long time now. Thanks for furthering my tea acquisition disorder.

There is only one treatment that has been proven time and time again to work for tea acquisition disorders...

Nice post Matt, as usually. Although I am writing here after few months I read and enjoy your blog regularly.

Ho Go- the sample of ddokcha was from the large cake from Martin Spimr, not coin type. I like it but you are not alone who is asking why I celebrate this tea. Well for first time I was also thinking that is interesting only because the story (unusual Korean pressed tea...) but by the time I like it more and more.

Nice to hear from you again.

If if came from Martin, then it is the same cake that one linked in the above comment. No doubt that ddok cha can be celebrated simply because it has been produced the same way for so long- somewhat of a rarity in the world of tea these days. But it does taste rather different- an acquired taste if you will.

Petr, How was Mungyeong this year? Caught some photos on Morning Crane Tea:
http://morningcranetea.blogspot.com

I have enjoyed Mungyeong Chasseball festival a lot. It was diferent then before but again inspirational, informative and relaxing at onece. After festival I have visited with my friend Hadong county, Hwagae valley tea plantations. Your advices what to see and where to go were really helpful. Thank you. It was during harvest so we see more then we expected- but no ddok.cha haha.

May be in near future there will be post on http://morningcranetea.blogspot.com/ about this trip.

Will be on the lookout for upcoming posts.

Petr, sorry for the confusion about the ddokcha. It was a small piece you sent and i didn't realize it came off a larger cake. But, really not memorable for me in any case. Maybe one that is aged several years will have more appeal to me. I think I'll stick with Puerh for my pressed teas.:)

Ddok cha has nowhere the depth nor complexity than a good puerh. Comparing puerh to ddok cha is like comparing apples to oranges.