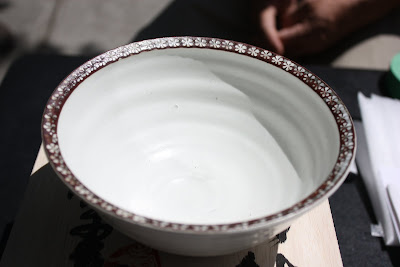 There was a large art festival just down the block last weekend. One was anticipating conversation with one of the artists there, Tosiichi Suzuki. He is a ceramics professor at Yokohama College of Art and Design and specializes in 'Sam Do' (Jap. mi si ma) style. He had a few pieces on display.
This tea bowl is a very clean example of 'Sam Do' style. Although beautiful, this bowl is a bit too 'clean' with very little wabi sabi to value. Japanese potters have always had these problem when trying to recreate classic Korean styles. It has much to do with the mentality of Japanese compared to the mentality of Koreans. It is definitely a social thing and not an ability/ skill thing as there are many mind-bending potters in Japan.

Tosiichi Suzuki discussed his firing technique- 900-950 Degrees gas fired for 10 hours, oxidization firing from 1230 and stopped at 1250. The very clean, almost sterile, feel of this bowl is mainly due to the fact that it is gas fired as opposed to wood fired. Wood firing breathes so much life into the pieces. 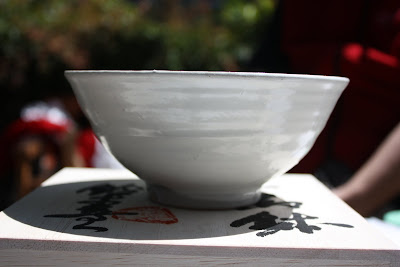 The shape, foot, and feel of this bowl seem too perfect as they kick up the sun's rays creating a white heavenly glow. 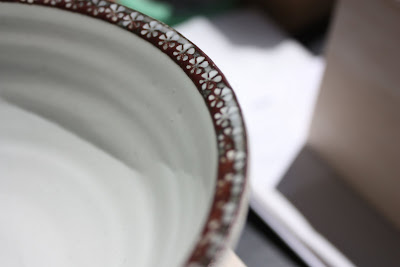 The flowered lip is the focal point of the bowl. The small stamped flowers fade in and out of the oxidized rim, no two are the same- each one is admired. 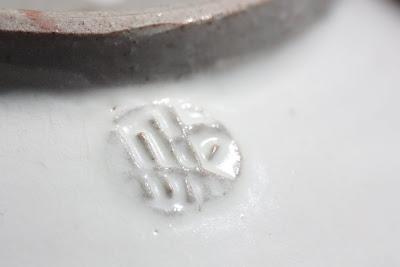 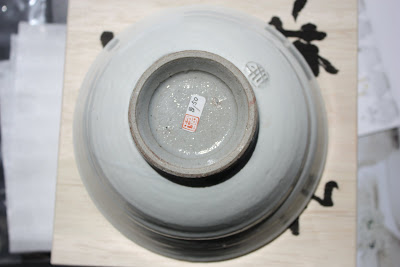 Give me wood fired pottery anyday. Even though they are often "flawed" by the unpredictable fire. The same piece can often be beautiful on one side and on the other side quite hideous. But every once in a while you get that perfect piece that was blessed and shines like a jewel.

One prefers that perfectly imperfect piece that is blessed and looks like it could surely blend right into a pine grove.

You bring up a good point. It takes some practice sometimes to differentiate between a master's piece that is wood fired vs gas fired.

Check out this post and the interesting commentary that followed on wood vs. gas firing;

Though it looks very clean now, from what I can see of the glaze, it may well be a very different bowl after a few years of use. Karatsu bowls are similar, even the wood fired ones. If you see any of Nakazato Shigetoshi's work you'll see this clean look even in his wood fired work. But, the work is designed with the process of using it in mind, and to improve with that use. I'll bet that even Kizaemon wasn't nearly as impressive when it was new.
The flowers around the rim give me the impression that when he made the bowl, he was channeling his designer self, rather than his potter self.

Matt, Just moved to Toronto from the States and found your blog while looking for a local source for Marukyu-Koyamaen matcha. I see you're on the west coast, but I was wondering if you know of any mail-order companies in Canada from whom I can order my matcha. Back home we had matchaandmore.com... They ordered once or twice a week from Japan and then shipped the tea immediately to their customers. Hoping to find a similar situation here. Thanks in advance for any info and direction you can provide.

Glad that you mentioned about the change the bowl will go through because last night one was thinking of that.

One pictured the person who bought this bowl upset that it was developing some blotchy staining inside that sprung up like a rash. The tiny hair-like cracks on the inside that were once invisible started to become apparent. The person, new to this style of ceramics, contacted the artist demanding his money back. Hahaha...

This bowl will eventually show different stages of aging that will undoubtedly add to its beauty.

As far as the little flowers on the side, they are an important element of the 'Sam Do' (Jap. 'Mi Si Ma') style. Although they look a little 'designer' or 'crafty' they are actually a very serious (and manly potter) aspect of this classic Korean style.

Checked out www.matchaandmore.com. They have really good prices and carry all of the grades. Don't know of any place that sells MK matcha online in Canada, especially not one that offers all of their grades and for such reasonable prices! Seem to recall finding one retailer that sold Aoarashi for $28- a bit high. If you find anything please let one know.

On the other hand, if you wish to try a different brand, there is a great local option based here in Victoria that offers great quality matcha sourced directly from Uji- www.jagasilk.com. They get a fresh shipment in every month or so to guarantee a fresh product. One hopes to review their matcha throughout the year here on this blog.

Matt,
Yes, good link to that older post with their comments. I think many people are aware of what wood can give you, but, perhaps there are fewer folks who have understood how to duplicate or come close to woodfire with gas. Seong-il was pretty adamant about it. I also happened to meet Yi Tae Ho(I believe this is his actual name, not Lee). He is a good friend of Seong-il and is a great potter. I simply ran out of funds for more purchases but he is at the top of my list when I go back. His soda fired work is great. His link is http://blog.naver.com/1015thyi

Thanks for the link. Never saw his 'tae soo gi' (dirty water bowls) before. They are so interesting!

The transliterations on this blog are a bit squeaky. "Lee" and "Yi" are both the same just transliterated using a different method. But it seems as he is going with "Yi" so one aught to make that correction in the blog- thanks for the heads up.