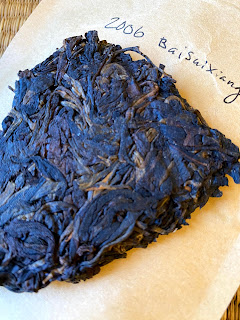 In reading the reviews a long time ago, I always found it curious as to why this 2006 Yang Qing Hao Baisuixiang ($170.00 for 500g cake or $0.34/g- a price which hasn't increased in 5 years) was always overshadowed by the 2005 Yang Qing Hao Cangliu which is a touch more money.  In drinking these two back to back I hoped to find out why…


First infusion leaves still haven’t opened but a creamy thin veil of sweetness over a leaf almost sour taste is emitted.  It has a cereal sweet finish in a watery sandy mouthfeeling.


2nd infusion has a woody onset with faint creamy thin veil of sweetness once again.  The light sweetness is longer but thin.  There is a leaf and wood base.   The mouthfeel is sandy in the mouth with the throat opening a touch in the upper throat.  The dominating note is flat leaf and wood with a bit of sweetness that trial through.


3rd infusion has a bit thicker woody, still not too thick but a long veil of sweetness in woody leaves.  There is the start of a maple syrupy suggestion in this infusion.  The aftertaste is simple and long creamy sweetness.


4th has a deep rich woody and maple syrup and vanilla onset that reminds me of a Scotch over a mixed in pungency.  There is a long maple syrup sweetness in the mouth.  This infusion is very very tasty.  The throat feel is mid throat and the mouthfeel is sticky and slightly sandy.  The aftertaste has a candy like transformation that is long in the mouth.  The Qi is mild and makes the body a bit heavy feeling and the mind slow.  The Qi has a light and airy feeling in the mind despite the heavy body feeling.


5th has a thick woody syrupy onset with a dense maple syrup sweetness with hints of vanilla and almost coco with fallen leaves.  The mouthfeel is sticky and throat opens medium depth which holds the thick deep rich flavours in place and offers a long faint candy sweetness barely detectable underneath along with faint pungency.


6th has an almost berry, deep fallen leaves, deep fallen woods but has an overall rich sweet maple syrup sweetness.  There is a rich coco finish that turns pungent into long sweetness.  The mouthfeel is nice with a thick powdery chalkiness that really coats the mouth.  There is this lingering camphor coolness with faint candy sweet breath finish minutes later.  The Qi is felt on the face, limbs heavy, mind is light, acuity sharpened with a free feeling Qi.


7th has a coco fallen leaf onset with a back seat of less sweetness there is a low lingering pungency and muted sweetnesses.  The sweetness has fallen off a bit here and simpler taste are left which have a bit of a rich aged note as well as woody sweetness.  The mouthfeel is less here as well.


8th has a bitter coco onset with woody leaves and a faint pungency underneath in the upper throat.  It hold a very mild woody sweet aftertaste.  The mouthfeel is slight dry, chalky, and almost sticky.  The Qi is a bit relaxing and muddling in the mind. 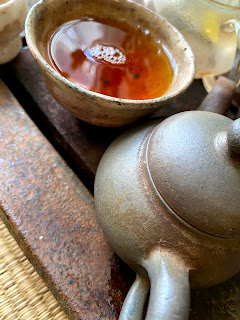 The 9th has an almost sour brassy wood onset.  There is not much sweetness that can work its way through.  Mahogany woody base, leaves, aged taste, slight sour edge, slight bitter coco, hidden sweetness and pungency coolness.  The mouthfeeling is more dry/sticky and makes the lips sticky.


The 10th has a rich woody almost syrupy sweet density to it after letting the cup sit 10 min.  There is a lot of wood taste here, slight bitter coco, pinned down/faint sweetness that tries to develop with pungent returning coolness.  Qi is heavy in head and body and eyes with a tiny bit of pep. 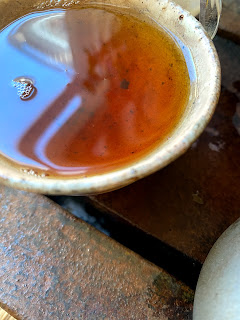 The 11th thick liquor pushed out with a woody almost coco bitter backbone with almost dark syurp not-that-sweet suggestions.  The taste feels really full but mainly full of woody and leaves and aged suggestions with not too much complexity or sweetness.  A nice Qi though, not overly strong but kind of complex with multiple body feelings.  Mouthfeeling is dry and slightly sticky throat opens at top only now.  On a very windy day I am strangely enjoying this puerh.


12th deep woods and nuttier suggestions of chestnuts and almond there is a slight sourness and slight coco bitterness in there.  The sweetness is buried in this one with edges appearing among fallen leaf and woody dominating tastes.  The liquor has a fuller thickness but not too thick and the mouthfeel is sticky and almost dry but not overwhelmingly so.


13th has a sweet woody onset with an underlying chestnut taste and subtle sourness.   The mouthfeel is more slippery but not overly stimulating here.


14th has a mellow woody sweet almost leaf and dirt suggestion.  There is very restrained sweetness and pungency that is hard to find.  Qi is mellow here with subtle but heavy body sensations.


15th has a coco and woody fallen leaf taste with almost nutty suggestions.


Board with this one and in need of a big burst of energy, I put it into long steepings… 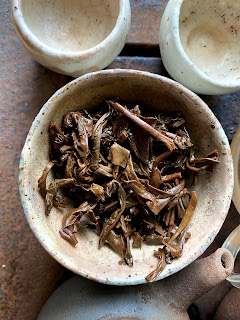 Overall this puerh has a strong and distinct Autumnal puerh feeling. I belive that it contains mainly Autumnal material.  I find it interesting that it is a blend because the taste is pretty stable and consistent.  There is a few infusions that are very very flavourful and quite satisfying to me but the engaging flavor drops into something more stable and narrow mid-session and never seems to recover.  These earlier infusions also have a deeper throat sensation.  The Qi is a bit complex and suggests blending because it does a lot of things.  But the flavor is solid likely mainly Autumnal puerh material.


To compare to the 2005 Yang Qing Hao Cangliu these are very very different puerh.  The 2005 Yang Qing Hao Cangliu is much more complex in both taste, mouthfeeling, vibrancy, and Qi.  The complexity of this blend is apparent.  The 2006 Yang Qing Hao Baisuixiang is a much deeper, richer, and more unchanging puerh.  In some ways it is stereotypically autumn gushu very solid, deep, and reassuring in this sense.  Some people who like deep and rich might even be more satisfied with the Baisuixiang, it definitely has its charms.  The main issue with this cake is that its gets too simple too early in the session which is too bad because I liked what I saw in the early infusions.  Due to the lack of stamina, other Yang Qing Hao options seem like better value but they are all more expensive.
A Tea Addicts Journal (Marshal'N's) Tasting Notes
TeaDB (James')Tasting Notes