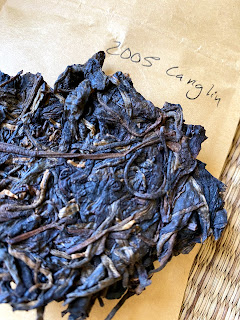 
Dry leaves smell of deep distant dried flowers in a musky base.  The purple colour of the leaves is interesting and unexpected.  Why purple?


The first infusion has a dried hay, wheat grain, grainery woody onset.  The mouthfeeling is watery.  There is a mineral taste then some very insignificant grain sweetness.


The second has a woody grain onset with faint dried flowers on the breath.  The mouthfeeling is watery and throat is not very simulated at all.  The flat grain taste has a touch of pungency.  A malty gain profile with not really any sweetness dominates.  This reminds me of a note of Korean roasted barely tea.


The third has a very malty, grainy onset that ends a mild pungency and a powdery ghostly dried flower barely sweetness.  The mouthfeeling is watery and slightly sandy.  The throat starts opening to the pungency and a longer aftertaste of malty sweetness, barely tea, is the result.  This infusion feels fuller in the mouth and throat and interacts with grainery sweetnesses.  This infusion there is a lingering honey like faint sweetness that follows.  Still grainy, slightly woody, and malty tastes dominate but a complexity starts to reveal itself underneath.


The fourth has a thick syrupy sweet malty almost cherry but definitely grainy onset.  The taste has complex interplay between grain, wood, hay, cherry, malty, dried flowers.  The monthfeel is sandy in the mouth but the liquor doesn’t maintain the full feeling.  There is a mild pungent then sweet hay dried floral taste.  The Qi is a bit mild and has a relaxing effect in the body.  I feel a slight heaviness behind the eyes.


The fifth infusion has a malty grain berry woody and hay sweetness.  The mouthfeel is sandy and never feels satisfying full but does the trick at maintaining some flavours.  There is a nice variety of tastes in a watery slight sandy feeling mouth.  There is a thinness about it. Mild pungent then hay and dried faint return.


The sixth infusion has a nice creamy woody cherry hay mineral… on man that initial complexity is really really nice… the mouthfeeling is mineral, slight faint sand, not too thick but satisfying.  Thin veil of coolness wild returning complexity.  The breadth of this blend is really obvious and satisfying here.  There is obvious autumnal nuances as well.


The seventh is more watery and less thick at the onset.  It has like a slight juiciness to it which is new, slight sour now but still lots of hay, wood, cherry, the pungency is deeper into the throat and this infusion pushes out a longer underlying creamy sweetness.  The mouthfeeling is more chalky here too although not super thick.  The Qi is a relaxing Qi.  I can feel it a bit behind the eyes.


The eighth infusion has a chalky cherry like onset then develops woody, cherry, less hay, is more astringent now on the tongue and in the mouth.  There is along faint chalky powdery creamy sweetness.  Relaxing qi with face sensations. 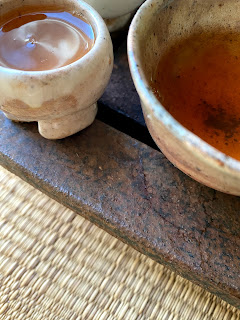 10th starts with a faint malty, slight woody, and almost cherry fruit approach with mineral and wood underneath.  The infusions are becoming less sweet as we go here.  There is a faint pungency with faint returning powdery sweetness.


11th starts a bit juicy non-sweet fruit, its kind of bitter and almost astringent here with mineral, woody, the mouthfeel is a sandy chalky without being overly full.  There is a slow to emerge faint pungency then low sweet hay like creamy powder.  The Qi continues to be relaxing with some body face sensations.


12th I start pushing it to 30 seconds added to the infusions mainly because I feel this has a bit of complexity to push out and its getting a bit stable… it get more deeper woody, deeper cherry with mineral and wood, slight camphor mild powdery talc and woody finish.


13th is another flash steeping… is a bit subtle fruity juicy sweet initially with less woody or astringency.  Longer cooling powdery creamy sweet finish.  I like these lighter fruitier flash steepings rather than the deep woodier longer steepings here.  Mild relaxing Qi.  Less mouthfeeling and never that much throatfeeling.


14th leathery generic aged sheng onset with a movement towards juicier fruitier things underneath with a mineral base taste.  This infusion has a bit deeper throatfeeling sort of a chalky powder mouthfeeling which leads to a longer pungent finish with longer creamy talc faint sweetness.


15th is generic leaves and woody and leathery aged puerh taste.  Slight cooling finish then not much sweetness.  Mouthfeeling is dry here.


16th has a juicy woody onset with simple taste.  Not much other than a touch dry mouthfeeling.  Some bland mineral left.


17th goes for 1 minute steeping and pushes out some woody cherry fruits in a dry chalky mouthfeeling.  There is some mineral in the base taste.  The dry mouthfeel mainly gives off woody aged notes. 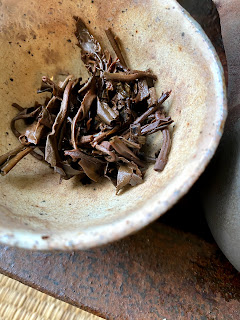 The overnight steeping leaves lots of complexity in the cup still.  Lots of delicious fruity sweet notes and a certain thickness and viscosity.  This is a very complex blended puerh for the price.  But it lacks a full feeling overall.


The mouthfeeling changes a lot infusion to infusion which makes this puerh really unique as that is not that common in puerh.  Usually it’s either slowly changing throughout the session or is relatively stable.  This is also true for the complex taste.


Vs 2006 Yang Qing Hao Qixiang.  I had these two back to back and the Qixiang wins hands down.  For the price its worth it over the Cangliu.  It’s a much more vibrant, fuller feeling and with a certain thick almost astringent deeper throat taste.  Lots more barrage of high notes and sour.  The 2005 Yang Qing Hao Cangliu has more space and distance between the notes which make them feel more like lots of individual parts.  The Qi is much stronger in the Qixiang too with a very strong relaxing component.  The Canglui has some interesting bodyfeelings which alternate throughout the session and overall feels more complex but less complete than Qixiang.
Overall this is  Cangliu is a very engaging puerh for its price that is for sure.