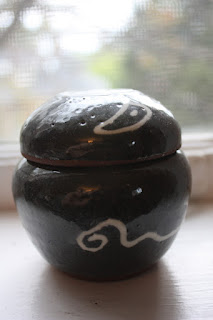 After re-roasting some stale green tea last month, a large portion of the nicely roasted tea was stored in a ceramic tea jar by master Kim Kyoung Soo. The tea jar was filled about 4/5 full of this green tea. Every week one tried some of the tea in the jar to see how this re-roasted tea evoloves. Below are some general comments on how this tea changed over the course of the last month.

In the first week of storage the green tea lost some of its superficial fire, that roasted quality which tastes as if the tea just came out of the pan. The other characteristics of taste, smell, mouthfeel, and qi sensation were holding from the re-roast. Higher notes did not become more vibrant but were more noticable without the roasted tastes stealing attention away. This is often refering to as "mellowing"- where the superficial fire is given time to disapate and the balance of the yin and yang of tea solidifies.

Into the second week of storage this tea held its own but started to wane near the end of the week. Into the third week this tea developed soft brackish, bitter notes which resembled the tea prior to re-roasting. Its qi started to turn as well, becoming more stagnant in the guts.

After the third week the tea continued to move closer to where the tea was before roasting. In the fourth week the tea has become pretty undrinkable once again with a qi which beats down on the stomach and abdomen. It is said that the longer the roast or drying the longer that the properties of fire will remain in the leaf, this is as true for initial production as it is for re-roasting.  This tea had undergone only minutes of re-roasting which may have lead to the short lived changes in the tea. 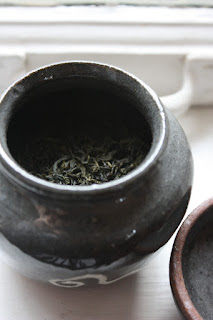 It should be noted that the ceramic Kim Kyoung Soo tea jar was not sealed air tight. As the month passed less and less tea was taking up space in the jar and the tea consumed later would have been exposed to more air as the lid was opened every time to fetch more tea. Perhaps next time one re-roasts some older tea there should be some type of control- a zip lock bag to compare.

Nice experiment! I have always problem that greens are getting older faster than I drink them- you give me an idea what I can do about it:) Few years back, I was on tea presentation- workshop of one Japanese tea master who started the event with roasting sencha in small ceramic roaster (with candle under kind of cup). His helper was working on it for an hour and then he prepared the fresh "hohicha" for us. It was pretty tasty. He told us that what he do with old greens and then drink it during or after meal...

Instead of ziplock bag I would recommend two similar jars- one sealed.

Think all green tea lovers and dealers grapple with this problem of freshness. The best solution to this problem is to only open one bag/box of tea at a time and buy only enough green tea that you could finish drinking in the summer.

Think the device that the Japanese man used was a houroku. See here: