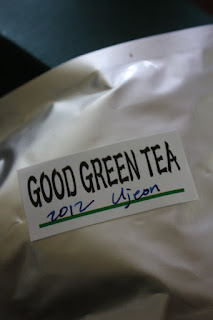 Those who drink Korean tea and look forward to the first teas of the season have to wait longer than those who prefer Chinese or Japanese green tea, but, hands down, the wait is worth it! This year's long wait was broken by a shipment of tea from Sam at Good Green Tea. In it he kindly gifted some Ujeon from his personal stash. He refused to reveal any background on this tea until one had sampled it so here we go... 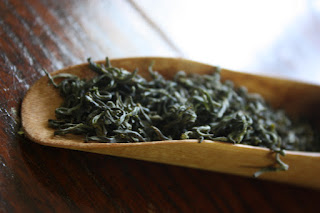 The very small dry leaves smell of rich sweet berries. These leaves are added to a warm pot and the session commences... 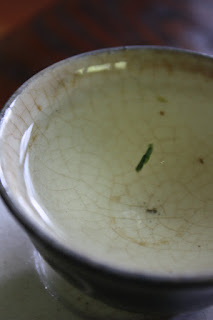 The first infusion starts with an initial sweet taste which has a very light, creamy-forest fingerprint lingering underneath. It contains a long, cloudy, ethereal-creamy sweetness in the finish. The mouth salivates. The mouthfeel is soft and juicy from the push of saliva. A cool, fresh energy vibrates within this first pot cooling the feet and face like a soft breeze. 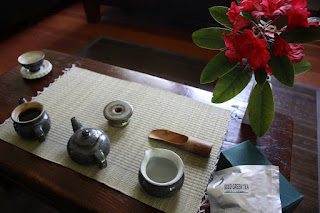 The second infusion carries a noticeable depth of fresh, deep forests and a fruity berry vagueness. It develops into a creamy-richness. The aftertaste slowly evolves into a berry-forest taste, even cantaloupe notes are revealed later. The mouthfeel is full but fluffy in the mouth. 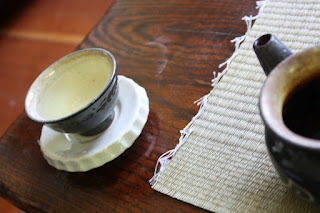 The third infusion has a noticeable full sensation in the mouth. A foresty depth appears first then evolves into an almost creamy-sweetness with elusive fruit high notes just lingering below. These tastes seem to appear more distinctly minutes later as the tea stimulates the cheeks, roof of the mouth, and back of the tongue. The depth of the soft mouthfeel reaches into the mid-throat causing a small swell of saliva to ball up there.

In the fourth infusion creamy notes now seem to be more present over the forest notes however they evolve into a forest-sweet-berry taste which is hard to separate in the mouth. The forest is soft but a touch deep and the berries are high. The aftertaste is becoming more deep with heavier forest notes there and a subtle sweetness that can't quite evolve into berry-sweetness. This tea feels profoundly relaxing, the insides feel comfortable, the skin and extremities just slightly cool and light. The qi is tranquil and relaxing the head floats into the clouds outside. The mouthfeel maintains and that gloob of saliva still pools in the throat minutes after swallowing. 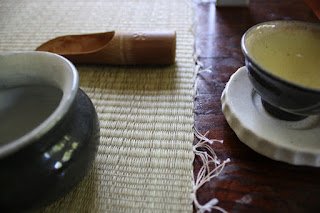 The fifth infusion is light, watery, creamy, and fresh initially then a soft light wave of creamy forest notes with lemon meringue edges appear in the soft taste profile.

The sixth infusion is watery and somewhat woody with a sweet-vague taste that doesn't fully develop nor does it fade away. There is a sour-citrus-sweet edge to the aftertaste with appears briefly then disappears just as fast. It leaves a forest aftetaste with slight sour-sweet edge. 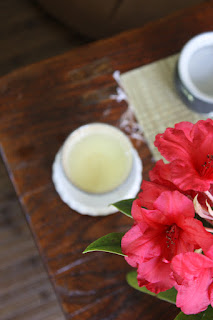 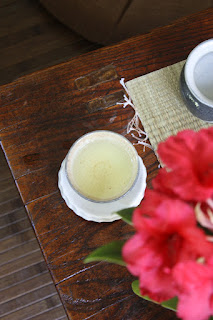 The seventh is much the same now with suggestions of spice which is almost unnoticeable in the soft depth. The aftertaste here is a soft mix of faint sweet and sour citrus fruit and berries, this taste is soft but distinct and delivers a nice finish. The mouthfeel and throatfeel hold nicely even late into the session.

The eight infusion is faint, creamy, still a touch of sweetness however the taste is fading and kind of just blends tastes over the whole profile, thinning its depth. There is still a slight muted edge of foresty, creamy, barely citrus taste to it but doesn't carry into the aftertaste. The mouthfeel and chaqi remain solid until the end. Ones mind is chill. 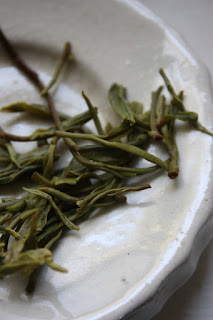 Edit (June 19/2012): Sam later revealed that this tea comes from Woomong tea garden in Hwagae Valley. It was picked the very first day of the 2012 season and is premium Ujeon. It is produced all by hand, semi-wild bush.

Ahhh, the start of your much-anticipated reviews of the 2012 Korean greens....

Will you be playing the field a bit insofar as vendors, or do you purchase from select ones?

Hope to sample a bunch and purchase a few. This may be the first year that one doesn't put a direct order in from Korea as there are so many great dealers in the West these days.

The first order already arrived from Sam of Good Green Tea and some samples should also be on their way from Hankook Tea.

Victoria is definitely not a green tea friendly climate, the weather has not yet broke past room temperature outside. It is a very different climate than Korea or even Canada past the Rocky Mountains. So selection of pricey green teas is always done after careful consideration.

Do you plan on trying a selection of Korean greens this season?

If finances permit, yes. The better half was fortunate enough to experience Saejak last year, and he loved it. We were hoping to get in on this year's harvest - probably saejak, and if not, definitely jungjak.

It was interesting comparing your tasting notes of the 2009 and 2010 Dao Tea Balhyocha with mine. Will you be experiencing that again?

Yes, hope to try some 2012 Butea (Kim Jong Yeol) teas when Pedro gets them in stock. The Ujeon green tea and Sunset (Jungjak balhyocha) are already available from Gabriel of Jiri Mountain Tea Company for those who can't wait: http://jirisan.webs.com/apps/blog/

Look forward to seeing your notes.