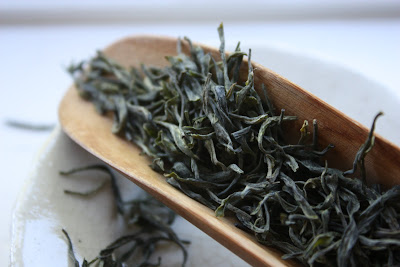 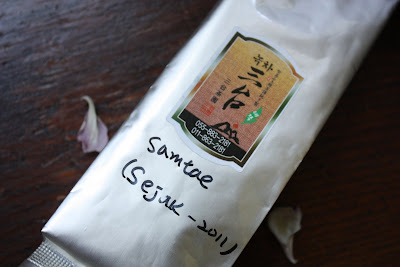 Before we get into the mix with this tea one will mention right off the bat that it is currently available from Martin of Tea Mountain. One has often been criticized for blogging about great Korean teas that are unavailable to the western audience. On top of this post the next Korean green that one will be posting about in the coming weeks will also be available to western audiences. Do please check out the updated list of Online Korean Tea Vendors for those who are interested.
A 40g sealed package of this tea was gifted from generous Pedro of Dao Tea. This year he hooked Martin of Tea Mountain up with his 2011 Korean teas. When drinking this tea a conversation that was had with Pedro came to mind. It involved musing about how much year to year variance there is with Kim Shin Ho, Kim Jong Yeol, and other small Hadong area producers' teas. Actually, it is quite hard to recognize the personal nuances year after year with these small scale producers compared to the more consistent offerings of larger, older, and more well known and established producers such as Jukro and Ssang Kye which still manage to do things in the traditional way despite their size. The wide year to year variances sure make for exciting tea sampling though. As it turns out this tea would be quite different than the 2009 and 2010 Saejak from Kim Shin Ho. So let's heat up the water and see what his hands and lands have presented to us this year...
Immediately following the opening of the foil pack the smell of dusky, deep, and frosted notes turn nutty and roasted. These odours are deep in the nose where a soft, frosty sweetness develops from these medium sized saejak leaves. 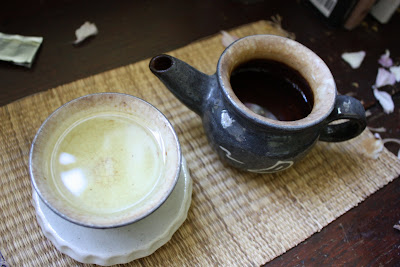 The first infusion is prepared and pours a vibrant clear green with just a slight tone of yellow. The initial taste is very bright sweet floral honey that is as vibrant and clear as its liquor. There is a milkiness to it as well- in taste and in feel. The aftertaste is light, ethereal, sweet, and long with suggestions of forest that is barely noticed among this light, sweet notes which gracefully dominate the mouth. The mouthfeel is as if the mouth is covered in soft silk.
The second infusion presents with a soft light body with distinct creamy-milky-forested taste and a sweet buttery finish. The aftertaste is sweet and somewhat buttery and hints at wild florals under the surface. The mouthfeel is full and now develops a very sparse, soft, milky texture in the mouth. The qi of this tea is soft and cool on this very summery early September day. One's feet and legs feel cool to the touch and ones mind feels cheerful and somewhat relaxed. 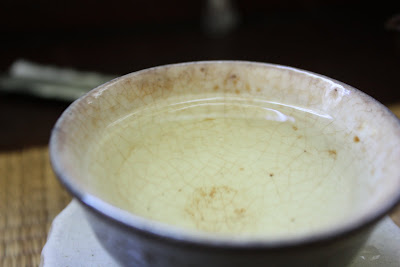 The third infusion has an initial taste of soft, light, creamy, buttery sweetness with a relatively deeper forest finish. Now the aftertaste shows more signs of deeper forest tastes but remains predominantly sweet, light, and long as before. Creamy fruit suggestions even find there way out as the minutes go by between cups. The mouthfeel becomes thicker here. If one didn't know better and ignored the leaf size, would have thought this an ujeon grade.
The fourth infusion remains light and creamy but is now a touch woody and contains a cool-fresh taste with an energizing creamy sweetness. The aftertaste is barely woody and mainly creamy and sweet with a light forest feel. Fruity tastes are noticed minutes later. The mouthfeel is full and is now noticed at the top of the throat. The mouth develops a soft dry quality. 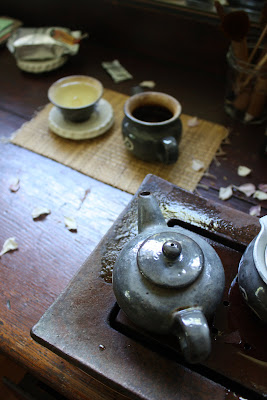 In the fifth infusion the soft woody notes start becoming more dominant than the creamy sweet notes. The aftertaste is becoming more dry and woody. It still has a large, creamy-fruity-sweet taste that lasts much longer than the woody aftertastes. These woody notes, like earlier infusions, drop off leaving subtler tastes in the mouth. The mouthfeel and throatfeel remain constant, very similar to the last infusion.
The sixth infusion contains a light, wood, sugary-floral initial taste. The initial tastes present lighter now but still full in the mouth. The aftertaste is smooth with sweet, fruity-creamy notes riding themselves out as before. The seventh is much the same with more wood notes developing here. 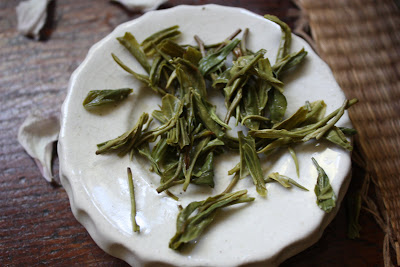 The eighth has woody and dry notes that are further developing as the mouthfeel becomes dry and loses some of its depth. Floral notes still remain long in the mouth.
Link to Michal Tallo's (Poetry in Tea) Tasting Notes
Peace
Posted by Matt at 5:28 PM

Matt,
I had a chance to try this tea in a teahouse more than a month ago and your notes helped me recall this pleasant experience quite accurately even now. Thank you!

That's right, one did read your review a few months back and have since linked it to the post.

One shares your appraisal of this tea:

" tea which exceeded the high expectations I had for it "

"had an amazing effect on body, harmonizing it in a way that left my mind calm, clear and yet sharp"

"In the end, I was leaving this magical place... the aftertaste of Kim Shin Ho's Saejak still present in my throat."

Thank you for posting this. I went to more than the usual trouble to find this tea, and then was disappointed by its difference from the last two years'. Your notes encourage me to let the comparisons go and focus more on the tea itself.

This tea was lighter and more subtle than years past- a quality that seemed harder to come across in Hadong this year. Enjoy!