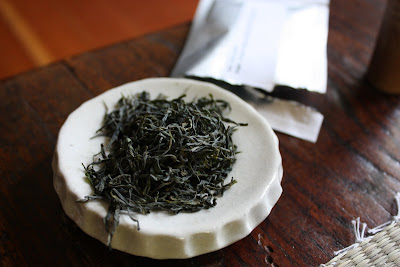 This tea came with a eclectic mix of sealed 2011 Korean tea samples from Pedro of Dao Tea. Currently, he is not selling any 2011 tea, he claims that big changes are coming to his always changing tea company.

Ujeon looses its subtleties so fast- a point is made at consuming this grade first. It has been a few years since one had tried Jukro's ujeon grade so one took a nice summer afternoon to spend time with it. Upon admiring the dry leaves one noticed that they seem slightly slightly larger and stringier than usual. Perhaps its just been a while? The odour that these leaves carry is of soft wildflowers and roasted honey nut scents with a lingering odour of deep forest and suggestions of somewhat chalky chocolate in the near distance. This is a beautiful smell. 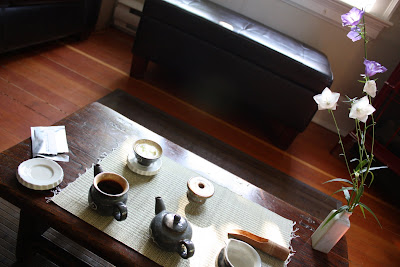 The first infusion is prepared in ceremony. A light, soft, sugar water and foresty initial taste shuffles to more forested depths before coming back with wildflower and subtle nut aftertastes. The mouthfeel in this light handed first infusion is thin and soft and coats the mouth, even thinner on the throat.

The second infusion is prepared just a slight bit stronger and is much more thick and presents first with a sweet, sugary, limey-forested-woody taste before fading into less woody but more rich forested tastes. The mouthfeel is still soft but is thicker with more goopy viscosity and nice stimulation in the mouth, a soft light stimulation of the throat. 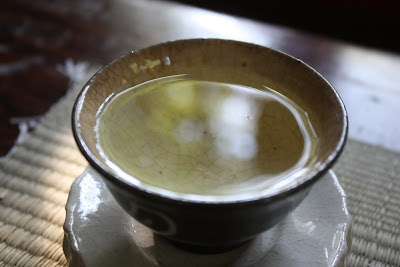 The third infusion is more of a balance between the first and second infusion. Adjustments to the way it is prepared, neither too soft nor hard, is likely the cause. The result is a tea that is thick but watery with subtle sugary and forest inital tastes. These lighter tastes turn into deeper forest tastes and finish lighter with a sugary forest finish similar to the inital taste. The mouthfeel continues to be thick but soft. The qi is light and slightly cooling- filling ones lower body in a cool sensation. The mind is less effected. 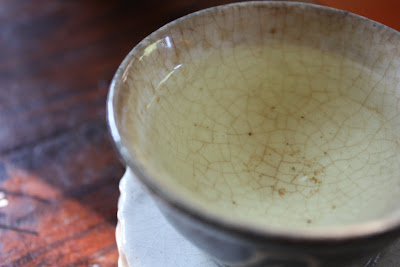 In the fourth infusion the woody sweet sugary thick initial taste turns toward its forest tasting base. The forest taste is less leafy and green and is now starting to turn slightly wood and green. Nice wildflower depth comes out of this taste followed by a subtle sugary sweet aftertaste. There are lime and wood notes as well in the aftertaste that trail these sweeter softer tastes, adding depth in the mouth. It is a nice deep and full progression of tastes.

In the fifth infusion woody and lime notes start to crowd the sweeter softer tastes. A tangy edge develops perhaps as a result of this conflict. The once sugary and pure sweetness has gone and there is a more subtle sweetness there now. The mouthfeel remains full but is now becoming more brisk. The sweetness now is felt more in the end of the flavour profile along with modest wildflower like florals and wood tastes.

The sixth and seventh infusions are less thick and more watery with wood notes becoming more dominant. All other tastes seem to weaken a touch and converge into a tangy-wood that lingers in the aftertaste. The mouthfeel starts to become more drying. 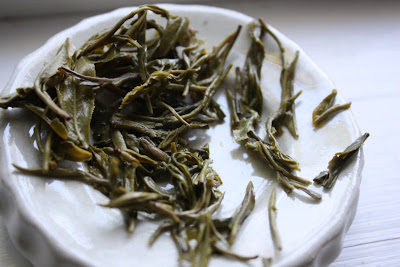 This reminds me I really need to finish the last little bit of this tea. I think I will go brew it up!

Its interesting as we described the tea similarly but using quite different words. I quite understood each descriptor you said, except for possibly the lime, I will have to go search for it.

The lime notes are often drawn out by the use of a bit too many leaves. Lots and lots of leaves gives the forest-like base profile a greener, limey taste. One decided to use the whole sample this session instead of having a very small, but pretty much unusable, amount left over. Though these samples did ship with a very small tea pot that would be suitable for this kind of thing if it were a bit more seasoned.

How will you brew up the last bit of leaves?