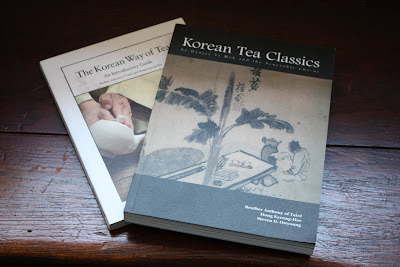 "In monasteries they are accustomed to drinking tea in the manner of Zhaozhou but nobody knows about The Way of Tea. I have copied this so that those who come later can read it."

from Cha Sin Jeon- A Chronicle of the Spirit of Tea, a copy of Zhang Poyuan Chalu recorded by Cho Ui, translated in Korea Tea Classics

Those who do not have a copy of Korean Tea Classics do please follow along and participate by referencing a different English translation available here from The Leaf.

This tea classic will be covered one section a week which will go on for 24 weeks. Feel free to jump in with your commentary at anytime.

I do not understand well why two persons felt sick while copying the text, and were therefore prevented from going on. It does not seem to be a long text to be copied (in 1828).
Is there a metaphor here?

What is the Zhaozhou's manner to drink tea?

I like the last sentence. Very poetic, in a haiku-like way.

Is there a metaphor here?

Firstly, the part about copying the text once, then attempting to "rewrite it tidily", and continuing to attempt to copy it to a neater form even when sick speaks to the reverence shown to the text and the care and attention that should be given to the material contained in its pages.

Secondly, we must remember that Cho Ui wasn't just copying out the text as say we would retype a paper but rather he was employing the art of calligraphy. Although Cho Ui wasn't a professional calligrapher, being a prominent Zen (Kor: Son) monk at the time he would have thought his calligraphy would directly represent his state of enlightenment expressed in the flow of ink and stroke of brush.

What is the Zhaozhou's manner to drink tea?

Zhao Zhou (Ch: Chao Chou) is a Chinese Zen (Ch: Chan) monk that is famous for his koans some of which are included in the Blue Cliff record. See here: http://en.wikipedia.org/wiki/Zhaozhou_Congshen

Yes, thanks, Matt, and to everyone for the companionship, information, and shared thoughts. A living voice from 1828, living internet voices, both marvels.

A cup of tea, dedicated to everyone so far.

I wonder if the original manual script of Cho Ui contained more contents than we see today. When reading about Cho Ui from another source, about him writing ChaSinJeon, it's mentioned that he made a copy of text from a Chinese tea book called "essence of tea classic". But I never figured out what this book is. So I wonder if there were multiple books involved in ChaSinJeon. If so, including the work of copying and comparing versions, it could be quite a job.

I had a good time reading with the book club! What's next? :D

A cup of tea to you and all other who participated both a lot and a little!

This manuscript of ChaSinJeon actually has more contents than the original because Section 22. About the Tea Caddy was not included in the copy that Cho Ui made.

You may be referring to the DongChaSong, the most famous of Korean tea classics and the next text that we will start to cover in a few weeks time?

Thanks for all your thoughts Gingko!

Zhaozhou Congshen Chanshi 趙州從諗禪師 (778-897 A.D.) was a Chinese Zen master of the Tang dynasty. His Buddhist name was Congshen but he was known a Zhaozhou because when he was eighty years old he took up residence at the Guanyin Monastery 觀音院 in Zhao prefecture where he taught until his death at the age of one hundred nineteen. Zhaozhou was celebrated for his use of the gong’an 公案 (Japanese: kōan), the often enigmatic Zen statement or query representing a theme for meditation or philosophical discourse. One of the most famous gong’an was “What is the sound of one hand clapping?” Such a question was impenetrable by the rational mind and understood only by intuition, a process meant to purge the mind of ignorance and delusion.

When Cho-ui wrote, “In the monasteries they are accustomed to drinking tea in the manner of Zhaozhou…” he was referring to a famous story recorded in the Wudeng huiyüan 五燈會元 (Compendium of Five Lamps, 1252 A.D.) in which Zhaozhou and the rector of the Guanyin Monastery received two visiting monks:

Zhaozhou: “Have you been here before?"
First Monk: “Yes.”
Zhaozhou: “Go drink tea."

Zhaozhou: “Have you been here before?”
Second Monk: “No.” Zhaozhou: “Go drink tea.”

Puzzled by what he had just heard, the rector asked why Zhaozhou gave the same response to two completely different answers.

Thanks, as always, for such rich detail. Tried to find an external link to this exchange, but you just laid it out there :)

Something else to note is that many saw Zhaozhou, naturally, as a profound tea master.

Chil bul sa is one of Korea's most prestigious meditation temples- its front sign boasts calligraphy stating "The Number One Meditation Hall In Korea" . Please see here:
http://san-shin.net/Jiri-Chilbulsa-1.html It is somewhat significant considering the commentary below.

Cho Ui states, "That it is not only Confucians that know the saying that "there is a beginning and an end". He says this because he is well aware of Confucian thought- befriending the most influential Confucian thinkers of his time. This comment is a bit of a joke or jab, perhaps poking fun at this phrase which speaks against a strictly Zen view of the world that would posit that things neither have a beginning nor an end. See here:

He is essentially saying that the Way of Tea is based in Dao (the focus of this Classic) and not as much in Zen. He is challenging a commonly held belief that to understand Zen is to deeply understand tea. This was commonly unchallenged because tea likely came to Korea (as it came to Japan) through the migration of Buddhism from China. See here:

Even today in the West when people think tea and religion they think Zen but arguably tea's deepest understanding is with that of Dao. Understanding Tea as Zen can tell you very little about the deeper aspects of production, storage and preparation of tea- that which have just as much to do with the relationship with nature as they do clarity of mind. He essentially is pointing to weaknesses in a purely Zen line of thinking- that if you simply dwell in "No Mind" you literally develop "No mind" or a certain ignorance of the deeper nature of all things.

These comments support Cho Ui's view of Buddhism that stressed the importance of accepting the dichotomy of both concentration and insight meditation (see page 62 of Korean Tea Classics).