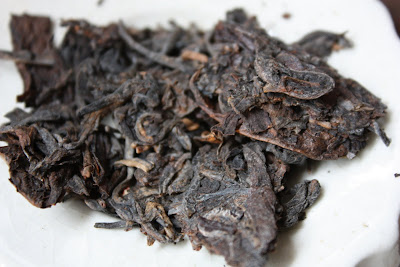 One has been enjoying this sample purchased from Nada of Essence of Tea off and on throughout the winter. Today, on this blossoming spring day, the last of it is poured into a warm pot. But before it is relinquished to yixing the odour of the dry leaf is taken in deeply. It emits a smell of faint talcum and rose and faint fallen leaves. There is almost a lick of coco in the dominant, dusty, dry storage smell which is the most notable tone here. 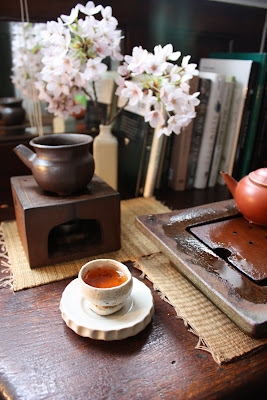 The first infusion presents with rich maple velvet sweetness upfront which fades into dry wood cherry, perhaps maggony. This flavour is thick in the mouth and contains a certain tangy-sweetness which is mainly present in the inital burst of flavour. The whole evolution is vibrant and sweet. The aftertaste is malty that fades into wood notes and suggestions of coco. The mouthfeel is velvety and thick throughout and ends slightly dry and fuzzy especially the back of the tongue and cheeks.

After the first few cups the chaqi is immediately apparent with the forehead getting a bit clammy mild heat waves throughout the body from inwards to out, then back again, from down to up and back again.

The second infusion is prepared and a sweet malty-caramel creamy cherry and slight rose walnut burst flows into mahongany wood. The sweet taste is carried throughout leaving a slight woody menthol like taste on the breath. The mouth is still velvet, slight dry though, and thick as it starts reaching down into ones throat- pushing some saliva into one's mouth minutes later. The face flushes, a sign of the chaqi. The forehead gets soft and clammy, as does the mid-upper back, chest, and even upper arms as the qi flows in a wave undulating over one's body. 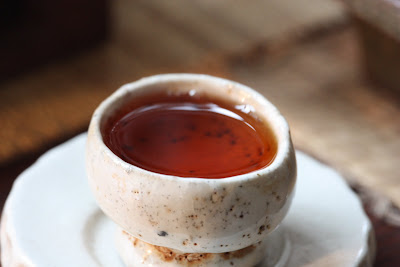 In the third infusion the initial sweetness has lessened and is more of a champhor, malty, more diffuse, sweet taste that works its way into a dry woody flavour. Dry hay and cereal notes are found in this pot but are less apparent than the malty-champhor tastes. The aftertaste is woody and dry with faint, barely there, caco notes floating in the distance. The mouthfeel is slightly dry and gripping and less velvety and smooth initally but gets replenished mintues later as fresh saliva coats the mouth. The warmth of the tea now migrates mainly to the head.

The fourth infusion presents with with some of those velvet malty-sweet wood notes but this infusion has cherry wood, camphor, and earth beetroot tastes. The sweet tastes bridge to wood and a slight menthol aftertaste is left in the breath and on the mouth. In the middle of all this are fruity notes that are not so strong but are noted along with a flash of spice which appears in this infusion as well. The mouthfeel is much of the same, it kind of cools the throat as the saliva retreats then returns again. The warmth makes its way to the lower extremities.

The fifth and sixth infusions share much of these delicious tastes. What is noted in these infusions is a more prominent, relatively fresh, cool camphor evergreen, grassy wood nuance that is sometimes a bit spicy and presents mainly in the aftertaste and returning sweetness. The middle of ones body is the receptor of warmth. It warms the stomach here rising to the upper portions of the body and trickling down to the lower thorax and lower limbs. 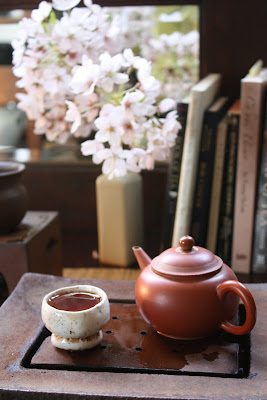 In the seventh and eight infusions the previously mentioned subtle woody spiciness also pops up in the initial tastes. The slight fresh cool everygreen-menthol returning taste is less apparent- in these infusions a coco taste is faintly recognized in the spice.

The ninth and tenth infusions present with a plumy sweet wood initial taste that transitions slowly and gradually into a modest wood flavour. Flashes of these very soft fruit notes peek out then vanish into sweetness. Floral notes are even spotted in this initial sweetness. The aftertaste is sweet and long in the mouth, all of it is under the umbrella of dry wood tastes. The mouthfeel has thinned only slightly.

In the eleventh infusion, the sweet almost creamy start flashes plumb and cherry and even a touch of almost greenish fresh tastes before fading gracefully into wood. The plum comes back with a subtle floral in the breath. The mouthfeel is dry with a returning soft moist feeling. 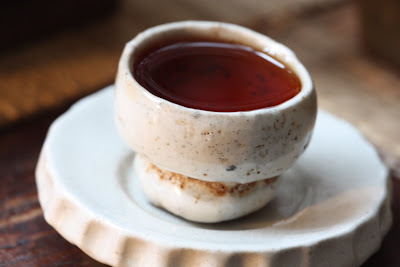 The twelfth infusion still has much to offer with light sweet fruity notes still quite prominent and a mouthfeel that still stims the mouth in much the same way it did at the beginning of the session but now it is much less rich. One runs out before this tea does and so it is put into a series of hours long and overnight steeps to pull all of its aged goodness out.

The tea is taken through four more infusions like this resulting in sweet distinct plum-florals in a cold but oily rich broth. The fifteenth infusion was of note where sweet strawberry notes had the backing of enough mouthfeel to be throughly enjoyed. 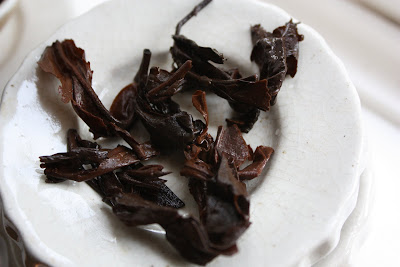 Link to Zero The Hero's (Something Smuggled In) Tasting Notes

I'll believe with you; for a moment.

I had a wonderful time with a brick Xiaguan Sheng 1992, a pure delight that comes close to your descriptions both body and spirit at the level of splendid flavors.

These infusions are so different depending on the dosages, the clay of teapot Zi Sha, Zhu Ni,...
Importance of attention to the preparation of water: I rediscovered each passage this Sheng 1992 with Zhu Ni,porcelaine;or Zi Sha when want rounding the vivacity of youth Sheng with these young leaves.

This cake was nicely stored, the result was its taste, smell, and feel. Only tried this tea in a rather inexpensive, well used, machined yixing. The water was about right though- medium-high mineralization.

... And thanks to you whenever one sees an old granny's face or smells that powder in a crowd, a craving of some ol' Menghai consumes one's every thought!

I recently purchased a beeng of this very tea, from the very same source. OMG, it is so delicious. I have brewed it with too many leaves, as well as with too few. It doesn't matter-- however you brew it you will just be shown another excellent dimension of this excellent tea. Kind of pricey for a 1993 cake, until you consider how exquisite it is, and how much "more aged" it seems than other cakes of a similar vintage. I could also recommend the 1990's "small yellow label" 7532 recipe from the same source. While not quite as good as the 7542, it is a lot less expensive.

Thanks for the recommendation on the small yellow label 7532. Will have to at least try a sample some time in the future.

What you said about this tea rings true- you can steep it long, short, less leaf, more leaf, in the dark, in the day, on the roof, kids at play...

anything- the result will be good tea!

Matt, if you send me your address I will send you a sample of the 1990's "small yellow label" 7532. I just broke up a cake and would love to share this exceptionally good value with other puerh drinkers.

Your kindness is appreciated. Sent an email to your Yahoo account.

Matt,
Very nice to read your impressions of this tea--appreciate you linking to my notes as well. Though I've got a few older cakes in my pu-erh collection, this is probably my most prized pu-erh because it's so complex but also seems like it still has some room to develop with further aging. Hopefully I can make my cakes last, since it's now just too expensive to get more.

Ben, glad to see we share tastes--I just invested in some of that Small Yellow Label too--not nearly the tea this 7542 is, but a well-aged everyday value for an aged pu-erh. I'll be interested to hear what you have to say about that one, Matt.

The noted changes in flavour, sensation in the mouth and throat, and qi movement throughout this session speak to the complexity of this guy. Good luck with not drinking it all up! Hahaha...

Promise to post about the small yellow label sooner than later. Perhaps we will see a post on this 7532 from you as well?

I'll see if I can't work something up about the 7532 soon. The problem with the amount I picked up is that I don't want to break into the bamboo yet, if you know what I mean. I'm planning pretty far out with some of my puerh purchasing lately...maybe I need to pick up a taster amount so I can start posting about it. Hope you enjoy it when it comes your way, just don't expect anything as good as this 7542.

One always tries to go into each tea session with no expectations and let the tea dictate the pace of the session. It'll be the same for this sample as it is for the next. Thanks for the heads up though.

This tea is also one of my favourite. I really appreciate it. As you say, it is more aged than other teas from 1993; it is in the category of "beginning of wisdom" (owing to its taste and feelings given when drinking it).

From Nada, I like its Xiaguan 8653 (about 1986) stocked dry. I find it pure, and with great qi. It is also interesting to compare it with its wet equivalent (clearly inferior).

Its Menghai 7532 orange in orange (1996) is a very nice tea too. I find it warming and recomforting.

I am not found of the other pu er (for instance, Small Yellow Label 7532 is a bit too earthy in taste for me). Anyway, they are usually correct teas to drink (Shui Lan Yin 7542 1998 and Jin Chang Hao Yiwu 2001 might interest you).

(Its old Dong Ding 1981 is also a pleasant wulong to drink.)

Nada owns a great shop. I do appreciate the possibility to order samples.

Thanks for your thoughts and recommendations on Nada's tea. Have not tried the Essence of Tea selection of these teas (but will soon try the Small Yellow Label 7532- thanks again Ben). Yesterday his 1980s Wang Zi was in one's pot, old and simple.

Thanks for your link to Menghai 8582.

I find Wang Zi a bit too flat, without personality. Moreover, there was too much humidity during its storage, which affected its quality.

"old and simple" or "flat, without personality"...
pretty much the same thing.

What was quite nice about the 80s Wang Zi was its strong qi- one's head took a beating from that flat ol' tea!

...a lot of things written about this very interesting degustation and about this tea...so i just wanted to mention this beautiful little cup ... I am really falle in love with it...Who is the potter ? a sping thought from Switzerland...

It's a beauty! See here:

Thanks for lending us your potter's eye.