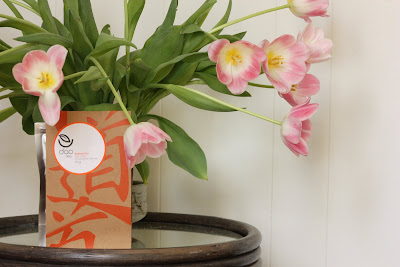 This tea is one of two yellow teas from Pedro at Daotea. Pedro chose to call it by the transliterated Korean name, Balhyocha. Balhyo means 'fermented or oxidized' in Korean. Koreans love fermented stuff, its no wonder that this tea is slowly gaining mild popularity now in Korea. The health benefits of this tea are astounding, and are also helping it become more widely consumed in Korea (although the majority of Korean people have never hear of this type of tea).

This yellow tea was produced by hand- the traditional method, in the oldest tea producing area in Korea- Hwagae. The information on Daotea's site claims that Kim Jong Yeol gave up his business job in the city for tea farming on the mountains. Let's sit down, boil the water, and experience what his hands have created... 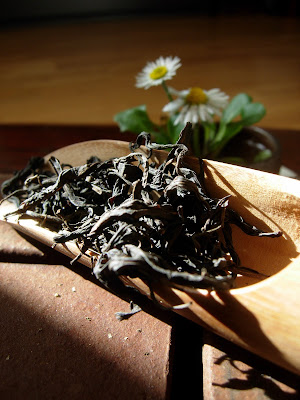 The long wiry dark brown dry leaves have a very subtle blueish tint to them- this is usually a sign of good processing of both Korean green and yellow tea. The dry leaves smell like spicy dried apricots with light buttery and slight milk chocolate tones. Many of these leaves are stuffed into the pot until the overflow out the top. When the boiling water cools slightly, it is transferred into the cooling pot, then into the pot. 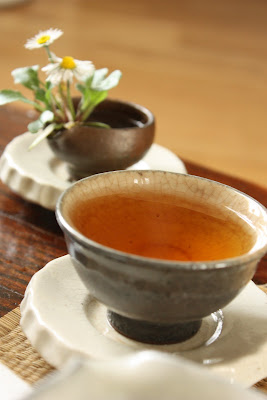 The first infusion pours a bright, clean, light yellow. The taste is as soft and mellow as the color of the liquid- soft vanilla, very light body.

The third infusion, the mouthfeel is light and mossy in nature and fills out more of the mouth. The colour of the liquid becomes more of a brownish yellow. The taste also tries to develop some depth. The predominate taste of vanilla lingers on the breath. 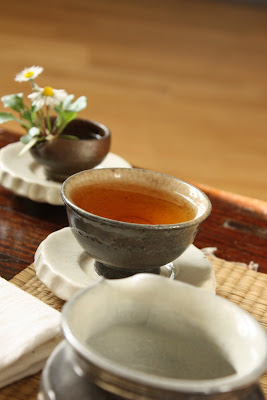 The fifth infusion, the woody flavour starts to dominate. In the sixth and onward there is just sweet, light, woody finish. The qi of this tea is soft and calming especially in the middle jiao. 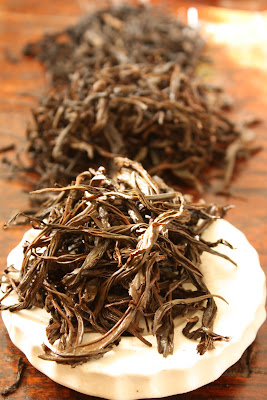 Overall this tea displays a very mellow, soft, and smooth feel, taste, and qi, the whole experience is quite calming. One has tried many Korean yellow teas throughout the years but this yellow is one of the softest and smoothest.

Its medicinal use of calming the stomach and aiding in digestion has been especially helpful the last few days as family is visiting and one has been eating outside the normal diet. The company also really enjoyed this tea commenting also on its smooth and light nature.

I will most definitely have to place an order soon. I have been wanting to expand to tasting quality Korean teas and your blog introduced me to a dealer! Your descriptions leave me speechless. Thank you!

Matt,
I am now drinking some of this tea. I used 2gms with 100ml of water in a gaiwan which is more leaf than the 3g/250ml water suggested. The flavor is good but light. It sounds like you may be using a higher leaf/water ratio given that you said you stuffed the pot. Thoughts?
TokyoB

I have been a long time reader of your blog and I love it!
I have just started a blog of my own and I would be most grateful if you might be willing to put a link on your blog to mine.
Thank you in advance.
Your blog has many a time brought me a great measure of peace.
~Billy

Sorry about the late response, was off the grid for a few days...

Thanks for your kind words. This tea would be a great first Korean tea. It pleases very easily.

One never measures the amount of grams, so can't comment on the exact parameters. But "stuff the pot" means exactly that. One pours enough dry leaf in that it overflows from the top of the pot. Maybe 8 grams of tea stuffed into a small pot?

This balhyocha is especially light so much vigilance should be taken in using as much leaf as possible.

Let us know how it turns out.

Congratulations on your new tea blog! One will surely keep a close eye on your tea posts.

The link section is for blogs that one reads regularly. Hopefully your blog will soon make that list!

Haha, good to hear from you Matt!!
The apple is to prevent sickness ... I am actually not sick right now! *Knocking on wood.*

I will pass on the hello to Chris!

Hope you and Alissa are doing well!