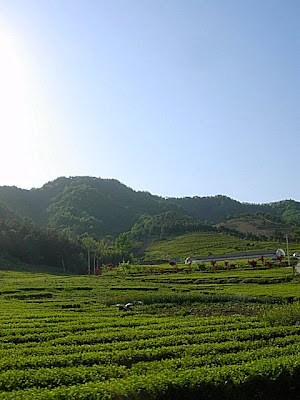 Out of all the tea areas in Korea none conjures up such romance as the tea fields of Boseong, South Jeolla Province. This is partly because a famous T.V. drama was filmed here. But, the romance of these rolling green tea fields transcends all the T.V. commercials, advertisements, movies, and T.V. dramas filmed here. One can get a sense of this when first entering the valley where Boseong's tea grows... 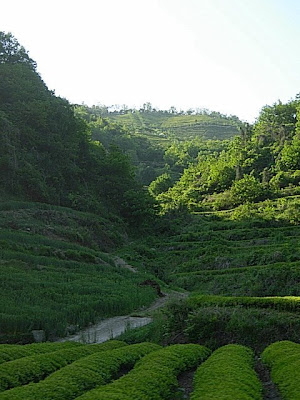 As your car rolls over a hill and firsts descends into Boseong's tea plantations, the scenery takes your breath away. You are thrown into a valley where you are completely surrounded by tea plants all lined up in perfectly manicured little rows. The lines of bushes are so well maintained they almost look artificial. As you weave the winding road descending deep into the shallow of the hilly valley, you get so close to the bushes you can roll down your window and touch them. With tea towering over all sides of you, you can't deny that you are in tea heaven. 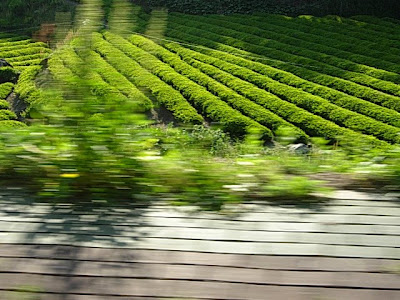 Although tea was probably planted in Boseong for quite some time, it wasn't until 1939, during the Japanese occupation of Korea, that tea was cultivated in Boseong in a similar manner as it is today. It was during this time that the Japanese imperialists planted seeds of an Indian variety on this land. They searched for the best place to grow black tea and, after many experiments around Korea, decided that the environment around Boseong was best suited for their ambitious pursuits.
In 1945, at the conclusion of World War Two, Korea gained its independence. Shortly after, Korea was plunged into the Korean War. The resulting poverty that ensued caused the plantations started by the Japanese to become overgrown as most were abandoned. At this time Korea had survival on there mind, not tea.
As the years passed, Korea became more stable and these tea fields were once again brought back to life, surpassing the glory that once was. 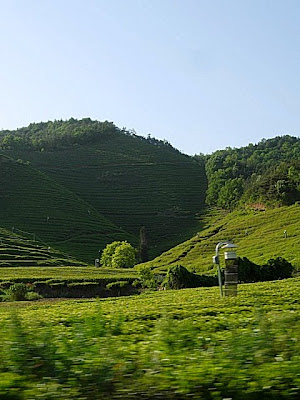 Today Boseong's tea fields are usually bustling with visitors eager to walk between the same rows of tea bushes as their favourite actors once did. Some even come for the Annual Green Tea Marathon, to dine in the green tea fed pork restaurants that line the streets, or to bathe in hot spring green tea baths. Some of the more academic types might even pay a visit to the Boseong Tea Research Center.The busiest time of year is undoubtedly during the Annual Green Tea Festival at the start of May that draws tens of thousands of tea drinkers yearly.
Those who are there for tea should expect quite a typical cup of green though. After the Japanese got the boot, the Korean tea producers went back to their roots and once again started producing quality green teas. The tea is 'typical' because, like most Jeju teas, Boseong teas are produced mechanically, but are usual picked by hand.
Tea sporting the Boseong tea label comes from a type of cooperative where the organic tea produced on many different fields is mixed and sold according to the date it was picked. The result is a fairly good, but quite 'normal' cup of green tea. Along with tea, Boseong also sells green tea cosmetics under its label. 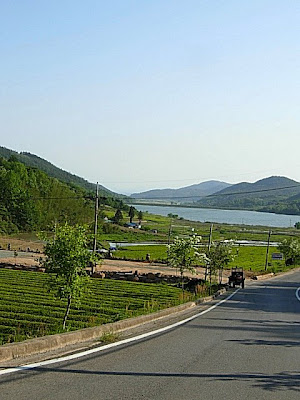 From what one has already wrote, you can probably guess that Boseong is the 'Hollywood' of Korean tea areas.
Peace
Posted by Matt at 8:02 AM

I find it very interesting how big of an effect the Japanese have had on tea in not only Korea, but Taiwan and various other nations as well. Some tea masters have told me that if it weren't for the Japanese tea masters, some varietals may have been destroyed or lost completely.

ah.... fond memories... The best part is, from your last pic. if you follow the road and drive south, you will end up in a fishing village. Abalone with doenjang and with a cup of green Boseong tea, overlooking sunset : ) Thank you for the post Matt, can't wait for the "Jiri shan".

Yes its quite interesting how Korea, situated between the two big tea superpowers of China and Japan, has managed to retain its own individual tea culture. Initially China had the biggest influence on Korean tea culture as tea came to Korea hundreds of years before it made its way to Japan. But, especially in the last few hundred years, Japan's influence has been quite strong. They have not only influenced Korean tea culture but also the tea cultures of other countries that they occupied or fought wars against before being defeated in World War Two.

Hey that memory sounds awfully familiar! But instead of fish one had green tea fed pork... and went for a dip in the green tea hot springs. What a wonderful place to watch the sunset...