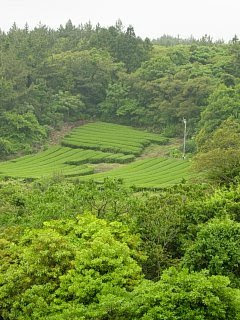 In the next few weeks one will be featuring posts on the three main tea producing areas in Korea. Enjoy.
In 1454 King Sejong of the ruling Joseon Dynasty did an extensive geological survey of all the resources of their kingdom. One record shows a map with tea producing areas marked. This record shows over thirty tea producing areas in total that include Ulsan, Miryang, the current tea producing areas of Handong and Boseong, the city that first produced famous celadon, Gangjin, and even areas as far north as Okgu. This must have been at the height of tea production in Korea. The records don't show the volume of tea produced or wither it was exported or not, but one could image the amount of tea being produced at that time was immense.
Although Jeju Island was not producing tea at the time of the Joseon Dynasty's geological survey, it is unquestionably one of the most famous tea producing areas in Korea today. Even in the mid 1800s there was little if any tea on Jeju island, a semi-tropical island to the south of the Korean peninsula. This fact is often alluded to in a famous exchange by perhaps two of the most famous tea masters in Korean history.
In this famous exchange Kim Jeong-Hui, a famous confucius scholar, literati, and calligrapher makes a plea to his Buddhist friend, and Saint of Tea in Korea, Cho'ui. Kim Jeong-Hui is banished to Jeju island and he cannot find any tea. He claims that he is almost out of tea and can't wait for Cho'ui's next shipment which will be delivered through a visitor who is scheduled to come to the island soon. A desperate Kim Jeong-Hui is growing impatient and suggests that Cho'ui send tea sooner using a different method. Oh, could you imagine being stuck on an island with out tea! 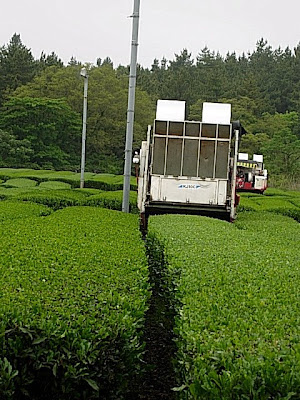 If you visit Jeju these days you will be confronted with an abundance of tea. Tea was likely first planted on Jeju by the Japanese during their occupation of Korea in the early 1900s as they attempted to scout out the best place for a plantation in Korea. Nowadays, the largest tea plantation in Korea, the O'sulloc Tea Plantation and its famous tea cup shaped museum, is found in Jeju. The Japanese proved that the the clean, rolling hills of Jeju are perfect for producing quality good tasting tea year round.
O'sulloc tea, as well as many other Jeju teas, are planted, maintained, picked and produced exclusively by machines the same way tea is produced in Japan. Tea produced in this way sacrifices subtles in taste and quality that only hand picking and producing can create. With all this said, there is wild tea that grows in the mountainous regions of Halla mountain and is produced all by hand, these teas are quite rare and hard to come by. Either way, walking the vast tea fields of Jeju and visiting the first tea museum in Korea is sure to lure even the timid tea drinker.
Peace
Posted by Matt at 7:44 AM

Thanks for your continued interest and support.

Actually One might be headed to India sometime in the next few months. Where exactly is this place? The photos are stunning!