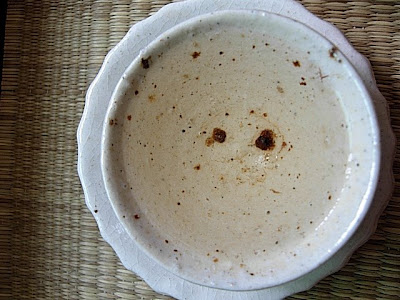 This is a continuation of the post Stretching Tea: A Detailed Sampling of Mystery Puerh, The Initial Tasting. One decided to take this sample as far as it can go by using a brewing technique outlined by Toki on his blog.
The day after brewing eleven infusions from the leaves of this sample. It was time to sample the cold brew that was sitting in the pot for about twenty hours. Perhaps due to the fact that one didn't do so many initial steepings this tea turned out quite red in colour. Its taste a bit bitter with very strong metallic and mushroom still in the aftertaste. The mouthfeel very dry but pleasant and was felt in layers in the mouth.
The hot few second infusion was very yellow like the colour of a young puerh. The flavour was soft and muted, so light with metallic, wood, and very little mushroom. The mouthfeel was faint. The chaqi was calming, relaxing, and balancing.
Then the pot was filled with boiling water and left to infuse until it was revisited the next day.
The tea was brewed in this manner for days. Each day yielded something slightly and sometimes unnoticably different than the day before. As the days went by the taste became more metallic especially in the cold brew, and the mushroomy profile ran out. The hot infusions were always quite a bit softer and less flavourful then the cold. The energy of this tea also considerable weakened until becoming undetectable. The feeling of the tea in the mouth was the most pleasant experience of dragging out this tea. Its complexities in the mouth, toungue, and throat were always welcome.
The tea seemed to peek at around the fourth day. Where the tastes of mushroom, metal, earth, and wood tasted right together and the mouthfeel of smooth, dry, and astringenic was the deepest.
The resulting infusions slowly degraded until on the eighth day the long session was stopped. Really one should have probably pulled the plug on the fifth day. 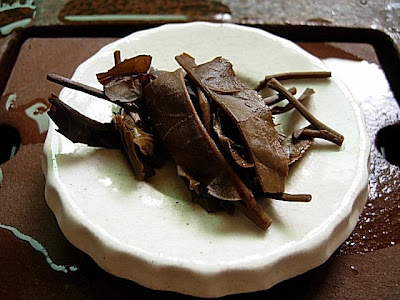 Anyways this longer session was beneficial for many reasons. Firstly, this technique yielded better results than just leaving the leaves in the pot overnight and adding fresh water the next day, the technique one had previously used for brewing tea for up to 3 days. Secondly, it harvested a relationship of patience between the tea and drinker. This patient mind is not only useful when drinking tea but also in the broader context of our lives. Thirdly, brewing tea this way allowed one to savor the cold brew immediately after one awoke in the mornings. While preparing the coals in the brazier and waiting for the kettle lid to shake, the water coming to a boil inside, one could meditatively enjoy the cold brew. Forthly, it allowed for a more celebrated way for the tea to exhaust itself. In Korea many people enjoy their teas until they are completely spent, their sessions push even green teas into the double digits. One feels this is the most appropriate way of exhausting good puerh leaves.
Many thanks Toki for suppling the leaf for this experience.
Peace
Posted by Matt at 6:22 PM

"In Korea many people enjoy their teas until they are completely spent, their sessions push even green teas into the double digits..." I can now tell my wife, her husband is not crazy!! Thanks for making me believe in my-tea-self a little more.

Many tea beginners had questioned about this long brewing method... and many of times I just can't find the right answer for them. All I can advice is, not all tea are equal... and only a handful of tea could be challenge like so. I am so glad you give the patient to find this tea comfortable and calming one's soul.

What a peacefull place is your blog Matt.
I don't taste my tea in the same way since i've read your blog.
Thanks a lot

One is happy you are trusting your intuition when it comes to tea.

Thanks for adding to the peace with such a kind remark. One also enjoys your blog. Getting through the French is a bit of a challenge, but always worth it...

I find it fascinating that Koreans often "push" their teas into double-digit steeping, even the greens. I thought the method has been invented by that genius Toki! Thanks to him for bringing it to our attention and to you for continuing to do so. I've always felt it was terrible to waste leaves which continue to look so full of tea, so to speak. Thanks for your beautiful and inventive blog, I look at it often. Eileen

It just seems proper to use and appreciate all of the leaf, instead of just the most flavorful infusions. One is happy that you also get more out of you leaf. Thanks for stopping by.