Should One Grasp the Stars Or the Sky?: Comparing and Contrasting the Highest Grade Matcha From Yame and Marukyu-Koyamaen 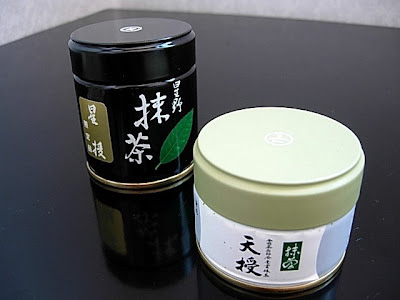 One jumped at the opportunity to purchase these two teas at practically cost and thought to write in detail about them.
The Yame matcha is the black can with the gold label. It is the grade above the green lable that was reviewed a few months back. The name of the gold label translates to “Grasping the Stars”.
The Marukyu-Koyamaen matcha is the green and white can. It is the highest of the ten grades that Marukyu-Koyamaen sells. The name Tenju translates to “Grasping the Sky”.
First one should note that both of these teas are of excellent quality and were cherished and drank with the utmost reverence. Both names suggest obtaining some kind of heavenly enlightenment. One can preemptively assure you they live up to their names.
It must also be noted that the Grasping the Sky matcha is twice the price of the Grasping the Stars matcha. They both cost the same although the Grasping the Stars matcha came in a 40 gram tin and the Grasping the Sky matcha came in a 20 gram tin.
These teas were prepared in both a froth, the traditional Korean way of drinking matcha, referred to as 'thin tea' in Japan. They were also prepared in a watery, non-frothy paste, referred to as 'thick tea' in Japan.

Let's look at these heavenly teas...
The Powder... 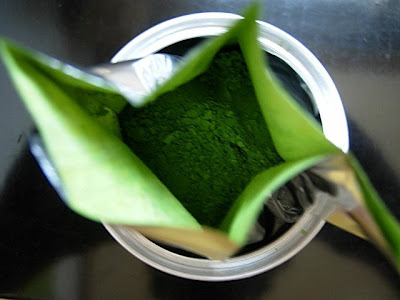 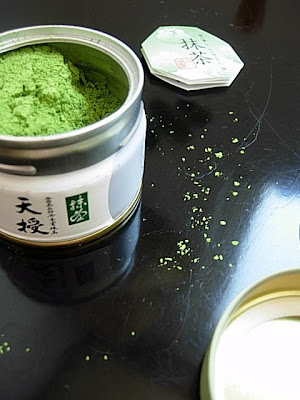 Grasping the Sky's powder contains a thinner, lighter grains and is of a brighter green than Grasping the Stars. It's odour is less sweet, more rich, with a mild smoothness about it.
The Thin Tea's Taste... 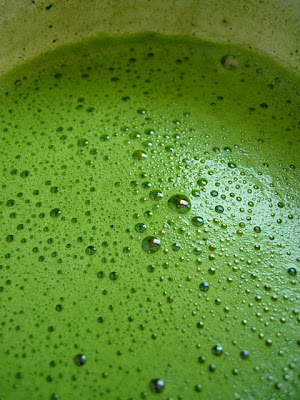 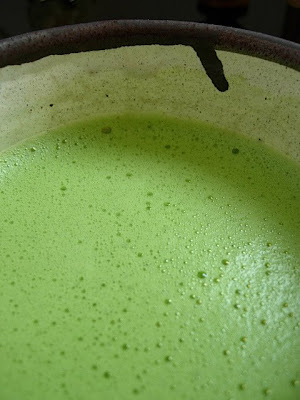 Grasping the Stars thick froth is a pleasure to ones being. Its initial taste is a delicious, cliché but very pure vegital green tea flavour. The flavour is almost overwhelming the taste of subtle citrus which could be detected through the thickness of the froth. A soft sweetness evolves in the mouth seconds later, softening the slight bitterness of the vegital vail.

Grasping the Sky's thick froth is as much a pleasure as the Grasping the Stars matcha. Its initial taste is quite sweet, it becomes richer as the seconds past before sour and bitter tastes emerge minutes after the tea is swallowed.

The Mouthfeel of the Thin Tea...
Grasping the Stars' mouthfeel is thick and a bit chalky. Tis seclusion coats ones whole mouth, throat, and stomach. It leaves one combing the rood of the mouth and insides of the cheeks for minutes afterward.

Grasping the sky feels as though it has a thickness to it but retains a very light airy feeling. It feels lighter and less clumpy than Grasping the Stars matcha. This light feeling is met with a smile.
The Thick Tea's Taste... 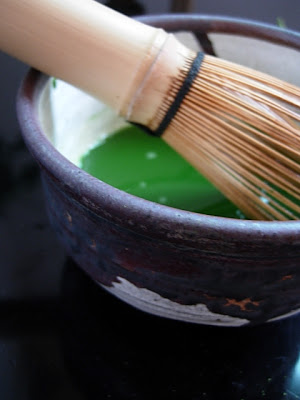 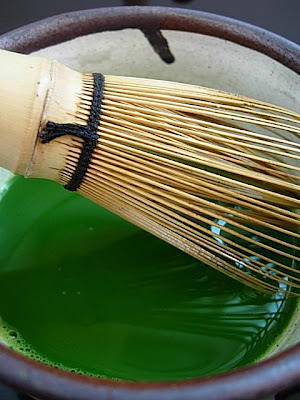 Grasping the Stars tastes of strong vegital taste and is not so sweet. About twenty seconds or so after swallowing the thick green watery paste a bitterness emerges and turns a bit sweet.
Grasping the Sky tastes sweet. There is a bitterness there but the mouth doesn't seem to mind as it only compliments the sweetness of this tea. The green taste emerges a few seconds after the tea touches the stomach. It slides over sweetness, also complimenting it.
The Mouthfeel of the Thick Tea...
Grasping the Stars matcha feels slippery and chalky, much the same way it feels when prepared as thin tea but there is more intensity in the mouth.

Grasping the Sky matcha has a thick, coating smoothness that paints bright green from tongue tip to stomach. It paints thick.
The Chaqi... 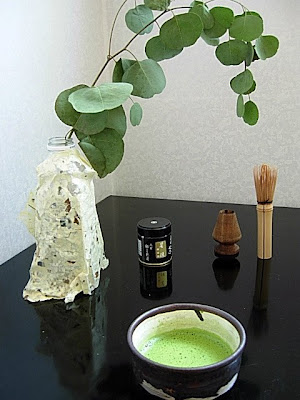 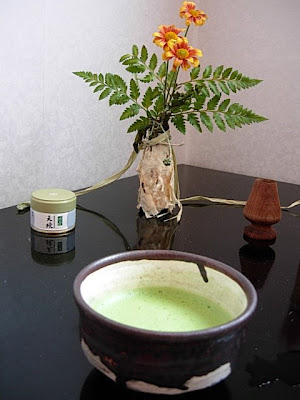 The Grasping the Stars matcha takes one to a place one rarely goes with just tea alone. Its qi is stellar. The theanine must be off the charts. One feels excessively relaxed after consuming this tea. It approaches like the undertow of a wave and pulls you in deeply. After it hits one almost feels tired yet one's mind is sharper than ever. This qi is like no other. It's time to sit in meditation.

The chaqi of Grasping the Sky matcha is quite lively, active, yet soothing. This chaqi is bound to lift your mind and spirit. It is an energy that builds fast but carries no harshness or ill affects.
Overall, both of these matchas are marvolous, if not a bit too luxurious for one's tastes. One will probably not bask in such extravagance for a while. But it goes without saying that the last few weeks have been pretty damn good!

Email ThisBlogThis!Share to TwitterShare to FacebookShare to Pinterest
Labels: matcha

With such splendid teas...I'm happy for you Matt..

Wow, such gorgeous photos! And very nice descriptions of the experience. Thanks for posting.

Thanks again.
If one could get your email address, that would be great Sal.

matcha Tenju is different from another matchas because when you "drink it" the first taste you feel in the throat, a zone that usual not partecipat in the tasting. Than slowly the feeling penetrate all the senses of the body. The aftertaste is very long echo...

Interesting your thoughts about cha qi. I practice matcha every days, but never I mentioned for myself the chaqi in relation of matcha. And this extrafine teas I think are produced for an extravagant new wave modern style of tea drinking. Nor wabi, nor cha qi. Extravagance.

One couldn't agree more about your experience with this tea. The taste does seem to be a delayed reaction and is quite drawn out. Extravagance at its most elegant.

Thanks for your comments about this tea, they are always more than welcome.