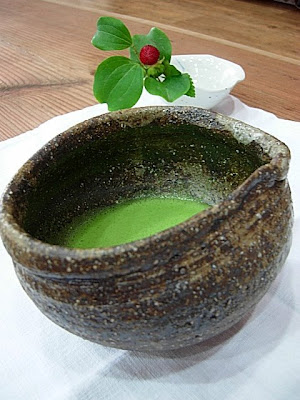 Tea stories have been a curiosity of teaists since teaist have called themselves teaists. This is especially true in the countries of China, Japan, and Korea where tea has a long history and has managed to infiltrate all aspects of life.
Tea comes and goes it allows us to be unattached to the essence of its being as aftertastes fade into nothingness and the radiance of chaqi is returned back to the world through us. However, because tea cannot be properly made without the proper implements and because these utensils maintain their material form until they are smashed into pieces. The implements have been much sought after for monetary or aesthetic reasons. The stories of how they have been stolen, bought, traded, handed down, destroyed, and desired are plenty in the detailed history of Japan, and to a lesser extent in China and Korea.
Below is a modern account of one such story, a retelling as one first heard it...
One day as the famous fashion designer, Louis Vuitton, was flipping through magazines of fashion and art he came across something that took his breath away. It wasn't a dress cut of the latest, hottest style, nor was it a rare Renaissance painting, it was a tea bowl of artist Sel Young Jin.
Louis Vuitton, in awe of what he saw on the pages of an art magazine called to one of his most trusted assistants and asked him to procure this piece for him. He sent his assistance with a blank check to Korea to insure that the bowl he saw in the magazine was as wondrous in person as it looked on the page, and, of course, to seal the deal.
Vuitton's assistant traveled to the gallery of Sel Young Jin. When Vuitton's assistant finally saw the tea bowl he was quite surprised that it looked even better in person. He immediately, took out Mr. Vuitton's blank check and inquired as to how much he should write the check out to. Then Sel Young Jin explained that this tea bowl is his best and that to him it is priceless. And so he explained that no matter how much is offered he cannot accept it. The assistant understood. Sel Young Jin then thanked the assistant for his understanding and high praise of his art as he left empty handed.
Note: The tea bowl pictured above named “Live and Die” by Sel Young Jin and is not the bowl in the story but is such an amazing example of Sel Young Jin's art. More pictures and a review of this bowl next post.
Until then,
Peace.
Posted by Matt at 5:17 PM

That pictured bowl really is something!

Matt, that bowl looks like a hollowed-out rock. It seems that drinking from it would be not unlike drinking straight out of the earth.

I wasn't sure of another way to get in contact with you, but I wanted to let you know that I'm "featuring" your blog at http://multipleinfusions.com. Please contact me if you have any questions.

Only in Korea would they make Louis Vuitton the protagonist of a tea story. I bet that story will be retold with another designer's name when he's out of fashion again. :)

"One day as the famous [insert occupation], Jason Fasi, was flipping through magazines of fashion and art he came across something that took his breath away..."

You couldn't be more right about the bowl and its earthy feel. Checked out www.multipleinfusions.com , nice blog.

Yes, the story was a total name drop, but, nevertheless, an interesting story worth sharing. Love the recent movement on Bearsblog and Phylls' Blog.

“One day the famous blogger, Jason Fasi, was flipping through blogs of fashion, tea, and art he came across something that took his breath away, Phyll's Blog”