A Look at the Different Grades of Pal Yoh Matcha 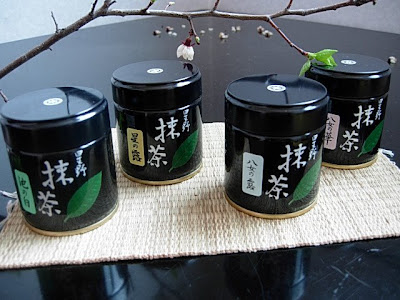 A little background on the matcha.
This matcha comes from the Yame region of the Fukoka Prefecture. This region is located on the Japanese island of Kyushu and is known for its sweet rich gyokuro green tea and matcha. One could go on and on about the history and harmonious environment of this region but Yame Tea has already done such a great job of that.
The Yame region is one of the most famous tea producing areas in Japan, the others are Uji, near Kyoto and Nishi, on Honshu. Pinched in by two rivers and misty mountains, scenic, definitely worth a road trip if you're ever in that area of Japan.
This picturesque backdrop presents the perfect environmental conditions for the production of matcha and gyokuro. The temperature differential, drainage, high precipitation, and pristine environment all contribute to this regions excellent tea. This Japanese research paper goes into detail about the history, cultivation methods, and manufacturing technology of Yame tea... If I could only knew Japanese!
If you are still curious about Yame and aren't tired of linking all over the fucking place try this very detailed tea propaganda video produced by the locals in Yame.
Now that you know a lot more than any one person needs to know about the Yame tea region (or lazily skipped all those linky-link-link-links) lets look at the matcha.
These four cans of matcha are all produced by Pal Yoh (Korean Name) within days of each other. They come from the same tea fields so supposedly differences between these teas will be due solely to the quality of the power(the pics show the colour variance from Green Label, top, to Pink Label, bottom). 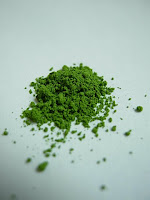 These four grades are divided as follows: 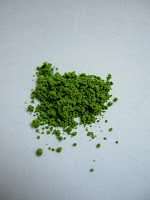 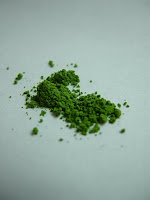 For ease of discussion they will simply be referred to as Green Label, Yellow Label, Blue Label, and Pink Label respectively. 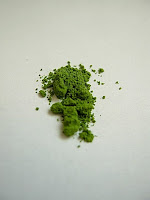 Each matcha was produced with the same water source, utensils, and tea drinking bowl. The amount of water used remained constant, enough for three satisfying gulps of tea as dictated by the powdered tea ceremony. The amount of tea was also held constant, the amount of one bamboo scoop (Kor: chachik, Jap: cha shaku) is shown below. 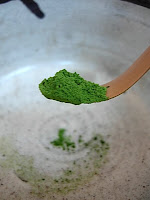 The following teas were prepared and consumed with love and a still mind. 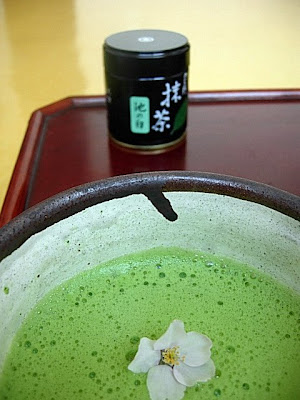 Ji Beck, Green Label
Upon opening this canister, a light plume of thick, rich, sweet odor slithers into my nose, my mind. It is not overpowering, just a pleasant mildness. It almost didn't smell like tea- something more, something else. The colour, bight exuberant green, unnatural for any living thing except high quality matcha.
This matcha displays small bubbles tangled in a thick milky light green froth after whisking.
The thick syrupy sledge slides down the tongue, throat, and into the stomach leaving behind a trail of pleasant mild astringency and sweetness. The most wonderful feeling is left on the tip of ones tongue- a testament to its astringenic sweetness. When it hits the stomach its energy radiates throughout the body- a calming, alertness prevails.
This is what separates a good matcha from the bad, good sweetness/astringency balance, the mouthfeel and qi. The Green Label exquisitely displays all of these qualities.
When three or four chachiks are used the tea thickens even more so. The head of the froth is more pronounced and the taste seems more balanced between astringency and sweetness- with good astringency slightly tipping the scale.
One has to push this tea to five chachiks before bitter elements emerge, once one goes over the line they pay for it. Having ones innards coated in thick bliss is an experience, having ones innards coated in bitter is also an experience, albeit a horrible one. The encompassing bitter follows one around for what seems like hours afterward. 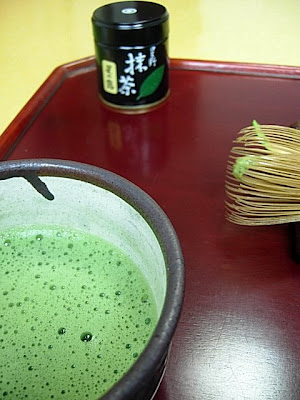 Seng Roh, Yellow Label
The smell of the powder seems sweeter but less rich than the Green Label. Its colour is more vibrant than green in colour compared to the Green Label. Its power, noticeably thinner than the Green Label. Not to be overshadowed, it still shows signs of being a stellar tea- another delight of the senses.
The froth is much less thick than the green label with slightly larger bubbles more noticeable in the head.
With two chachiks of powder used, the taste is more watery, lighter, and less complete than the Green Label. It has less good astringency but about the same level of sweetness. The mouthfeel is lighter and less noticeable. More powder has to be used to fully appreciate the yellow label. When three chachiks are used a chaulky-thick, sweet aftertaste is felt on the tounge where good astringency emerges in moderate thickness. When four chachiks are used, the tea is still less thick and syrupy than the green label but the mouthfeel is full and complete. Sweetness and pleasant astringency hiding all bitterness. This tea is felt less in the throat, barely in the stomach, and more directly on the tongue itself. The qi of this tea radiates outward, similar to that of the green label.
This tea is only slightly less than that of the Green Label- a blessing in and of itself. In some ways one prefers its chalky sweetness and lighter character over the pleasurable suffocation that the Green offers. 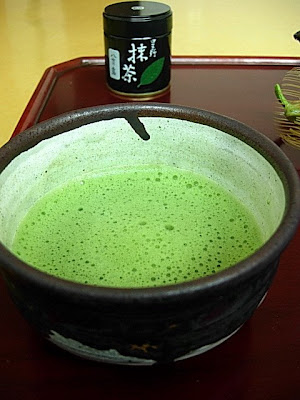 Pal Yoh Roh, Blue Label
The powder ascends as the canister is cracked and slight sweetness mingles with spicy, musty tones that weren't present or perhaps were hidden in the Green and Yellow Labels. The sweetness, much less noticeable. The colour, a much more hazy green, lacking the vibrancy of the Yellow and Green Labels.
As expected, the froth is considerably thinner and more watery. However, unlike the thick teas, the Blue Label exudes a taste and smell that one could find when walking in a damp, dense coniferous forest. Its soup has a watery lightness with much less follow through. It doesn't coat ones mouth like the Green and Yellow Labels. Overall, its quite pleasant by retaining its sweetness. The taste stays with one though mainly on the tip and edges of the tongue and lacks that coating feeling down the throat and into the stomach.
Anything over two chachiks will make one instintually gag. Two chachiks seems just right if one hopes to draw out the optimal flavor. One finds oneself consuming this matcha on a daily basis mainly due to its interesting flavour and light nature suited for consumption anytime. 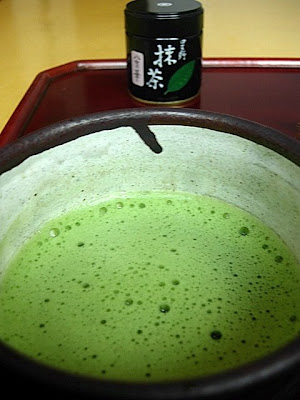 Pal Yoh Hwa, Pink Label
The powder colour of the Pink Label is almost indistinguishable from that of the Blue Label. The difference lies in the smell, as the Pink Label has a fleeting sweet note mostly hidden by sour and pungent odors.
Two chachiks are whisked with a clear mind. The look of the froth is also very similar as is its taste. It exhibits the same forest-like taste. Its taste is simple yet pleasant as the sweetness is much less than that of the Blue Label but its dry/bitter astringency is slightly more.
One of the biggest differences is the mouthfeel. When a gulp is taken, this tea stimulates the front and sides of the tongue and doesn't engulf the mouth. The feeling is like the Blue Label but thinner on the tongue.
Joy can be taken in this teas mere simplicity.
All four labels offer something different, individual, and special in there own right. They are different and they are the same. They are to be consumed in the moment, only compared to themselves, if they are to be truly appreciated.
Due to the preemptive inquisition by Tea Nerd one dug up two internet retailers that sell this matcha. The Yellow Label is for sale at Bassaro and the Blue Label can be obtained though Yame Tea .
Peace
Posted by Matt at 11:10 AM

Email ThisBlogThis!Share to TwitterShare to FacebookShare to Pinterest
Labels: matcha

Great post! Thanks for all the info, the wonderful reviews, and (as always) the lovely photos. All I need now is an excuse to buy more matcha... :)

Yes, unlike puerh one can't just stock up on this stuff.

Drinking matcha means one always has something to look forward to.