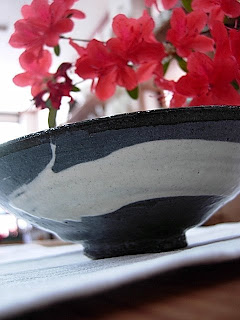 High up the mountains, entrenched in the nature that engulfs it, lies a kiln. This kiln is of the traditional variety, no modern necessities such as gas, or high tech materials are employed. The cackling of burning wood can be heard from the kiln as smoke billows out the earthen chimney. The potter too is one with his kiln, with the nature that he is a part of. The potter, happily and carefree, submits to his work. 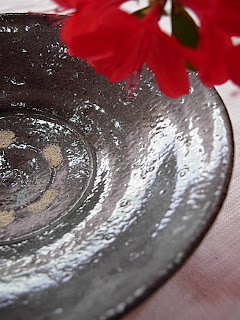 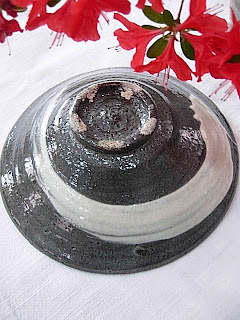 This is the rhythm of the potter as he turns out thousands and thousands of bowls in thoughtless bliss. Unrestrained by thought, beauty, or restriction. Like mantra in action- product is mass produced. The gye yal (Jap: Hakeme, Eng: brushstroke, brushmark, brush slip), is added in this manner without thought, without fuss, just as another step in the process of production. 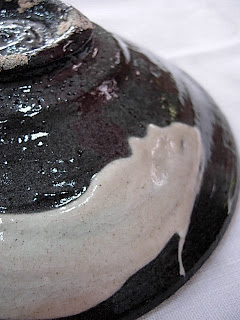 The brush used is made up of whatever can be found or used, there is no fuss as to what the brush is made of, whatever is near will due just fine. The soft tails of straw rice, hair, hemp, grasses, a cloth, or a piece of fabric is gathered by the potter. 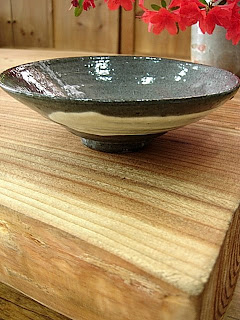 When the turning is finished and the pot green hard, as the throwing wheel slowly creeps to a stop the slip is broadly applied. In an instant, without thought, uncalculated, free like the natural flow of life, the whims of nature, unconsciously mirroring nature, the potter leaves his mark. 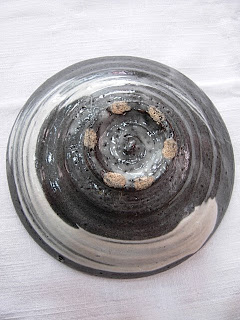 Produced in this manner the brushstroke is Zen.
As one admires it today, they are also liberated. Following the trail of the slip, one transcends ones mind, becoming one mind. Like the brisk stroke of a brush, like the hand of the potter, like his carefree life, like the nature that envelops the kiln- one is free. 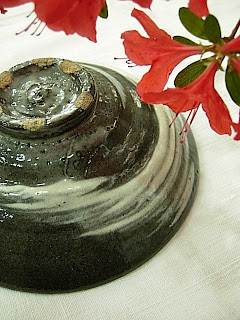 These two tea drinking bowls (top four pics are one bowl, the bottom four are the other) were produced in this manner by Kim Kyoung Soo. They are wonderful examples of a 'one shot' brushstroke, famous in the works of Kim Kyoung Soo. Mimicking the functional method for producing bowls first developed in Korea hundreds of years ago, the Korean potters of today invoke Zen in this same manner. 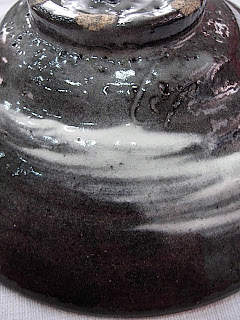 They often produce tens of thousands of tea bowls, only to smash all but a select few into tinny little pieces, returning to the earth what was stripped from it, giving thanks.
Peace
Posted by Matt at 5:43 PM

Wow. Your blog makes me happy.

It is a wonderfull bowl !