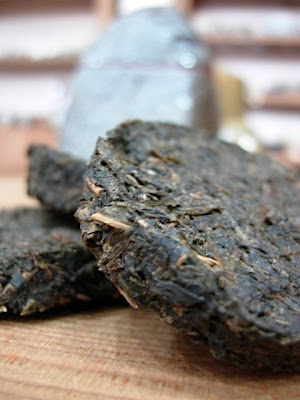 The interest in this rare tea in the bloging community seemed to crest a few months back when a reputable bloger (sorry no link, my memory evades me once more) rallied high praise upon a piece of aged 'Korean Puerh' (that was most likely ddok cha). So the story goes, he had received it from a friend who in turn received it from a monk that had produced it high up in the mountains. This is one of may stories of myth and legend that surround this Korean gem.
And so motivated with the curiosity and encouragement of Toki and you other tea enthusiasts, I went out in search for aged ddok cha. I hit up the seven most popular teahouses and suppliers that occupy the city. This is what I found...
Most tea houses mistakingly thought I was saying 'nok cha' (Korean for green tea) and tried to sell me on the many wonderful varieties that they stocked.
Many retailers flatly denied any knowledge of ddok cha and instead tried to sell me aged Chinese varieties. Claiming that Korea makes green tea, the shopkeepers claimed that if you want the more oxidized tea, you must want Chinese tea.
Other more informative shopkeepers told me that ddok cha is an extremely uncommon traditional tea that is almost exclusively made for personal use. 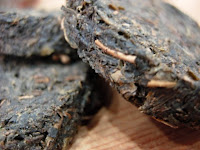 Mr. Kim, the owner of Nok Ya Won whom I purchased the 2007 Hadong ddok cha from, was the most knowledgeable about the subject. In fact, he showed me his first attempt at producing ddok cha. He pulled out five small densely packed cakes of crushed leaves that could each fit in the palm of your hand. They were produced in 2006 and, to my dismay, weren't for sale. Mr. Kim was running an ongoing aging experiment on them. 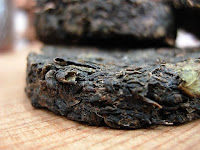 He also told me that a friend of his, a local university professor, has a stash of ddok cha that's ten years old!

And so I went home empty handed, the mystery unsolved. I continue to search to no avail as this mission has only added to the mystique surrounding this tea.
Peace
Posted by Matt at 4:44 PM

Try this place if you can:
http://themandarinstea.blogspot.com/2006/07/korea-green-tea.html

Or call her, the tea master? Hope this help : ) Toki

Thanks for making these efforts to bring us up to speed on Korean teas. I never would have thought ...

I always prefer to do things the old fashion way. When it comes to purchasing tea, I always do it in person. That way I get to make a personal connection with the maker or dealer, I get to hear about the story behind the tea, and I get to try the tea before purchase. I was already in the process of tracking down the people in those links that you posted Toki, so hopefully with in a few weeks...

Thanks so much for your ongoing interest and kind words Salsero and Toki,

You can watch ladies making Ddok-cha at http://www.malltb.com/video/47302604 The fresh tea leaves are first steamed, then pounded to a mush in a pestle before being shaped either into vague shapes by hand or (as in the video) by being pressed into the wooden moulds used to make either some kinds of rice-cake or the little Chagwa dainties taken with tea (Pine-pollen in honey etc). They are then allowed to dry and, if not used soon, to age / oxidize. I never heard of anyone selling this, it is a home-made thing. Yes it's traditional, and the old name (the current name means cake-tea) was something like 'cash-tea' because the lumps had a hole in the middle and were hung on a string to dry or store, looking like old coins.

It is an honour having someone of your expertise in the Way of Korean Tea comment here. Your comments are always more than welcome. In Seoul, this tea is almost non-existent, but in the south, one has come across this type of tea here and there. It is a tea of the common people.

Thanks for the link,