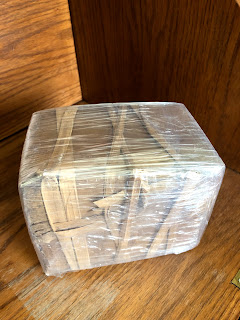 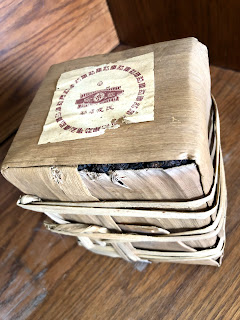 KL Wong of Teapals makes a bold claim about this 2003 Shuangjiang Mengku (Rongshi) Da Xue Shan Wild ($39.15 for 250g or $0.16/g).  He states, “If not better, it’s as good as 2006 Mengku Rongshi Qiao Mu Wang.”  This is the line that hooked me on this tea because personally I feel that the 2006 Mengku Arbour King brick is one of the best productions that Shuangjiang Mengku has ever produced.  This is coming from someone who has also tried a lot of Shuangjiang Mengku.


Ok, let’s go back a bit.  Since, returning for my onslaught of puerh buying, this has been my only purchase that I have been tipped off by a kind email (thanks friend).  He no doubt flagged this wild tea down for me because it has a lot of qualities that I look for in a tea.


First, it’s from one of my favorite factories that is known for cheap and good quality puerh.  Shuangjiang (Rongshi) Mengku is also well known for pressing wild tea and have been doing it for a long time before any of the other factories.  Secondly, I like wild tea though drink it infrequently. The Shuangjiang Mengku Da Xue Shan wilds are some of the most famous factory production wild/ yesheng out there.  This is a very early version of these.  Thirdly, I highly value very tight/ iron compression which these bricks are.  Fourth, as stated above I’m a big fan of the 2006 Shuangjiang Mengku Qiou Mu Wang.


Seems, like this completely Malaysian stored brick has everything I like… so I ended up ordering the last 4 bricks but the big question is…


Is it REALLY better than 2006 Shuangjiang Mengku Arbour King??? 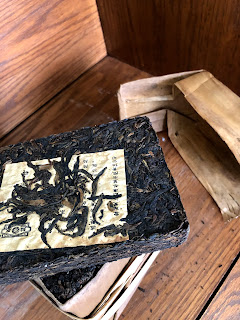 Dry super compressed leaves smell of the dry leaves is of vibrant fruits in wood and slight dirt.


Slightly watery, fruity, distinct date and plum skin onset with cooling light finish on the breath.  The mouthfeel is a bit vacuous in this first infusion with a touch of barely noticeable dryness in the throat.


The second infusion starts off more earth peat mixed with date and overly ripe cherry.  It has a watery and almost tart quality reminiscent of wild tea profile.  There is a slight bready finish with moderate cooling on the breath.  The mouthfeel is sticky especially the lips and this throat mildly opens to the obvious cool menthol.


The third infusion starts with pops of dense and thick syrupy fruity vibrancy, cherry and plum initially then is swept away by a moderate cooling returning yeasty bread sweetness.  There are mild layers of wood underneath.  This infusion excites me.  The qi is starting to kick in the upper neck, down the spine effect is felt as if the head is wobbling on a swivel.


The fourth has a woodier and cherry and rum like taste, a bit like rum and raisin flavor and dried cherries.  The woody taste is not as prolific as the fruity.  There is a wave of cooling and beadlike sweetness and even dark chocolate covered dried cherry aftertaste.  The profile is pretty long and reasonably complex.  It tastes like a drier storage, I wouldn’t have pegged it as typical Malaysian.  There are lots of crispness, woodiness, and fruitiness in here more typical of drier storage.  This is likely due to the iron like compression on the brick. 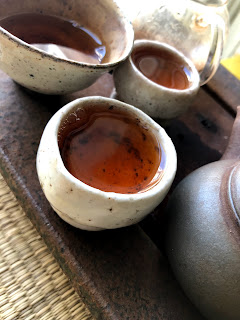 The fifth infusion starts off with a yeasty bread like sweet and sour dominating with sweet fruits layered under that and wood notes even deeper.  There is a mineral taste in this one as well before cooling and converting into a long fruity and bread like sweet taste on the breath.  The mouthfeel is slight tart and astringent enough to give the layers of wild flavors traction.  The qi is powerful in the mind, spacy.  Do I still even have a neck attached to my head, I wonder?  The tart mouthfeel forces the saliva to retreat deeper into the throat.


The sixth infusion starts off strong, dense, thick fruit, wood, cooling,  The taste is real full and strong here. The Qi is real strong in the head too.  I almost feel like I can’t think straight.  I can feel qi pooling in my eyes and spine.  This is a powerful wild tea.


The seventh infusion starts with a pungent fruity bready taste, it’s almost bitter here and more woody with a more pronounced cooling throat action.  The sweeter and fruiter tastes are less.  The eighth infusion is identical with a touch more bready sweetness.


The ninth infusion has more of a sour fruit onset and strong pungent coolness to finish.  There are long bready sweetness and fruits in the breath here.  The Qi is very powerful almost dizzying.


The tenth infusion is a nice balance of dry wood and date/cherry it has a tartness underneath.  The pungent coolness reaches deep into the throat from the astringency here.  I can feel the qi beating in the chest now.  The Qi of this tea is very nice.  I clear out some pieces that have clogged my teapot filter a bit and things change…


The eleventh infusion has an almost floral sweet fruit approach, slight tart, much less bitterness and astringency and a smoothness to it.  It has a talc mineral nuance to it as well.  A subtle mineral soil taste, like licking a rock.  Still distinct coolness and long sweet bready and fruit aftertaste.


The twelfth infusion has that same floral and berry taste now.  It is somewhat refreshing in these infusions, cooling and replenishing feeling but warm in the body and face.  The aftertaste is pungent cool and long fruity breads.  This tea feels very clean and pure in the body.  My mind melts under the Qi’s presence. 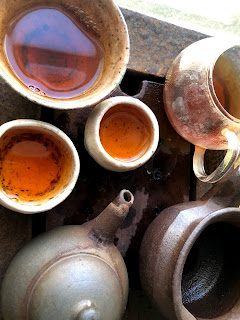 Thirteenth infusion is of mahogany wood with layered fruits underneath.  Deep rich dried cherry, cooling pungent.  My energy explodes in my mind and I break into a sweet.


The fourteenth is beautiful cherry florals with a Saskatoon berry taste.  It tastes like Saskatoon berry pie with the pastry bready edges now.  A sweet fruity mineral aftertaste is enjoyable.


The fifteenth infusion is more berries and wood and mineral.  A pungent fruity long aftertaste.  The sixteenth is still at flash and delivers.  The sixteenth is fruity and long cooling pungent it is simple now but the qi is still strong and the sweet fruit note is predominant.  The seventeenth is sour, fruit, woody base really tastes like younger wild tea here.


The leaves are still very tightly rolled at this point as evidence in the picture.  This is the kind of tea that easily gets steeped for 2 days in my house.  The overnight steepings are surprisingly woody, a touch bitter, and a bit brackish. 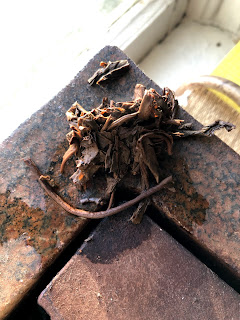 Conclusion: I have had a chance to sit down for a few good sessions with this one.  I have found a lot of variance in session to session with this wild.  This is due mainly to the amount of dry leaves used.  You actually get the best result when the session is leafed a bit on the lighter side.  If you use too much leaf it can get bitter and astringent and turn out more woody and less fruity.


The best sessions, like my first session in the above notes, are close to the brilliance of the 2006 Shuangjiang Mengku Arbour King but really the teas are so different it’s hard to compare.  Other than the same factory and compression, the material and harvest year gives off completely different taste, feel, and energy.  I really like this 2003 wild, a wonderful tea for the modest price tag…


With that being said, I still don’t think it compares to the brilliance of the 2006 Arbour King.

It's interesting tea isn't it!
I like to brew it quite light, then it's not too overwhelming.

Yes it is! I think its one of those cheap enough to be everyday drinker without guilt but complex enough to continue aging into something more.

Hahaha... yes you pick up on that too.

Very nice review Matt. I would be interested to know your overall thoughts about Shuangjiang Mengku, which productions you think stand out and what kind of variations you have experienced with this producer...
Thanks
Marco

I have many many good overall thoughts on Shuangjiang Mengku. Enough to fill a post I'm working on. Hahaha...

When I started to buy puerh again a few years ago I noticed that Shuangjiang Mengku's best productions were terribly underpriced. So I bought up more than a few KG and Tongs of this stuff. There seemed to be a price adjustment over the last year or so but there probably is somewhere on Taobao or the internet somewhere where these productions are still selling insanely low.

As a result most of the stuff I purchased 2 years ago are selling for double, triple, even quadruple the price I paid just 2 years ago. I don't know that I would pay the current asking price now...

I sampled a lot of their mid 2000s stuff back when they were released because of a shop owner in Korea I would frequent.

The Da Due Shan, Mu Shu Cha, and Arbor King from that era is decent but quality changes from year to year. As a general rule, the earlier the production, the better the quality from this era of Shuangjiang Mengku. This is partly because these are blended and the price of maocha was increasing.