Harmonizing Water and Tea: Part 13- More Of My Personal Experience With Water... 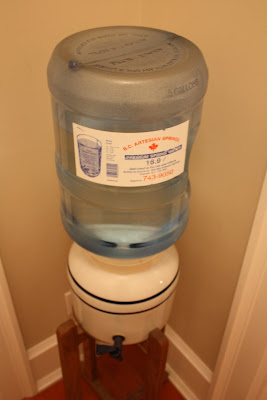 Please see my previous post here before continuing to read...
I am not really a big fan of water additives. I have experimented with bamboo charcoal both in an induction kettle and in a clay tang gwan (kettle) as well as in a water storage container before the water is boiled (see article and comments here for my opinion on these things). I have also experimented with silver beads in a friend's kettle, but still have not played around with salts yet. If you have good water to start with there is little need for such things- if it isn't broken, then don't fix it.
When I arrived on Vancouver Island I was surprised that there are actually not that may local options for local water. With a bit of research I found three local companies- B.C. Artesian Springs Water, Mt Doug Springs, and Salt Spring Water Co.
Mt Doug Springs comes from Mout Douglas within the city limits. It was the closest source of natural water but was very, very light- too light for the tea I drink.
Salt Spring Water Co. is from Salt Spring Island, an island between Vancouver and Vancouver Island. They offer a very light soft round water that would be great for lighter teas such as green teas, matcha, and lighter oolong. They also offer water in glass 18.9 L jugs as opposed to plastic. The problem is that they don't ship off Salt Spring Island. I have considered traveling there to get water in the Spring and early Summer to harmonize their lighter, softer water with the lighter seasonal teas I drink at that time, but Summer came and went and I never made the trip.
The water I have used since coming to Victoria has been B.C. Artesian Springs Water. This water is gathered naturally from an artesian well on the edge of a provincial park outside the city. The qi of this water is both somewhat heavy but vibrant. It was once laying deep in the earth but springs forth in activity as it is violently forced out from its dormancy- nature's emotive force. This is the nature of artesian water.
The side of the 18.9 L blue water jug states the following:
Ca 38.20 Parts Per Million (PPM)
Mg 6.06 PPM
Si 10.90 PPM
Na 8.95 PPM
Mineral Salts 165 PPM
Fluoride 0.12 PPM
This water has moderate mineralization and heaviness and has a full mouthfeel. As a result it harmonizes nicely with most teas and is especially nice for moderate to heavier teas, the majority of the tea I tend to drink most of the year.
The guys at B.C. Artesian Springs Water are very nice and appreciate my enjoyment of their water. They drop off fresh water in blue plastic 18.9 L jugs weekly. They insist it comes from the ground just days before. After using the water for a while I found out that a local tea shop located a short walk away called Special Teas also use the same water to prepare the teas in their shop. 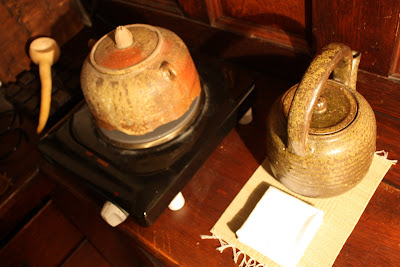 I have a ceramic crock which is used to dispense this water. I considered bringing some ceramic water storage containers back from Korea but they are quite expensive, cost lots to ship due to their large size, and the risk of breakage was too high in my mind. However, I do store water in a Kim Kyoung Soo ceramic ceremonial kettle called a "su ju" (pictured above right). I use this as both a collecting jar and a storage container.
Generally I place the su ju quite low and dispense the water from the ceramic crock so as to induce some activity in the water. Water rests in the lidless su ju overnight near the window where it not only absorbs the essence of the night sky but also is softened by the interaction with the ceramic and the open air. I also store water in my ceramic Kim Jeong Hoon tang gwan (pictured above left) overnight as well. I generally fill it no more than half full so it can reach a relatively quicker boil on the hot plate the next morning. Leaving water in the ceramic tang gwan (kettle) also softens it ever so slightly.
When boiling water is removed from the tang gwan with a pyo choo bak I usually use a medium to high pour from the su ju to replenish the water in the kettle. This is done to oxygenate the water and make it a bit softer and more vibrant which is beneficial for the moderately heavy water I use. Of course, all of these pourings of water will be slightly adjusted as the type of tea that one is brewing will always be considered.
This is how one harmonizes water with tea.
Peace
Posted by Matt at 12:06 AM

Email ThisBlogThis!Share to TwitterShare to FacebookShare to Pinterest
Labels: water