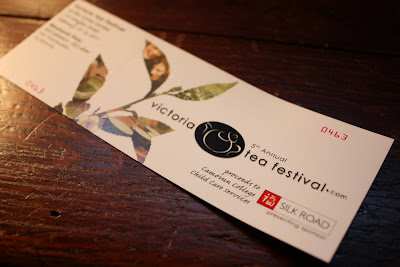 Next weekend is Victoria's Annual Tea Festival held at Crystal Gardens. So far things look similar to last year. The usual quality local suspects will be there selling Japanese tea such as Jared and Miyu from Jagasilk and Peter and Fumi from Chado Tea House. There will also be the very influential tea shops Silk Road and Murchie's taking up large swaths of the main floor. This year a new player entered the scene here in Victoria, Teaopia, bringing with it a large chain style tea shop in the downtown core. They will be here this year sponsoring the presenter stage which is always good for at least a few interesting tea related presentations.

What perhaps will be most interesting about the 2011 tea festival is the last minute exhibitors that don't appear on the program. Last year some of these exhibitors were some of the better places to stop at such as Pedro at Dao Tea, and a few Chinese tea booths that one should have probably spent more time with. There are sure to be some surprises this year as well, like DoMatcha which shocked one with their gimmicky but high quality matcha.

The event is first and foremost a charity event, its primary goal it to raise money for a decent local cause. It must be taken for what it is, not a major tea festival in Asia, not even a tea exclusive festival, but never the less a fine tea festival. It is the tea that brings people together for a common good.

Isn't that what drinking tea is about anyways?