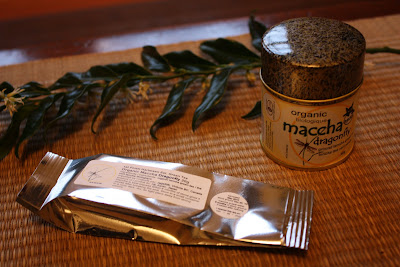 This matcha was purchased at the local stop, Jagasilk. It is the highest organic grade they carry, a step higher then the Organic Butterfly matcha consumed last month. Their webpage claims that Harimaen Estate, the garden they source their tea from, is the oldest and highest quality organic production in Uji. Certainly it is fresh- the label says it was stone ground on Dec 20th. Let's cut open the bag, boil the water, and prepare this tea in ceremony... 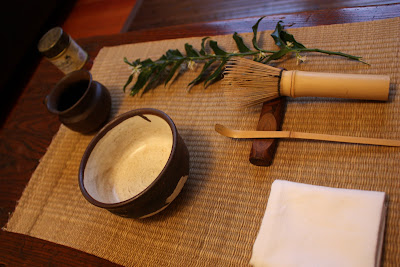 And so the bag is cut open and small particles react with air- one's nose takes in the scent of the powder. There are deep blackberry fruit notes with a savoury sweetness. Nutty notes are also picked up but are faint. The depth of the odour is noted. There are roasted bread smells as well as the scent of sesame seeds. There is a lot going on. 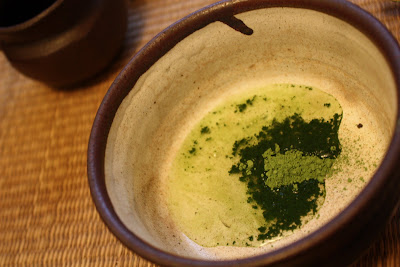 The mind is quieted. Movement upon movement, the tea is whisked up and thanks is given.

Taking the matcha in three sips first reveals an initial sweet burst that is followed by nutty, slightly roasted, sesame tastes which evolve in the mouth. The mouthfeel and throatfeel creep across mouth and throat respectively but with a smooth stickiness and slight grittiness that makes for somewhat of a layered sensation in the mouth. 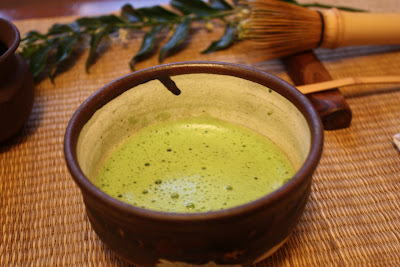 The aftertaste that emerges is a creamy smooth marijuana taste with a somewhat soft 'green' taste. It develops into a malty- yeasty taste that is reminiscent of a good ale. Mellow but alerting qi. 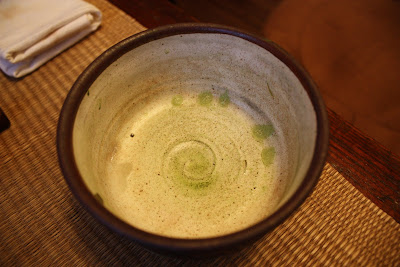 Starts off sweet, finishes sultry. What a evening for a matcha like this.

Email ThisBlogThis!Share to TwitterShare to FacebookShare to Pinterest
Labels: 2010, matcha

Having just started drinking tea, at all, just last year I've been sticking with Chinese greens and puerhs only. But I'm very intrigued by the Japanese matchas and plan to learn more about them this spring. I've got Jagasilk at the top of my mind for the go-to place for good stock around here, and there's an Urasenke group in Seattle I'm hoping to learn more about the art from. Thank you again for a delightful post.

Very nice. I really like your descriptors of the tea. Now I'm craving matcha, with none in the house.

Yeah, matcha is one of those things that any given week you could have none in the house. Although currently have no matcha, your puerh stash on your blog looks sizable. Keep up the good work.

Thanks for stopping by.

Have heard good things about the Urasenke group in Seattle. These organic matchas from Jagasilk fill a niche market with a product that at least meets a certain standard. Most other organic matcha out there should not even be allowed to call its self 'matcha', in fact most of it isn't even made from tencha.

Did you make this as a Koicha or Usucha?