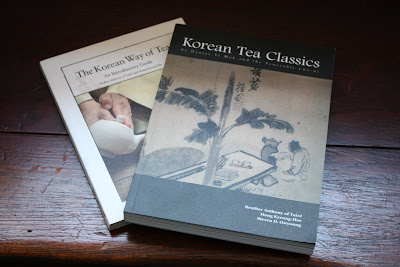 It has been about a month since one first proposed the idea of an online book club for the newly released book "Korean Tea Classics". One had hoped to have published the first post by now. It turns out that we have "lost communication" with Seoul Selection, the publisher who was supplying the two book discount. For the time being we should assume that the promotion they offered is over.

As such there may still be some readers out there who haven't ordered their copy of "Korean Tea Classics" ISBN: 978-89-91913-66-0. It turns out that amazon currently has some copies of this book. Ordering only this book with the free shipping actually is cheaper than ordering from Seoul Selection. Purchasing it with "The Korean Way Of Tea" will only cost a dollar or two more than the Seoul Selection discounted price.

The book club will start with its first post in about 2 weeks. This should give those who haven't ordered the book enough time to receive it.

I had ordered both books from Amazon but they claim "Korean Tea Classics" is out of stock. Yet on the site they say they have one left in stock, I,m confused, either they have it or they don't. No matter, I,ll get this book one way or another so I can play along.

You move markets!
You are the invisible hand.

It'll be nice of you to come and play... If you can track down that popular book!

The book just got released, so that is probably the reason for the sell-outs. The hand that types isn't that invisible (modest opinion).

Hmmm... it looks like the work of the invisible hand!