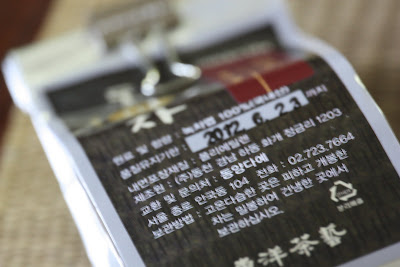 Recently Ho Go, a regular contributor to MattCha's, had commented on the quality of Dong Cheon's tea on MattCha's Blog (see comments here). That same day a package arrived courtesy of Tea Trekker with the three Korean teas they are currently offering. The tea just happened to be ujeon, saejak, and jungjak from Dong Cheon!

Dong Cheon uses older growth, natural tea bushes that grow semi-wild near Ssanggyae Temple in Hwagae Valley, Handong County. They also use the Jeong-cha method of production, a rather uncommon way of producing green tea in Korea. The method involves plunging the freshly picked, supple tea leaves in near boiling water. After which, the leaves are shaped and dried simultaneously in the heated iron cauldron without being removed until they are finished. The result is a tea that carries deeper, more augmented flavours and a heavier body.
Let's sit down, put the water on, and open the package of saejak... 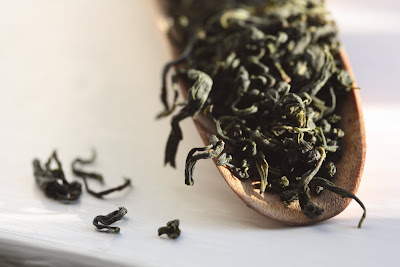 Upon opening the bag, an intoxicating odour of strong, deep, tangy, malted cherry/ berry flavours escape into air. These small curly leaves leave a big impression in a roasted base of pine and cereal odours.

Lots of tea is added to the modest grey pot which is still warm from the preheating. One enjoys the wonderful odour of the dry leaf in the warm pot until the water has cooled considerably.

After it is added, the resulting infusion pours a pale green-yellow. This first infusion is sweet and fresh but deep with oak and raspberry fruit tones. The sensation created from these first sips are slippery and they cover the mouth nicely. There is an aftertaste that is slight but deep- pine and fruit. 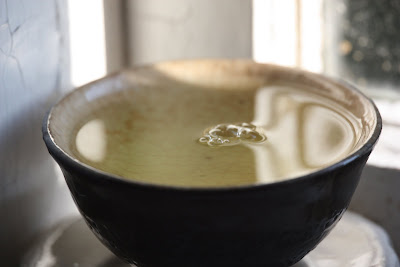 The second pot is prepared, poured, enjoyed. It brings nutty, pine notes that slip around in the mouth. There are fresh earthy notes as well as some distinct oak and berry notes that have been buried under a dominating roasted nutty taste. The aftertaste develops more complexity to it with the strong berry and wood notes lingering on. The mouth feel seems undecisive between dry and slippery. The result is a lively chalky feeling in the mouth.

The third infusion is more earthy and juicy with a finish of pine on the breath. Floral notes develop in a fresh, creamy fruit flavour much like banana. It moves from deep, juicy, and earthy to sweet, fruity, and creamy when a large gulp is taken. The mouthfeel is pasty, stuck in it is deep flavourful after flavours.

The fourth pot carries a more bitter feel, a reaction, and consequence from trying to push as much flavour out of this tea with such a large amount of dry leaf. The flavours become much softer in this fourth steeping. The bitterness gives way to sweeter, creamier, banana like notes but they struggle under bitterness. 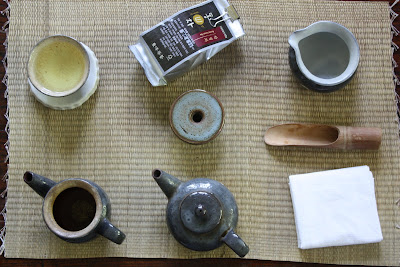 The fifth pot is lighter once more with the flavours muted and smooth floral notes are enjoyed. The mouthfeel is becoming drier but is still of this enjoyable sticky variety.

In the sixth, seventh, and eight infusions the fruitiness wanes a bit, things lighten, bitter edges slowly develop. The aftertaste, creamy and slightly floral, remains relatively strong. This tea is quite palatable even in late infusions if steeping time remains long and temperatures low. 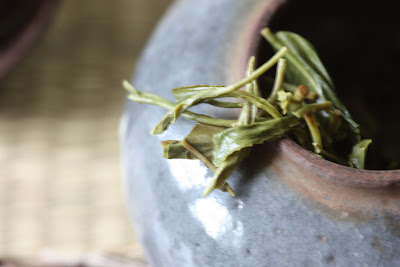 By now the chaqi, which was not so noticeable throughout the session, has snuck up and leaves ones mind swirling.
Link to Bret's (Tea Goober) Tasting Notes

Bob & Mary (Tea Trekker) had given me a heads up concerning the soon to arrive Korean teas. Would you consider these teas to be an exellent example of Korean tea? Ive never had a tea from Korea and want to make sure I get an accurate representation if I,m going to fork out the money. If they are anything like their China green teas, then I,m sure it's sublime.

They taste a bit different than the more typical "excellent Korean tea" because they are produced using a method that is a bit more rare, the jeong-cha method. But the essence of the tea is a very good representative of Hwagae Valley tea.

Do the Korean teas have any similarities to the wild/semi-wild teas that come from Yunnan and the border regions, Laos and Vietnam?

The old growth in Korea are of a different variety than those of Yunnan and bordering region. They also grow quite differently due to the climate of Korea, generally they are not as monstrous as the Yunnan variety. Because Korea is so densely populated with so little forest, there are very very few real wild tea trees- trees in untouched forests. The true wild tea in Korea is extremely rare, and almost impossible to come by.

Generally there are three types of 'wild' tea in Korea.

1- true wild type- as mentioned above.

2- true semi-wild type- is either planted a long time ago by Koreans (most likely monks or local farmers growing for the temples) or during the Japanese occupation and was left to grow over, likely during or shortly following the Korean war but are now closely tended to.

3- somewhat untended from the ancestors of semi-wild trees type- These are tea bushes planted by farmers from seeds (or slips) of the ancient variety. These tea bushes are left to grow somewhat wild with very little or no chemicals or fertilizers. This type of 'semi-wild' tea goes without the care that a plantation would have but not completely left alone in a forest like the true wild type.

Hope this gives you a better idea of the wild tea in Korea.

Matt, you are a lucky guy receiving teas from various sources. I may have to start a blog to save money!

I only tasted the ujeon from this company and it was excellent. I did want to comment that so far, IMO, Southeast Asian green teas have no similarity to Korean green tea that I've come across. I can see a certain thread running through Burma, Thai, & Lao teas, but, they are very different from Korean production. There is much more similarity of Korean to Japanese teas. But, even here, the differences are significant enough in flavor and aroma. Sometimes when I drink a longjing, I can taste a certain flavor that reminds me of a Korean green from Jirisan, a yeastiness, or bready quality, that I particularly enjoy but still a big difference between the two. I do find it harder to brew Korean teas than Chinese, Korean being more delicate and subtle, and, needing cooler water and careful timing. All teas need this but I find it easier to ruin a cup of Korean than longjing. Dring up!

"I may have to start a blog to save money!"

Yes its true that you do receive allot of free samples (as well as full bags of tea) because of having a blog. For instance, this year one will not have to purchase any green tea. One lives a reasonably modest life so samples are always appreciated.

Usually it's give and take though. People want something in return whether its an informed opinion of their tea (i.e. to validate authenticity, region, production method, ect) or publicity for their online store. One likes to think that they give because they know their tea will be throughly enjoyed as well. So its both giving for giving's sake as well as for some benefit. Usually its a case where everyone wins- readers get to find out about the tea, one gets to enjoy the tea, and the senders get the above mentioned benefits. It is always nice to simply receive the gift of tea with nothing attached, but this doesn't happen too often. For this reason, one always tells those who send samples that their tea might not be reviewed on the blog.

Comparatively, received more samples and gifts of tea in Korea, even before the blog existed.

If you started a blog it would really offer an interesting point of view. You likely can offer very valuable insights into the under represented Southeast Asian tea culture as well as your depth of knowledge in Chinese, Korean, and Japanese tea.

You bring up some great points:

One usually resists using the comparing mind as much as possible. But your statements on Korean tea seem quite true, they aren't much like Southeast Asian tea. You say they are more like Japanese tea. These teas from Dong Cheong very much have the feel of steamed & roasted Guricha (Tamaryokucha) from Japan- most Korean tea using jeung-cha production have this feel. Most of the other fine Korean green tea from Jiri moutian, using the Bucheo cha method, is closer to fine longjin.

Your comments about Korean green tea being both more subtle and easy to mess up/ harder to brew is very true.

Thanks for elucidating once more.

When can we look forward to reading HoGoCha's Blog?

Matt said: "When can we look forward to reading HoGoCha's Blog?"I am joining this question. I was happy to met Ho Go in person so I am sure there are insights and experiences to share.

For me is Korea tea like Korea itself- something between China and Japan. It is hard to compare each other, different but with echoes of Chinese and Japanese teas inside. I realized that good Korean tea is closer to Japanese but have stronger leaves like some kind of Chinese (different cultivar, climate, processing) and on other hand really fine so I have to get know it to enjoy its best.

Thank you Matt for your blog (again)
Petr

You make a good point. No doubt the influence of these two neighbours on Korean tea is undeniable.

You could also make the argument (which is the Korean argument) that Korean tea is neither like Japanese tea nor Chinese tea and is a truly unique anomaly in and of itself- worthy of no comparison to teas of other countries.

It always leads you astray...


Thanks for stopping by.

I think you're going to have to wait a very long time for a blog from me. I can't even conceive of doing it to be truthful. I am grumpier than you.

The real question is always 'who is drinking this tea?' Since the answer to this is not located within the conceptual mind, we continue to drink this tea.

That is the only blog I can make! And, that is already too much noise. Drink up.

I included a link to this post on our store site's description of the Dong Cheon Sejak for this year. I would expect this to have only a positive impact - sending more people to read your excellent blog - but of course if you do not want me to include the link I will remove it immediately.

Will be sure to add your company and the Korean Teas you sell to this list later this week:

Wishing you success in your new tea venture!

Thank you. I'm finding that experienced tea drinkers are enthusiastic about trying the Korean teas in our store, and really enjoy them when they do (which is what I would expect).

Yes, there is lots of enthusiasm toward Korean tea over the last few years.

Will be posting on all of the 2011 harvest Dong Cheon teas over the next month or so.