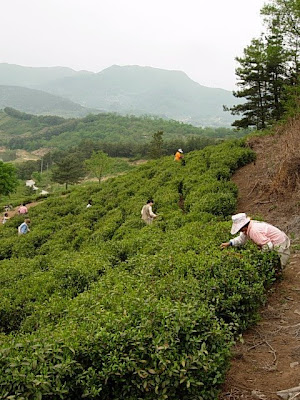 No matter where you go in Korea you will see mountains. You simply can't escape their omnipresent gaze. Out of the thousands of peaks that litter the landscape there are few holier and more, revered than the Jiri Mountains.
The Jiri mountains were deemed important feng shui points at which auspicious Buddist Temples and Pagodas were built. When Chan (Zen) Buddhism migrated from China, it found its home on the secluded slopes of Jiri Mountain. Some of these famous temples are still standing in the same spot they have stood for over a thousand years before.
As long as Zen temples have covered the lush mountain side, so has tea. If you wander the mountain peaks of Jiri Mountain you may just find tea trees that were born from the seeds of ancestors planted over 1200 years ago.
Historical Records of The Three Kingdoms (Samguk Sagi) documents how Kim Daeryum (Dae-Ryeom) smuggled some tea seeds from China. This Korean government official had sewn them into the seam of this garments. A daring attempt, considering the export of China's tea seed was illegal at that time. In 828 A.D., after careful consideration, King Heungdeok of the Shilla Dynasty ordered the tea seeds planted on the Southern slopes of Jiri Mountain.

The tea bushes thrived under the care of the prolific zen monk and teaist, Jingam (774-850) at Ssanggyesa Temple. During Jingam's time, the tea fields around the temple grew and many villages around the Ssanggyesa Temple began planting and producing tea all the way through Hwagae Valley. At that time, and for hundreds of years later, tea became used in all sorts of Religious and Royal ceremonies.

Over the last 500 hundred years, as hard times hit Korea, tea slowly slid into decline. As its use declined, tea plantations were abandoned for other crops, tea slowly continued to spread almost unnoticed, growing wild all over Jiri Mountain.

It wasn't until after the Korean war that tea on Jiri Mountain was "rediscovered". From that time on tea in Korea has experienced a renaissance. Its popularity has gone through the roof in the last few decades. The seeds from the wild plants, are now used to populate much of Handong county with tea plantations.

Most Korean teaists claim that the tea grown here is the only 'true' Korean tea. Most of it is organic and very little, if any, sprays are used. Almost all of the tea made here is done the traditional way, all by hand. Some even produce tea using the completely traditional wood burning method, which takes years of skill and intuition to prefect.

Every year in April and May, Confucian ceremonies are held for 'the Spirit of the Tea' in a spot where three stone monuments mark the area believed to be the place where Kim Daeryum planted seeds back in 828 A.D. Hadong county also hosts an annual Wild Green Tea Festival in May. During these times, these rolling tea hills speak of times long ago. If you listen close enough, you can hear them even in there silence.