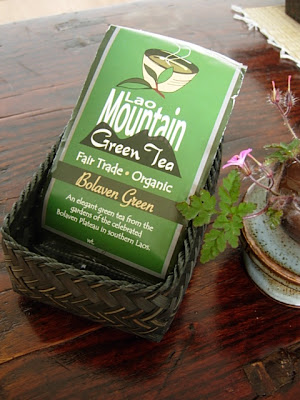 One brought this one back with a few others from Lao. The company that produces this tea, Lao Mountain, pioneered the fair trade, organic movement in Lao and is doing much to give the farmers a fair wage they deserve. Check out their homepage to see all the good they've been doing and a description of their product. Like most tea producers in Lao, Lao Mountain is mainly invested in the coffee trade as tea is more of an after thought in Laos. This is manly because tea people simply haven't really discovered how good it is yet. Either way, this one sure is interesting and exudes the essence and defining flavour profile of teas from this southern region.
The bag of this tea came in a beautifully hand woven box from Kopnoi which truly gave it a Lao feel. The bag is removed from this interesting encasement and is snipped- revealing the wonderful aroma of malty, sweet coffee and hay. Mmmm... 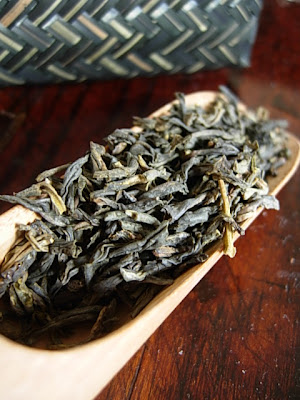 Water is brought to a boil and then is left to cool before embracing these delicious smelling dry leaves.
The first infusion has a distinct coffee smell and taste with some notes of barley and almond. This tea is very tasty. Any 'greenness' in this tea is completely lost to this initial surge in flavour. It's mouthfeel is a touch juicy.
The next infusion delivers bitter-rich roasted coffee and dirt tones with a very light sweetness of sweet fruit. This time the tea leaves a dryness on the lips that seems unable to make it past the very front of the tongue. There is a dryness of natural rubber in not only feel but subtly in taste as well. This tea is dirty, gritty, and rough, something that, along with its flavour makes this tea immediately worthy of liking.
When infused again, roasted notes poke at the idea of becoming smoky before backpedaling. The roasted coffee profile of this tea almost allows for bitter to only act as a compliment. A bitterness that fits. A good bitterness. A black coffee kind of bitterness. By now it is quite apparent that this tea isn't so green but should actually be classified as a semi-oxidized tea as it fails in all areas to fit the 'green tea' profile in both its liquor colour and taste. 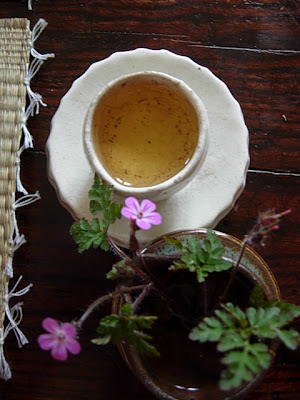 Apparently Lao is at a loss at how to classify tea. Confusingly enough, it seems to refer to all teas as 'green' but then adds descriptors such as 'smoked' and 'golden', and later as you will seen in an upcoming post ' puerh'.
The chaqi of this tea is not so amazing at all but what it lacks in qi it makes up for in flavour. And its flavor holds- this tea has stamina like few others one has ever sampled. In fact you can take this one further than some puerh. Through many infusions this nice, rough dirty, coffee taste hardly budges. It exudes the taste and feel of having a black coffee and smoke first thing in the morning- unrushed and cherished.
Actually, after many, many infusions have passed this tea develops a qi that characterizes some kicky hong cha as it slowly accumulates overtime in the bowels after filling the body with alerting energy.
The chaqi profile, stamina of flavour, and even the look of chopped wet leaves further suggest that this tea went through more than a little oxidization. 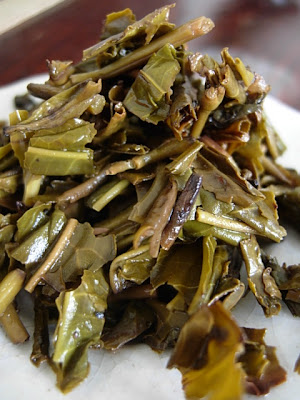 Those who drink tea but love the taste of coffee, this tea is for you.
Peace
Posted by Matt at 4:20 PM

Hi Matt, nice blog. Have you come across a tea company called "Hampstead Tea". Do you have any reviews i could read?

One has never heard of them before but googled their web page.

It seems that they source teas from the super stars of Darjeeling, the Makaibari Estate ( http://www.makaibari.com/ ).

Sounds like they could be solid teas. If you want to make sure the quality is the highest, you should order directly from the Makaibari site though.