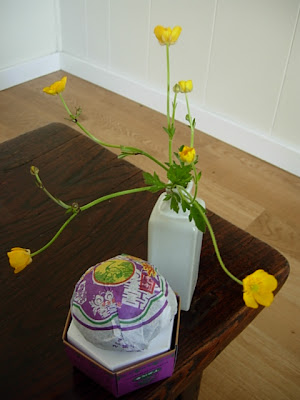 One noticed this one on The Half-Dipper a few weeks back. This was a gift from ol' Hobbes. 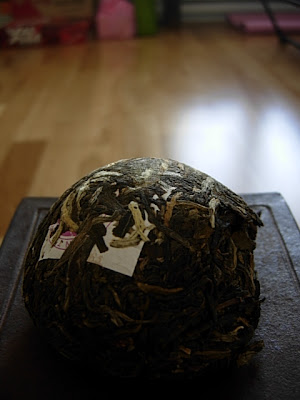 The elaborate and ornate packaging sets the stage. Removing it from the box and wrapper reveals a healthy mix of dry leaves that smell of creamy sweet, papery tobacco. Just a touch of mushroom is detected as one inhales deeply.

This tea is prepared in the same way one prepares all puerh, the ritual is as much of a treat as the tea.

The first infusion imparts a gentle follow through with light, waify creamy cinnamon-like spice in a nice sweet finish of tobacco. The qi of this young tea is very welcoming right from the get go. 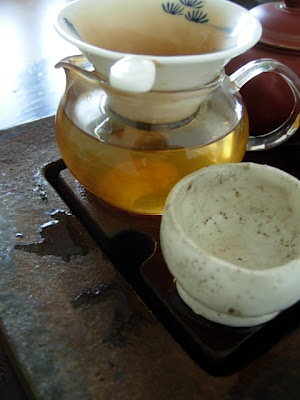 As the go gets, the tea gets going. The honest, pale, slightly orangey-yellow liquid has flavour and energy abound for such a little tuo. Its simple flavour is a good one. Its feel in the mouth is timidly gathered in the middle of the tongue and snatches at ones saliva playfully.

After not too long, the flavour starts to develop an underlying grainy-cereal profile which evolves as the session plays out. 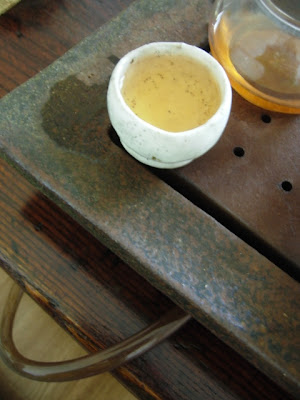 This tea's initial flavour retreats faster than one would like, hiding under the blanket of wholesome grains which stretch all the way into the nose. Infusion times require sharp adjustments if you hope to recapture the fleeting flavour of sweet, creamy tobacco and spice. If you run after it long enough, you can still catch it, if not for just a moment. Certainly, longer infusions don't much increase the bitterness of this tea, so it's worth a shot.

In later infusions ones mind drifts to images of golden wheat fields blowing in the wind, creating undulating waves of gold in a sea of grains. This tea captures this relaxing feeling. 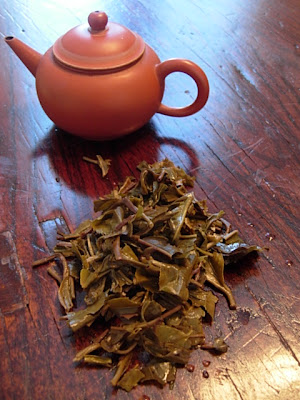 Good eye. That's the first time this beauty by master potter Sel Young Jin has been pictured on this blog.