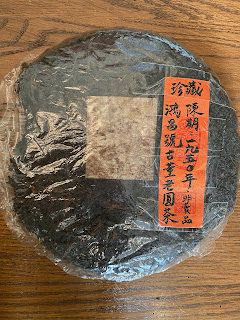 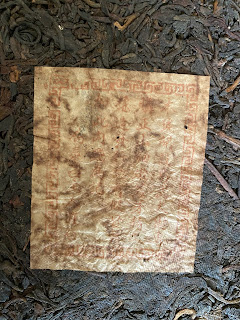 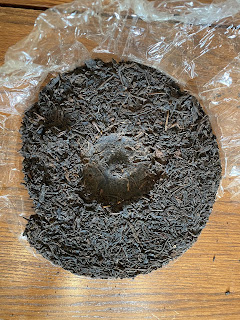 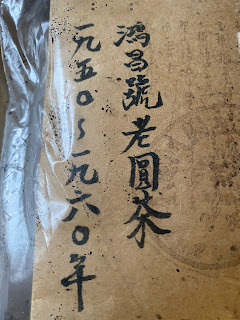 This cake is one of my last remaining cakes from the 90s/80s/70s.  I had mentioned before that I had some number of these in the past but I mostly drank through them all many years ago… because they are delicious.The only cakes that survived were ones with some sentimental value.  Some older shu puerh managed to escape my insatiable hunger for aged puerh simply because I drink so little shu.  This cake survived because it was given as a wedding gift and had this type of sentimentality attached to it.

Back in the day you could receive something significantly aged like this or even a Laobanzhang as a wedding gift… nowadays the closest we get is a tong of 2013 Xiaguan Love Forever… hahahhaha… still pretty good.  This is what I know of this cake…  I believe it was purchased by a Korean shop keeper who went on a puerh buying trip to Taiwan in the early to mid 2000s.  It was stored briefly in Korea then I stored it in BC where I sampled it once or twice.  I recently opened it again in Good’ol dry to the bone Saskatchewan where I currently reside.  It is the same cake that Marco recently blind sampled here.

Here are my tasting notes on this aged beauty…

First infusion has a sweet candy plum taste that indicates some drier storage at the end with a subtle oily texture with a rich aged almost nutty taste to it that suggests some Traditional Hong Kong storage early in its storage history.  There is a bit of fallen leaf mulch taste in the mid profile a bit of cooling then a sweet candy finish.  Nice relaxing feel off the bat.

The second infusion has a sweet dry cherry taste with some subtle richer medicinal menthol woody taste initially there is a nice mild oily texture in the mouth especially in the front and a bit of sticky dry lips and slight drier throat simulation.  Nice deeply relaxing Qi so far but also a bit powerful in the chest.  A bit of body feeling in the wrists and hands and a subtle tingle in the face.  A cooling throat throws some returning plum cherry sweetness.

The third infusion has a coco smoothness an emerging camphor woody medicinal leaf mulch taste.  It has a bit of a creamy sweet woody finish.  The feeling is a bit chalky oily in the front of the tongue but also drying on the lips and back of the throat simulating it slightly.  Nice deeply penetrating Qi with some chest expanding and arms tingling.  There is a subtle bitter astringency that lingers minutes later.  The Qi has a lingering and deep power to it common with puerh from the 70-80s. 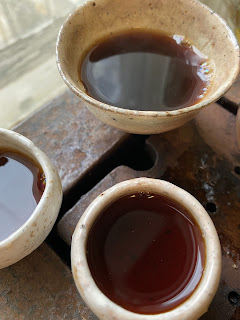 The fourth infusion has a deeper richer nutty sweet oily mulch taste with the sweetness being mainly the nutty taste with only a little sweetness trying to punch through the camphor cooling finish on the breath.  The mouthfeeling is simultaneously oily and dry which is an interesting dynamic feeling.  The Qi is also both deeply relaxing and deeply energizing a nice aged Qi feeling common of things a bit older.  There is a woody not quite coco but almost oily nuttiness left in the mouth.  The bitter and astringency is faintly appearing after the fact in the aftertaste minutes later.

The 5th has a sweet oily nutty woody left onset with a camphor mid-profile and a faint chalky candy over a woody drying base.  The sweetness is faint and comes out with more bitter astringency on the breath.  Deep chesty Qi feeling with deep relaxing and rejuvenation.

The 6th has a medicinal rich almost but not really nutty sweet and oily deep taste.  There is some oily texture in the onset and some dryness in the finish.  Overall, not much sweet.  Nice deep relaxing now.  Some faint bitter astringency minutes later with a chalky nutty woody leaf mulch finish.

The 7th has a medicinal onset with a woody old books taste with sharper woody bitter astringency and not that much nutty sweetness.  A lingering mouth coolness with a camphor.

I push harder with a 20 second added to flash steepings…

8th has a woody old woody taste with some sweetness woody underneath that is hard to access.  More of a woody varnish leaf mulch taste here.  There is some coolness on the breath woody finish.

9th infusion has 30 seconds beyond flash and is left to cool and gives off a rich nutty taste that moves toward a camphor.  There is a woody finish.  There is a distinct chestiness to this puerh nice relaxing and reassuring energy also deeply energizing.

11th is left for a good 10 minutes… deep rich nutty woody onset that turns into a cooling camphor in the throat.  Nice woody overlay.  Warming Qi with a chesty feeling and deep energetic relaxing.

12th I do a quicker 5 min steeping… it gives off lighter woody varnish type tastes with not much other taste in there some faint cool camphor but that’s about it.  This old stuff usually has to be pushed pretty hard… 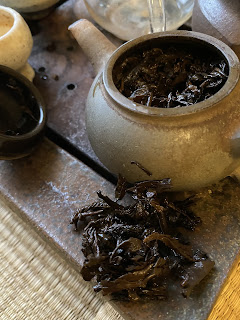 Is there anyone who can give me more info on this oldie? I would really appreciate it!

Marco says its not Puerh, its Liubao.

You dont seem to agree?

Although theoretically possible that it is old Liubao, Liubao this age was pressed in a basket not in a cake form. The form of this cake and very old taste and leaf and feel suggest 80s or older Sheng puerh to me.

The feeling is mutual…. Hahaha

It’s special… not as special as the old lady tho’

My memory bank only has experience with 70s puerh, nothing older. So I suppose I default to this…

hi Matt! I have seen this cake a few times before, it looks to me like a 1980s hongtaichang tea, made in thailand and done with a kind of partial fermentation, so that it is somewhere in between ripe, hk trad, and raw… the unusual profile, rich nuttiness and minerality and lack of sweetness makes it resemble liubao to me. it was good and thanks again for letting me try!

This definitely makes the most sense to me. There is definitely a blend of shu and Sheng both in the pics of the dry leaves and in the flavour which presents as almost two different teas simultaneously. You can especially see this in my notes above at steeping 3 & 4. Where I note a simultaneous but very different distinct mouthfeeling and Qi. This is typical of blends of shu and Sheng but sometimes the storage and aging really blends a cake into a cohesive whole. Interestingly, the blend is quite apparent still!

I find it also interesting that Shah8 often describes old hongtaichang as Liubao as well:

The tasting notes I have read online regarding 80s hongtaichang sound similar with a distinct nut taste and old furniture varnish tastes. However, my cake diverges from the tasting notes when it comes to sweetness and seems to have much less of this compared to the other notes I’ve read. Sometimes older cakes I’ve tried from the 70s have very little sweetness. On the other hand there is still not a cohesive blend of tastes, Qi and mouthfeeling, along with the still strong bitter astringency makes me think that it might even be a 90s production…

Check out this post by John which strangely mentions 2013 Xiaguan Love Forever as well… weird coincidence:

It looks similar to this, but storage must have been quite wet:

um.... curious about the Tea Master's comment above: what makes you think this cake is from 1960s?

Hahaha… yeah I saw that you got an old Hong Tai Chang there too!

All of a sudden lots of Western puerh vendors selling Hong Tai Chang when just a few years ago there were no vendors selling this factory. Lots of the older CNNP/ Menghai stuff westerns are being simply priced out of the market these days.

It’s mainly just wishful thinking to think this is older than 1970s. My understanding and experience of production techniques and taste and feel of the tea seem to put it at 70s or 80s or even a long shot at earlier 90s. You’ve tried it, you have some idea.

Need to get a better feel of 1960s puerh and should sample more from here…. Hahaha… not happening.

Sampling Teaside’s older stuff would probably give me a better idea.