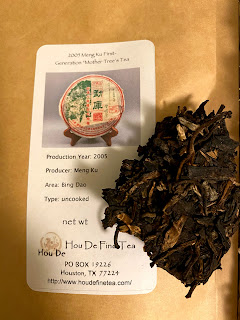 I remember actually trying this one fresh off the press in 2006 or 2007.  At that time it was very bitter astringent yet quite fruity, perfume, floral and vegetal- very Qi laden.  It was a pretty good Mu Shu Cha puerh and likely the first Mu Shu Cha I have ever tried and I considered purchasing some back then but never did.  It was obvious to me even back then that this is good tea but I couldn’t bring myself to buy it because of the unusual profile that I had never really encountered before.  I have said before here on ths blog that Mu Shu Cha is really a sort of different thing than puerh that shouldbe evaluated on its own merits, sort of like yesheng.  I don’t really believe these tastes too much like puerh and actually more resemble Yesheng.  I ended up trying some other Mu Shu Cha productions (including other Shuangjiang Mengku) throughout the years but this one, I think, is a very good benchmark Mu Shu Cha.

I have kind of been following this tea for quite some time, watching it slowly increase in price over the years.  I debated purchase again a few years ago I remember seeing this one at King Tea Mall for a few hundred dollars.  I’m not sure of the storage but I think it might have been Guangdong stored?  It was on my long list of tea to purchase again but I now couldn’t justify the price especially when there were other Shuangjiang Mengku that I liked better that were cheaper.  I had also just purchased loads of Shuangjiang Mengku and figured I had enough.  I was surprised to see this 100% Houde Huston stored version available for $425.00 for 500g cake ($0.85/g) pop up this year.  In 2017 it was selling at Houde for $70.00 for 500g cake but this was before the 2018 price correction .

Guang wrote a blog post on this one hyping it as a first generation cake which is a collector’s item and also it being Bing Dao.  Often early Shuangjiang Mengku cakes are hyped as “Bingdao” or “containing Bingdao” however this is only speculative at best.  This marketing is often applied to all early Shuangjiang Mengku from this era inappropriately.  I agree that you are paying for the first generation collector premium on this one but having tried other Shuangjiang Mu Shu Cha this one is also considered the one of the best of them although I only tired the 2005 and 2006 I believe.

This sample was really the motivation to pay the heavy shipping and try some of these Houde samples after all these years.  I’m really excited to try this one that I sort of still remember from 15 years ago…

First infusion has a watery onset with a creamy sweet expanding finish.  There is a candy like full expanding taste over a creamy cottony mouthfeeling on the tongue.  Subtle bitter vegetal that can barely be accessed here and has a bit of coco taste.

The second infusion has a strong mouth astringency first which is balanced nicely with creamy sweet candy like strawberry tastes and woody under nuances.  The throat kind of feels vacuous but deep and a nice strawberry aftertaste with faint pungency and a woody coco mild bitter finish.  The Qi has a strong mind-slowing and ultra focusing feeling.  I start to hear things far away my senses and honed.

The third infusion has an astringent and sweet candy like onset.  The astringency amplifies the sweet candy strawberry tastes and the taste expands over the tight pucker tongue.  The finish is first bitter wood coco then an almost cool pungency and strawberry candy sweetness.  The Qi is warming in the body and focusing.  The throat feels vacuous but deep.  The tongue transforms into a cottony feeling where tastes still seem to linger. 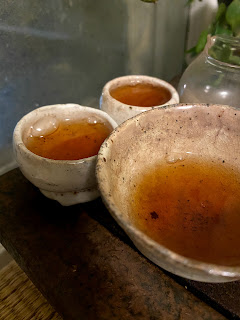 The fourth infusion has a stronger bitter pucker with some sour taste building and less sweetness here.  There is a creamy sweet strawberry taste under the more intense full bitter astringency.  This infusion has a dominating coco woody bitter astringency.  The Qi is a powerful warming, smooth in the body, and very focusing on the mind Qi.  Very very nice Mu Shu Cha typical Qi.

The fifth infusion has a creamy sweet with bitter coco onset over a slightly puckering mouthfeeling.  There is an almost unrecognizable faint coolness in the throat with candy strawberry finish.  The cooled down cup is bitter sweet coco.  Nice strong warming harmonious in the body and focusing strength in the mind Qi.  The Qi is typically good Mu Shu Cha.

The sixth infusion has a bitter sweet coco astringency to it.  There is a rolling creamy coco sweetness with a sweet fruitiness that attempts to push through the bitter profile.  The mouthfeeling is still a puckering but turns more into a flat coat on the tongue rather than the cottony fullness on the early infusions.  Big Qi.

The seventh has cooled down in the cup and gives off a bitter sweet caramel coco taste with still some flat pucker on the tongue and a faint open deep throat.  There is a pungent almost minty taste that is common with Mu Shu Cha in there as well.

The eighth has more of that minty vegetal taste its almost a flat bland taste that is common with Mu Shu Cha.  This profile is mixed into the milder bitter-astringent coco and less sweet creamy.  The mouthfeeling becomes stickier now.  Big Qi Mu Shu Cha continues.

9th is more watery with coco bitter sweet and bland vegetal with a puckering but never dry tongue coating.  There is a minty vegetal almost floral taste.  There is also fruity taste.  The mouthfeeling is more puckering almost dry.  It even is felt in the upper throat.  The sensation leaves less aftertaste but what is there is an interesting cinnamon taste.

The 10th is more watery now and less bitter but more vegetal bland now.  The Mu Shu Cha bland vegetal taste allows for some simple faint strawberry to bleed through.  The mouthfeeling is less strong and the bitterness is almost gone with more of a astringent pucker on the lips.  The Qi is losing strength too.

The 11th infusion is watery bland vegetal.  With not much sweetness left, a faint bitter-astringency.  Not much flavours.

I go at it again at a 40 minute steeping… it is a stronger almost syrupy vegetal sweet slight bitter astringency.  It feels like a slight pucker in the mouth.  The Qi has dropped off and is mainly relaxing now.

I put the leaves into a mug and grandpa it out… 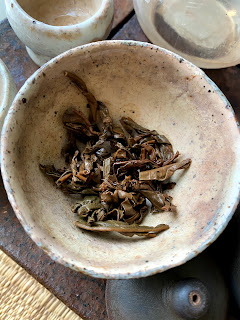 Overall, this is a nice early, example of Mu Shu Cha that has optimal storage for such a thing.  I’m not sure if I would spend that kind of money on this kind of thing now- remember that 4 years ago this exact cake was selling for 70$!  Really you are paying the premium for both good storage and due to it being a collector puerh.  Not for the relative experience.  To me this tastes less like Bing Dao and has much more in common with other Mu Shu Cha.  With that being said, if I blind purchased this one I would likely be satisfied enough with it.  For me it was most interesting to see how this one bitter astringent and vegetal sweet young puerh has transformed into something that still really retains its original essence but is now ready to drink and enjoy despite its stronger qualities.  I really enjoyed this.

This may be the best mushucha I’ve tried but the 2011 by YS is almost as good and half the price. The 2014 is less yet and has better qi and in a few years will be better than either of the above.

I read your notes on this one following the steepster link. I figured you would like it :)

I have only tried the 2015 Yuannan Sourcing MuShuCha so I can’t really say but I doubt the 2011 and 2014 have the intensity of this Shuangjiang Mengku.

I would only guess that these earlier Shuangjiang Mengku MuShuCha are more bitter and astringent in a factory sense and that the Yunnan Souring versions are a more deeply Gushu experience.

Yeah your point rather sums it up, however the 2011 after 6 months of heated storage is closer than one would expect. The 14 is definitely a more gushu experience