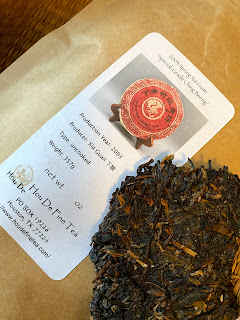 First infusion has a straw grassy metallic onset with a smoky almost gamey BBQ meat finish. There is a slight soapiness to the taste. It is not really sweet but more of a stronger savory presentation over a flat slight fine sandy mouthfeeling. The second infusion has a hay and straw/dried grassy onset with a metallic BBQ gamey meat slight nuance in there. There is a very faint coolness in the throat and mouth with a nice thin but full chalky sandy feeling.

The third infusion has a full almost sweet cherry taste that is under grassy and straw and metallic tastes. With a more woody BBQ smoke faint finish. The smoke is moderate-mild but intertwines nicely with the more classic Xiaguan like profile. The taste present full with a faint touch of bitterness. The full initial taste holds into the aftertaste. There is a nice smooth alerting Qi in here with some Heart racing. 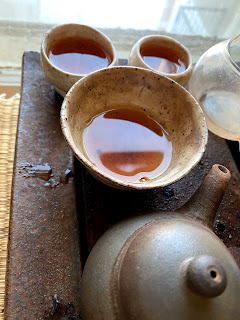 The fourth infusion has a deep coppery almost metallic caramel taste initially with woody hay underneath in the mid layer and smoke BBQ faintly in the back. There is metallic and cool pungency and almost bitterness upfront. The flavours are pretty dense and full and present over a fine but full chalky fine sand. The Qi is noteable smooth but strong and alerting some Heart beats.

The fifth infusion has a coppery woody hay deeper caramel and metallic complex taste up front. The mouthfeeling is thin full fine sandy chalky and Qi is big. There is a vague caramel with smoke finish. Nice strong euphoria is building in the head. The initial taste really holds its complex density nicely with a faint open cool throat. This is a tasty classic tasting Xiaguan with some nice dry storage on it.

The sixth becomes a silky smooth scotch whiskey kind of taste with a nice aged woody kind of oak barrel smokiness to it. The mouthfeeling is a nice soft full thin chalk and mouthfeeling has some opening to it with some cooling but faint. The initial tastes have a long presence in the profile.

The 7th is smooth tobacco taste with background smoke. There is some hay and woods but mainly this the initial taste throughout. The complexity has dropped from here but the stable Xiaguan tastes push through nicely. The 8th seems like a thicker stronger malty oaky smokey. The initial tastes stay in the mouth for a long time and fade slowly. 9th is much the same deep, thick, malty woody smokey oak with long full taste slight smoke thin soft full mouthcoating. 10th is much the same condensed smokey, woody not really sweet but almost caramel and sort of cooling full taste. Chalky thin mouthfeel is satisfying as is the stead tastes that come out here.

11th has a brassy coppery wood smoke caramel taste. The taste and feel of this is classic Xiaguan but nice storage and strength without bitterness or harshness. 12th, 13th, ect it really just goes on and on with this really solid, condensed, typical and good xiaguan taste…. 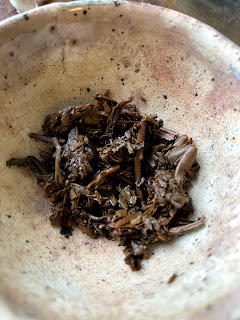 Overall, this is a bit better than average Xiaguan with a nice dry storage but still is very much a typical classic Xiaguan in taste and feel. The stamina is good with nice condensed tastes. But not sure if something like this is worth the $350.00 price tag? For me I can’t do it. But I really do love its classic taste and feel.

Vs 2001 Xiaguan 8653 Huang Yin 450g Special Order- This 2001 is equally brilliantly dry stored but this special order is unlike most Xiaguan in that it is more bitter, stronger Qi, stronger sweetness, and is even still quite aggressive. I like this one better of the two but it is not really representative of classic xiaguan. This 2003 Xiaguan is really more typical Xiaguan but is a bit better than average. Both nice xiaguan.