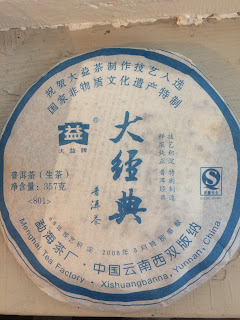 I have a history with this cake from years ago.  My puerh drinking buddy in Victoria, once brought this one over for us to drink in 2010, I think.  He was looking for a suitable cheap everyday drinker puerh and wanted to know what I thought about it.  After the session, I convinced him to buy a tong of the famous 2001 (aka 90s) Ding Xing  through the original Taobao dealer.  I think the Ding Xing was $40.00 a cake back then and this "Big Classic" cake was around $25.00? I paid $38.00 ($0.11/gr) from Tuo Cha Tea last year (it also had 10% discount applied for bulk orders on top of that) the price has gone up to $45.00 ($0.13/g).  Years back my rationale was that the 2001 Ding Xing is just a much better value so why bother with this Menghai.  He agreed a bought a tong for everyday drinking.  At that time this Menghai "Big Classic" was not quite ready to drink even.


An interesting thing about the 2008 Big Classic is that everyone still has this cake sitting around (and the famous Ding Xiang is hard to track down these days)!  … Tuo Cha Tea, Puerhshop, Yunnan Sourcing, King Tea Mall… they all have it.  That really says a lot.  If it was good, surely there wouldn’t be any left… would there?


From what I’ve read about this one is that Menghai used a blend of older leaves to make this recipe. That means that some of the actual tea material is older than the date stamp. I read somewhere that the average leaf grade in this recipe is “3” but I can't remember where I read that.  Seems like a Menghai factory tea that is truly ready to drink.  So let’s crush this one with a meditative mind… 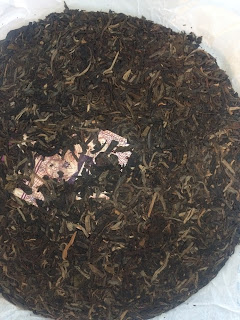 
First infusion is a warming broth of heavier, grounding mellow tastes.  It has a soft full feeling.  There are woody slightly cinnamon tastes that greet the mouth initially then slowly traverse into a creamy barely sweetness and coolness.  This tea has a complete, round, fullish, mellow feeling right off the bat.  A nice slight sweet cinnamon tastes lingers on the breath.


The second infusion presents more now with a sweet round deep wood and slight cinnamon taste.  The taste is such that it pushes saliva onto the tongue.  This infusion has a pronounced returning sweet coolness.  This tea has a complete taste and is ready to drink now semi-aged without a need to age further.  It has a nice warming comforting feeling that I used to get from 10 years old Menghai factory tea that was more humidly stored than this very dry Kunming stored one.  However this tea almost lacks everything else which would identify it as Menghai Factory.  However, this tea is also sufficiently alerting as well, it has that typical and welcome factory Qi. 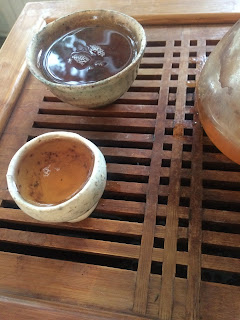 The third infusion presents now with a more woody-slightly malty raison taste.  The wood taste extends itself into the mid-profile and aftertaste.  The sweetness and cinnamon taste is much less here as the mouthfeel fills out and is just barely drying on the tongue.  The taste of this puerh is not exciting nor complex but rather stable, round, and reassuring.  The qi pushed me into a high state now- I feel like I am a tiny tiny bit floating here.  The qi is quite a relaxing, in the head type qi but also is sufficiently alerting.  I like the Qi of this tea for the price, even if a bit typical, at least it has some gas in this aspect.


The fourth infusion flattens out a bit more with the wood note now predominating and the sweeter notes of raison and cinnamon now being delegated to the aftertaste or breath.  The taste is comforting on this very cloudy morning but lacks anything interesting or complex.  The simple tastes are enjoyed.


The fifth infusion has resorted back to that more balanced creamy sweet raisin wood taste.  The sweetness feels more rounded here now.  The mouthfeel remains just a touch dry and the throatfeel is open but not significantly stimulating.


The sixth infusion is a nice smooth mix of slightly sweet creamier notes and deeper woody notes over a nice full slightly drying mouthfeel.  Different fruit notes of watermelon pop up on the breath in this infusion which I enjoy. 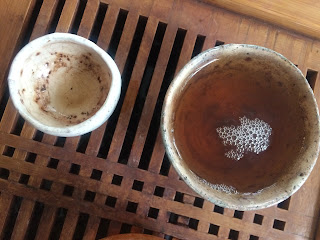 The seventh infusion feels a bit more watered down now but still flavours exist.  There is still a mild cooling in the aftertaste and still a sweet creamy edge on the mainly woody taste.


The eighth starts to flatten out but still significant flavors are still there echoing the earlier infusion.


The ninth and tenth still have a nice slightly cool finish and woody slightly sweetness to them.


This tea is long steeped and pushes out another few infusions of woody raison notes.  This tea has decent stamina and tastes good for a longer time.  But the flavors are a bit muted throughout. 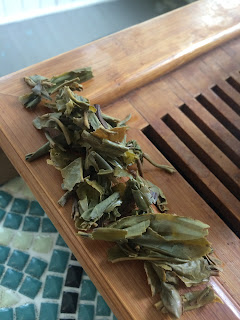 My overall thoughts on this tea are much more favorable than my run in with this tea years before.  It has seemed to improve with a bit more age.  Years before I had previously thought this tea to be too typical puerh taste and too weak with not enough vitality.  Years later it hasn’t really gained strength or that much interesting depth but it is easy enough to drink.


There is something about the way this one feels that I quite like but can’t really put a finger on it.  It's like factory Menghai Qi that is curbed down a notch.  I am quite found of the storage of this tea which shows signs that the older material was aged in more humid Xishuangbana for the first few years before being pressed into a cake.  Then it undergone drier Kunming storage for 9 years.  This tea has this storage feeling and really feels like a dry stored tea that has had its sourness and harshness chopped right off.


Due to the above reasons and because the price at Tuo Cha tea is really low (remember that you are getting 2005ish material here),  I can recommend this tea for its simplicity and easiness to drink.  It is not terribly exciting tea but nor is it offensive in any way.  There is some beauty in its simplicity but nobody finds the mundane worth it, really.  Its possible that I would be buying more of these as easy everyday drinkers if it weren't for the fact that I have another handful of Menghai Factory cakes from this order (link).  This is my favorite, by far, out of the order but only due to the fact that it is really the only one out of the bunch that is actually ready to drink.  I ended up drinking the whole cake up already.  That at least says something.

However, I have learned from recent orders that if it wasn't good enough for you to buy then you probably shouldn't buy it now, at least not in any sort of volume.  The simplicity of this cake and easiness to drink also reminds me of this 2010 Fangmingyuan 0842 Anniversary (which is $0.11/g)  in its mild hay drinkable Menghai charms.  They are both around the same price and both pretty easy, don't think too much about it, kind of puerh.


Early reviews of this tea by other bloggers include this review from Hobbes of the Half-Dipper.