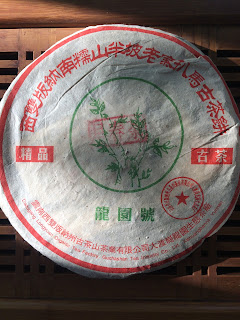 I have to say, I was hopeful with this 2004 Bama that I purchased for $35.50 for a 380g cake ($0.09/ gram) in my second order from Awazon.  I have one Bama cake  and its one of my favorites.  Unfortunately there is only about 150g remaining.  I think most puerh drinkers have no idea where Bama is.  Have you ever heard of Bama?  Bet you don’t know where it is.


It’s a small town between Nannou and Menghai.  It is often classified as Nannou because it shares some broad similarities in profile. My logic was this… This cake was simply overlooked because of poor name recognition and was still a good but overlooked cake… what are the odds? 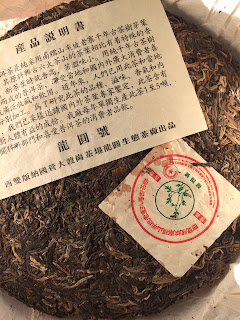 When opening the cake there were two telltale signs of a suspicious puerh cake.  First the Neifi was loose and second there was an unusual sprinkling of a few white buds on the top layer of the bing.  Not good.  I have never known a cake to be of any quality with either one, never mind both, of these indicators.  Another abnormality is that this is a 380g cake- never herd of that one before.


Dry leaves smell of faint fruits- cherry and pear.  Not bad so far…


First infusion presents with cereal and beef jerky-like tastes which transition quickly to mint which disappears quickly into a dry muddy floral fruit sent on the breath.  The taste left in the mouth is a bit metallic and flat tasting.  The mouthfeel is thin, somewhat dry and has a sharp, thin, barely chalky feel at the back of the tongue and into the throat.


The second presents with a long cool taste the trails through the not-so-pleasant profile of this tea.    There are still that beef jerky-like taste mixed with grains but it is quite muted now.  A flat, dry wood taste is more apparent in this infusion.  This infusions’ most obvious flavours are nice sweet, perfume-like sweet cherries in deep floral tastes.  The mouthfeel thickens and becomes less dry and more dense now which holds the long minty note and deep sweet fruity florals.


The third infusion is more astringent and drier than the second.  The dry mouthfeel carries cool tastes and sweet berry florals over a dry wood base.  The beef jerky and cereal tastes are gone now.  There is an uncomfortable dry astringency that is left in the mouth.


My body doesn’t like this tea.  It has gotten to a point from drinking lots of puerh over the years that if I’m drinking puerh tea that is heavily sprayed it will usually react with symptoms such as a feeling that isn’t right in the stomach like a certain tightness, allergy-like runny nose, uncontrollable sneezing and itchiness usually in the legs.  It is definitely doing this now with this tea.  I can be certain that this one had its fair share of chemicals thrown at it because these symptoms are quite strong. 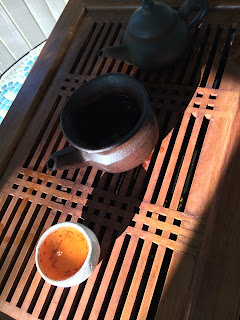 I am unsure whether I am just reacting to one chemical or one family of chemicals or just a certain combination of chemicals or a certain threshold of a chemical or chemicals.  What I do know is that I do react to something and sometimes its almost unnoticeable where other times it causes an extreme reaction.  Most often the reaction is to plantation puerh but not always.  Alternatively, some plantation teas that I'm pretty sure are sprayed I will never react to. This reaction developed a few years ago and it only really occurs for about 1/5 of the teas I try.  But it is a very convenient superpower to have!


In Traditional Chinese Medicine this type of influence is called “Evil Qi” or “Li Qi”.  Evil Qi is a type of pathogenic energy that doesn’t come from a natural source or change of season but comes from an unusual external exposure.  And, well, the name says it all, it has a negative influence on the body.  Agrochemicals fit the bill of containing Evil Qi if exposure to them creates a feeling of disharmony and illness.
Just because a puerh is strong or harsh doesn't mean it contains Evil Qi because this strength could very well be the natural Qi of the tea.  There is a difference between an uncomfortable Cha Qi and Evil Qi and this should not be confused.
Okay... so reluctantly I go back to this tea a steep up the fourth which is mainly dominated by a dry wood profile and dry mouthfeel.  There are still some faint florals and fruits but they are overcome now mainly by an unpleasantly dry woody profile.


The fifth infusion is much of the same monotone tastes.


No need to put myself through any further, I stop the session here. 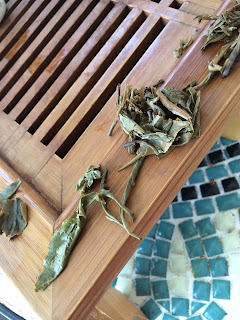 Even 4 hours later my stomach can still feel the effects and my left Kidney feels unwell.  Overall I have a feeling of disharmony and feel not as good. 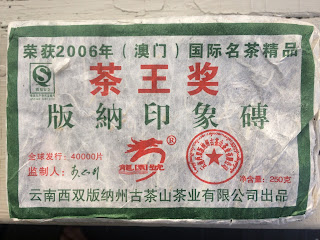 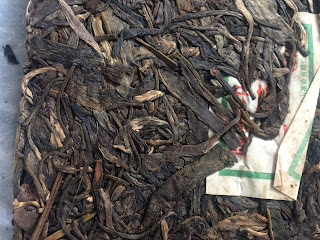 
The first infusion presents with nice sweet tobacco wood and hay notes in a creamy sweet mouthfeel.  There is a nice mild creamy-sweet cooling aftertaste.  There is a nice creamy sweet richness that supports this tea though the taste profile but over the taste is a woody hay taste with just a slight bitter edge.  Sweet cherry fruits show up on the breath minutes later.


The second infusion brings smooth creamy sweet tastes with a vegetal sweat wood base.  The sweet cherry tastes are clearer in this infusion.  Overall the mouthfeel is decent and has a soft fluffy, chalky sensation that covers most of the mouth.  The woody hay notes comprise the base of this tea.


Unfortunately, I have some symptoms of a mild-medium sprayed puerh.  My legs starting feeling slightly itchy and my nose starts to run.


The third infusion has many more of these nice sweet round creamy woody notes.  There is a bit of a bread-yeast taste as well as vegetal taste that lingers at the base profile of this tea which later transvers to sweet cherry fruit on the breath. 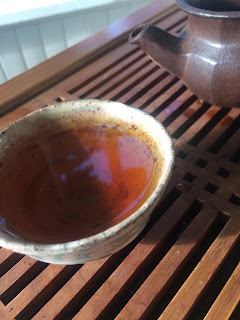 The fourth infusion has a strong cool sweet aftertaste.  The tastes that precede it are creamy wood tastes, vegetal tastes, and fruits.  The mouthfeel develops a certain chalkiness to hold in the tastes.


The fifth offers much the same with more tobacco notes coming out now as well as more woody-vegetal notes.  The deeper notes start to emerge more in this infusion.


The seventh infusion becomes more watery but still maintains lots of strength with a long muted menthol sweetness.  The cha qi of this tea is nothing too special- a very common feeling of robust alertness and vitality which I expect from a tea.  There is a bit of stuffiness in the head.


The eighth holds much the same the ninth and tenth fade considerably. 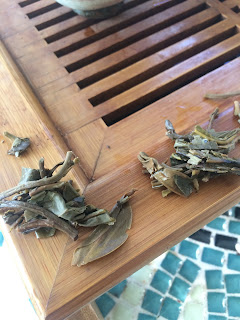 There is Cha Qi and then there is Evil Qi.  The 2004 Bama definitely has enough Evil Qi that it overwhelms the Cha Qi in the body.  The 2006 Banna Impression has enough Evil Qi to convince me to avoid drinking this tea.  I actually think the puerh brick is reasonably enjoyable for the price but it has just enough Evil Qi that I can’t ever seeing myself drink it anytime soon.  I place both of these teas into quarantine destine for the garbage dump sooner or later.  Evil Qi can’t be ignored, aged out, nor can it be valued.