These two Six Famous Tea Mountain puerh arrived in my first order from Awazon.   I remember seeing lots of 6FTM cakes in the puerh tea shops in Korea in the mid-2000.  I know that I have tried many 6FTM puerh before at these tea tables but I have no memory or recollection of how they tasted.  This seems to be a theme of the literature online about 6FTM- unmemorable.


But it wasn’t always like that.  Even the western online vendors used to be full of these cakes.  Six Famous Tea Mountain puerh factory offered puerh that was very different than the factory puerh that was mainstream at the time.  It was a response to the overly bitter and strong cakes produced by Menghai and other tea factories which were the most popular at that time.


A few years ago Hobbes of the Half-Dipper re-discovered 6FTM cakes and many are reviewed on his blog at this time.  These two were either discussed positively in the comment section or favorably reviewed by Hobbes.  However, because of differences in the names of these teas, tasting notes, differing wrappers, coming from different vendors, I am unsure if these are the same positively reviewed teas.  This is what makes purchasing puerh online in the West such a gamble. 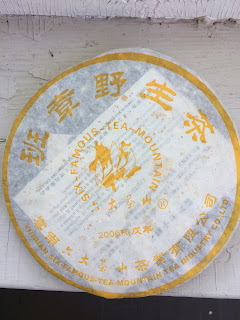 There is a bit of ambiguity on the Half-Dipper whether this cake is undrinkable or excellent value.  It is possible that it is even the exact same cake wrapper with one cake being a fake and other real or perhaps it is the same cake but one with off storage.  Only one way to know which one this is similar to… 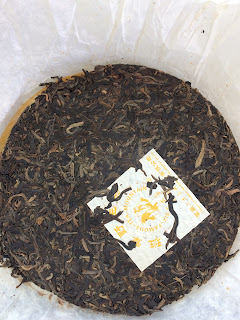 In the first infusion flatter vegetal notes comes first with a nice leathery taste.  A soft cresting malty caramel sweetness ensues finished by a tobacco taste which stays in the mouth.  The mouthfeel is decent and feels full enough to carry the aftertastes forward.  The mouthfeel has a mild stickiness to it as well.


The second carries more sweet notes of slight plumb in the mix of leathery tobacco.  There are only suggestions of cool menthol on the breath.  This tea tastes is very much good, if not very typical puerh tea.  It has a mild thickness and viscous feel to it in the mouth and carries these standard puerh tastes nicely in the mouth.  The bubbles formed in the liquor stick stubbornly to the cups and pots. The sensation of this tea doesn’t make it into the throat limiting the depth of taste but what it has, it does quite good with. 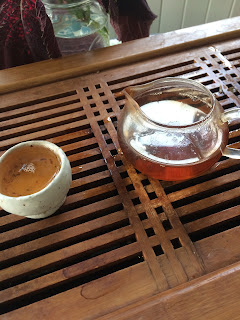 Third you can really start feeling the qi of this tea- again a very classic puerh tea feel.  The body feels energized and refreshed while the mind feels relaxed and clear.   The sweeter plumb notes are more developed in this infusion and taste nice with leather and tobacco.  There is a very slight sour note indicating its age.  The sweet tastes are the dominant now and the flatter vegetal note is all but gone.


This tea is through and through good, typical, unpretentious big factory tea.  There is nothing amazing about this tea but there is also nothing negative about it either. Its strength is in its better than average mouthfeeling which make simple tastes stick and is limited by not really touching the throat.


The fourth shows signs of starting to level off with less of the evolving layers and gravitating to more of a nice singular note.  There is a nice cohesive leathery and creamy malty date fruit sweetness to the tea here.


The fifth shows more of the mild barely fruity sweat note riding itself into the aftertaste over leathery and even slightly woody notes.  There is some menthol returning in the mouth.  A very stable tea.  For the cheap price this tea, it is very drinkable and I am happy with it for what it is. 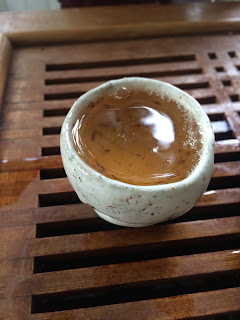 The sixth is much the same and I am still not adding any steeping time to the infusions just the 20 second pour of the pot.  Simple, yummy, puerh tastes are delivered.  A soft smokiness is detected in this infusion.


The seventh is extended another 10 seconds but remains simple yummy tea.  The nice part here is the nice simple plumb fruit note.  The aftertaste carries this note for a while.


The eighth and ninth infusions become much flatter with a gummy slight fruit and wood note.  A very mild cool fruit aftertaste is apparent. 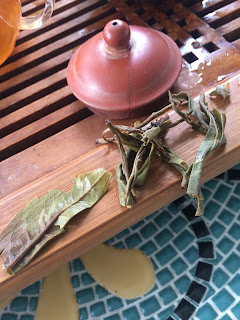 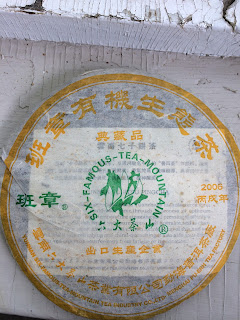 I paid $36.20 for this 357g bing ($0.10/gram).  It was also the last in stock at Awazon and is no longer listed.  There seems to be two different wrappers of the 2006 Banzhang Organic, one has a the Chinese organic certification labelclearly displayed on the wrapper like this one still available for purchase atThe Chinese Tea Shop, and another without such labeling that was for sale at Awazon.  I imagine they are different teas. 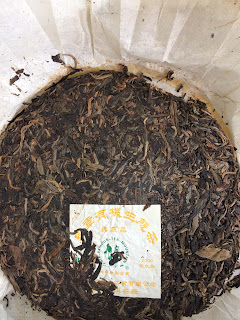 Dry leaves are of smoky, almost salty, with a suggestion of pungent deep creamy florals.


The first infusion boasts creamy sweet and more fragrant than expected floral tastes with a nice thin creamy mouthfeel.  There is a significant smokiness to this first infusion that coats the mouth if steeped quickly.  A slightly sweet floral creamy coolness is left in the throat.  The profile of this tea is over a light mild base of creamy, sweet, slightly medicinal tastes.  The smokiness dominates this first infusion. 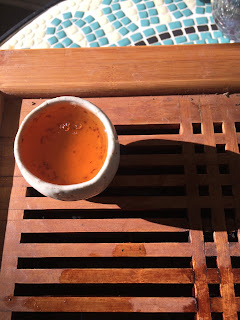 In the second infusion the same flavours become more bold especially the sweet, creamy, medicinal base holding them together.  There is a soft but noticeable bitter astringency to this tea when steeped with more leaf.  The sweet cooling in the throat lasts longer and is more noticeable now.  Even very soft smoky notes linger in the mouth.


In the third infusion the mouthfeel becomes stronger and the taste develops a soft wood base note along with the sweet medicinal note.  The initial taste is of mild creamy sweet florals. Another note that reveals itself is a mushroom taste as well.  This infusion loses a bit to the higher notes as deeper, aged tastes emerge.  The smokiness is still apparent.  The qi of this tea is weak and gives off a quite unnoticeable and very standard mild alertness. 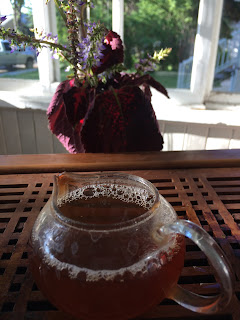 The fourth the light sweet flavours start to fade and the base notes start to take over.  The mushroom taste is now more prominent.  The cooling aftertaste now has more of a light woody suggestion.  The throat feel improves a bit as a glob of saliva is pulled into the throat expanding on simple flavours.


The fifth becomes more monotone in its initial taste- a sweet woody barely mushroom taste.  The cooling returning sweetness is somewhat more enjoyable and more pronounced here.  A smokiness lingers in the aftertaste.


The sixth is pushed harder but still offers very little in the initial taste with still some enjoyable aftertastes to be enjoyed.  A monotone wood taste now gently cloaks the whole profile of this tea when pushed like this.  A faint flat floral and slight melon taste can still barely be grasped. 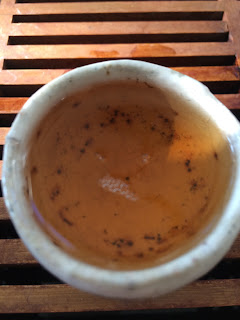 In the seventh and eighth this tea is a bit tapped out with mainly a monotone dry wood with barely suggestions of melon and floral over a still smoky base.


The ninth, tenth and eleventh holds these tastes nicely.  It is mild but still has some enjoyable flavor.  Long steeps push out much the same.


It is interesting what the name of a tea does to your mind.  It is possible that this tea could have at least some Banzhang or Nannuo material inside.  But if this was a blind sample and someone asked me to guess where this is tea from I would probably never guess the Banzhang area.  Interesting, how the brain works. 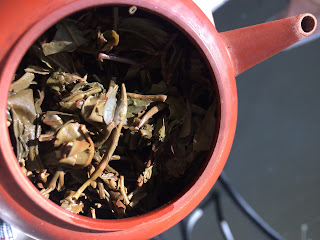 Overall, I am happy with these two 6FTM cakes.  These cakes were both the very last cakes at Awazon which is really too bad.  Out of the two, I wouldn’t hesitate at purchasing a few more cakes, maybe even a tong, of the Yesheng for that price.  It really displays a character and feel in what I look for and love in factory puerh.  The Organic Banzhang is too mild with very little depth.  However, it still has something enjoyable in it and I can see why some people have enjoyed this one as a daily drinker for years now.  Overall, I’m not expecting alchemy with these 6FTM cakes just solid everyday drinkers which is fair value for what I paid.