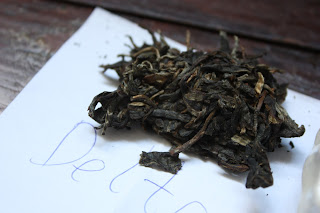 This is the fourth mystery sample from The Half-Dipper's China Chadao Event. The dry leaves smell of distinct bitter-sweet cherries. 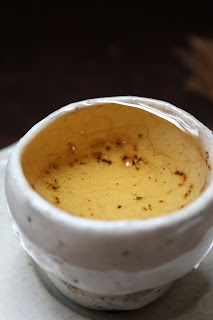 The first pot delivers a mellow grainy taste initially then slight creamy-fruits move under this base grain taste. It has almost malty-aged edge to its sweetness and more of a golden-browish colour. Its mouthfeel is thin and only coats the front of the mouth. 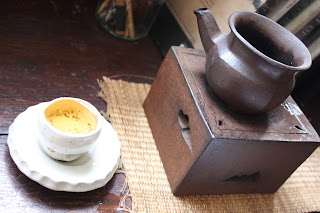 The second pot is much the same with malty-sweet notes mixing with a subtle grainy taste. The mouthfeel is a touch more full now and coats the tongue and roof with a light sticky-dry sensation. There is a chalky-bland berry taste that shows itself just for a flash then disappears. The aftertaste is mainly a bland taste in the mouth. 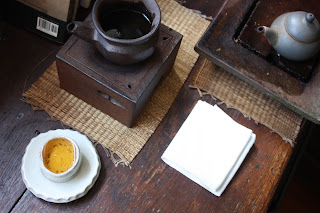 The third pot gives off a mainly malty-sweetness initially then makes its way to a blandish and very subtle fruitiness in the aftertaste. The mouthfeel stays mainly in the front mouth or tongue. Its qi is very mellow, almost unnoticeable. This is not a complex tea but simple and easy to drink, a very mellow tea.

Fourth pot has more of a creamy edge but is much the same simple, sweet-malty aged flavour. It is starting to become more consistent across the taste profile as it slowly fades into a bland taste in the mouth. The qi is barely noticeable, very simple, and very soft on the stomach. 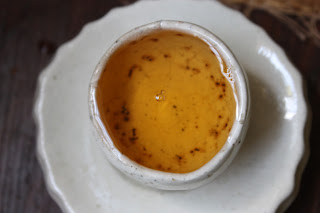 Fifth infusion is much the same as the others- a simple malty taste now a bit watery and even more simple. There is a slight menthol edge and fades quickly found in this infusion.

Sixth infusion is the same but with no menthol taste and a slight melon fruit taste. Seventh is mainly a bland taste with the faint fruity melon taste becoming more distinct but still very muted. The mouthfeel has weakened now. There is a faint bland grainy aftertaste minutes later.

Eighth & ninth infusion are much the same. 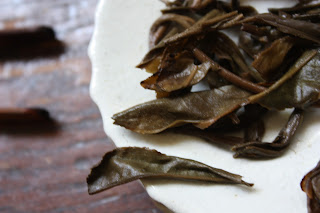 That cup really is pretty. :)