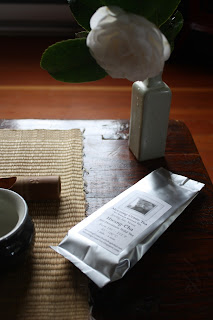 This tea was kindly gifted by Arthur Park of Morning Crane Tea in a recent order. Arthur is famous for giving Dong Cheon a firm presence in North America. This year he has vowed to bring in some smaller artisan productions from the Jiri Mountain growing region. This is the first of such productions and is currently for sale through his blog site.

Arthur claims that this Jeong Jae Yeun hwang cha is true wild Jiri Mountain balhyocha. It produced before Buddha's Birthday is a favorite of Korean potter and friend Park Jong Il. It certainly sounds promising. Let us boil the water and see what these wild leaves have in store for us... 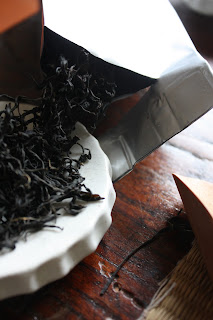 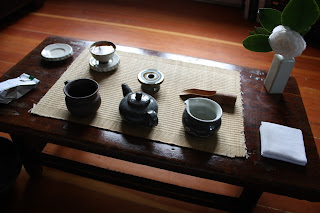 Appreciating the dry leaves reveals light airy fruity notes that are immediately released as the bag of tea is cut open. The black coloured, fig and fruit smelling dry leaves are long and straggly. The give off a stereotypical bready smell that often accompanies balhyocha. 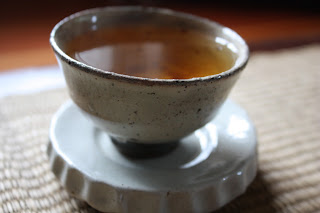 The first pot is prepared and gives off very light, juicy, almost floral notes that fade under juicy-peachy notes. Faint juicy-wood notes shore up the aftertaste over more juicy fruit tastes. The mouthfeel is soft, simple, the middle of the tongue is slightly dry. The back and front of the mouth salivate. Qi is gentle warming and gives the body a nice warm glow of warmth. 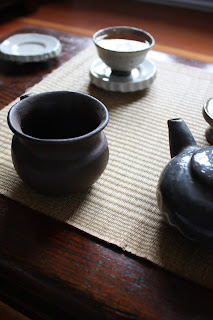 The second pot is prepared and very juicy, smooth, soft spicy slightly fruity simple taste spreads throughout the mouth. The mouthfeel is very smooth and juicy. The aftertaste contains suggestions of bready notes. The taste of this tea is very pure and clean. The qi is very nice soothing and warm. 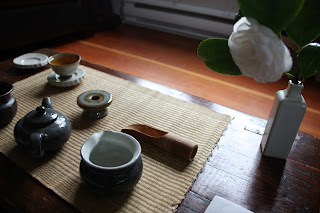 The third infusion is a little more spicy in the initial taste. It forms one of the interestingly simple spicy-peachy-persimmon tastes. The taste is carried on a soft, slightly chalky, nicely juicy mouthfeel. One feels the relaxing influence of this tea. A subtle woody-bready taste is left lingering on the breath. 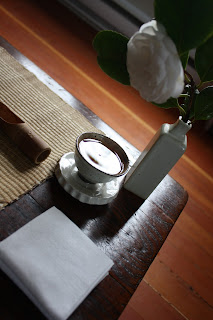 The fourth infusion is very smooth now with a rich taste with flavours similar to the last infusion. There are juicy-fruity notes left on the roof of the mouth. It is slightly dry on the roof as well. 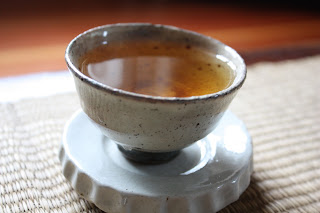 In the fifth and sixth infusion a mellow fruit taste predominant with light-juicy-woody notes underneath. There is a slight spicy, but even slightly cool, menthol edge that disappears in the profile- very nice. The mouthfeel is light and full with dry and juicy patches making things interesting in the mouth. The upper throat has a lightness to it now. 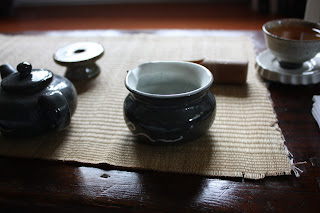 The seventh infusion shows mild signs of fatigue as the main flavour is now faintly fruity with more woody-bread notes base holding up the light flavours. The mouthfeel remains soft and full. 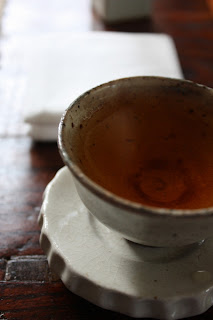 The eighth infusion is treated with hotter water and longer steeping time and pushes out woody, juicy tastes. The cooling woody-menthol-like finish in the mouth is enjoyed. The mouthfeel remains light and full. 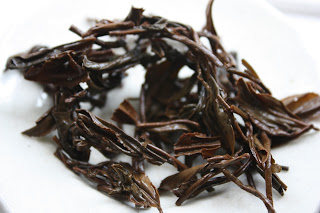 The ninth infusion is put to an overnight steeping. In the morning a thick, syrupy  fruity wood tastes with slight tangy maple syrup finsih is left in the cup.

After drinking this tea, one is looking forward to what Aurthr Park is offering in 2013.

Now this is my kinda Hwang-Cha! Got a couple bags of this as well as two types of Dok-Cha from Arthur. This Hwang-Cha's dried leaves are so thin and elongated, makes the tea scoop useless. Arthur sent me two types of Dok-Cha, one cake and one disk. He told me that the cake type needs to be roasted before brewing but the disk type doesn't. This leaves me wondering, how do you know whether to roast or not? Also I have no idea what the water to tea ratio should be. I know that the tea should steep in simmering water for 2-3 hours, but that's about it. Any advice you could pass along would be appreciated.

Hahaha... yes the scoop is quite useless with this balhyocha. Just reach in the bag pull some out with your fingers and stuff it in the pot... hahaha

This post should help you prepare the smaller coin type ddok cha:

The larger disk type ddok cha can be brewed similar to balhyocha with a bit hotter temperatures then green tea.

Looking forward to your thoughts on these ddok cha!

Readers please check out Bret's post on this tea: