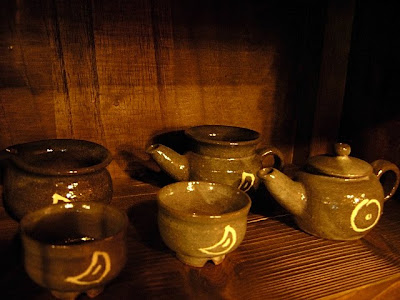 You will notice that standing out from the mundane grey colour is that of a white symbol placed on the side of each piece. Each of Kim Kyoung Soo's grey and white pieces has either a symbol or traditional Chinese character. These symbols have deep meaning. In fact the symbols on Kim Kyoung Soo's grey and white pieces are not really just symbols, they are actually the very first forms of Chinese pictograph writing known as Oracle Bone Script (see here for pictures of the below characters)- the most simple and natural form of writing in Asia. As a result these ancient pictographs reminds us of tea's long history while also encouraging us to prepare and enjoy tea in a simple and natural way- the Korean Way.

A pictograph of wind through the clouds is also found on Kim Kyoung Soo's pots and tea caddies. Wind is yang in nature and is a symbol of action, a yang quality. The wind pictograph is found opposite the moon pictograph thereby acting to balance yin and yang. And so things stay in harmony with nature.

The grey and white tea caddies also have yin and yang symbols on them- one on the lid and the other on the jar. They have either a sun and moon or wind and moon pictograph or character on them. Balance is to be achieved when tea is stored. If stored improperly it will either aquire an imbalance of yin energy or yang energy thereby degrading the tea. The tea caddy rests in the middle of the tea table, above the teapot, where yin and yang energy is balanced. And so things stay in harmony with nature.

The grey and white serving pots and cool water bowls also have both yin and yang pictographs or characters on them. The cool water bowl sits to the right of the teapot and the person making tea, a yang position and the serving pot sits to the left of the teapot and the person making tea, a yin position. They too act to balance the energy of the tea contained inside. And so things stay in harmony with nature. And so when all pieces are in harmony with nature, they are in harmony with the person preparing tea, and the guest drinking tea- this is the Way of Korean Tea.
It should also be noted here that these symbols are more than just symbols but they represent the true energetic influences of the traditional Korean potter, living on the mountain, firing their pottery under the sun, moon, clouds and winds of the mountain sky. The potter therefore imparts this energy into their work. When preparing tea with Kim Kyoung Soo's white and grey teawear we are reminded of this and encouraged to embrace the harmony of the potter, the harmony of nature, the harmony of the Dao.