2009 Handong Green Tea- Picked In The Spring, Oxidized Through the Summer, Roasted In the Fall 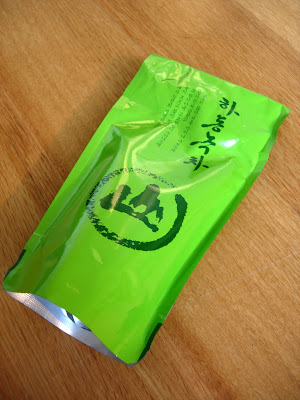 This tea was shipped with others from Korea a few months ago. It gives no hints as to what kind of tea it is other than the generic 'Hadong Green Tea' package that is used by the producers in the area.
Tearing open the top of the bag then opening the zip lock reveals a surprise- the smell of roasted nutty chocolate and cherry notes that transform into a more common nutty cereal odour. This doesn't smell like your typical Handong green tea. Perhaps its a yellow tea, or an autumnal green, maybe a roasted green? 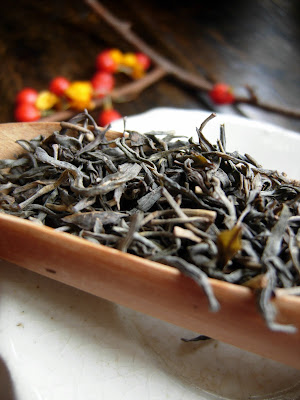 The leaves are scooped out and examined- small, faded, dusty brown leaves. The dry leaves look too dark to be a green tea yet too faded, dusty, and light to be a yellow. The leaves are rolled like a green tea, not tightly wound like a yellow. These clues and the predominately toasty cereal scent of the leaves suggests a roasted green tea. A tea not all that common in Korea.
These leaves are guided into the pot and after the water has cooled, it to is added. The tea pours out a turbid yellow-brown. 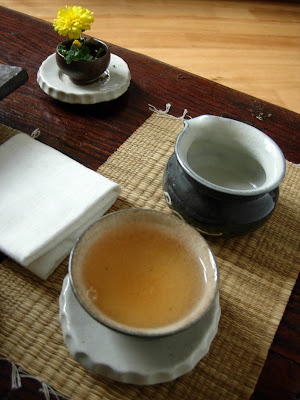 The first infusion carries a strong taste of hay, nuts, and strong cereal notes that almost drown out all of the sweetness and actual tea tastes. This first infusion is pondy and roasty. The lips numb, the tongue and mouth are sparsely coated. Its body is thin in the mouth.
The second infusion brings more of that hollow roasted cereal which is still felt mainly on the lips, tingling them. The flavour becomes more tart. Hay notes linger just a short while on the breath. 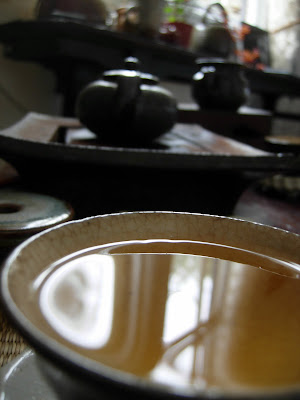 In the third infusion a rubbery mouthfeel and aftertaste develops. More hollow graininess. It doesn't move much from here. The later infusions are more of the same with the taste becoming thinner, lighter, and more grassy. In the end one attempts to over steep this tea, attempting to pull something interesting from it. One is only greeted with thin, bitter, astringent graininess.
The faint qi of this tea is quite mixed up and impure. It leaves one feeling somewhat more energetic but more hazy and lethargic than one should feel from a green tea. The overall presentation of this tea leads one to believe that it was improperly produced. The production did not harmonize with the tea resulting in a product that doesn't flow throughout the body and mind but instead clouds it. 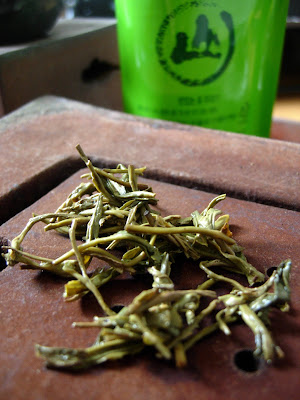 When the wet leaves are examined there are little flecks of ash deposited in the small, still curled up, leaves. This could be evidence of a wood burning roast. Roasting tea using a wood burning method is much more difficult to achieve good results compared to the easily controlled setting of gas roasting.
One has learned from this tea. One hopes the producer learns from this tea too, correcting mistakes and improving production next year.
Peace
Note: The comments clear up which type of tea this is.
Posted by Matt at 8:47 PM

Sorry you got a bad tea... I wonder why it doesn't say what it is? That seems rather odd to me. Oh well drink some good tea so you can forget this one. :)

Actually the tea wasn't horrible, it still had a somewhat enjoyable simple toasted taste. It was free so can't complain too much. ;)

It is common practice to use the generic 'Hadong Green Tea' boxes and bags for small producers in the region. It is an easy way for the small production producers to lower the total cost as they don't have to pay for the design and small run of their own custom packaging. It isn't that unusual to see a unmarked package, but usually there is a sticker on the bag or box that tells what estate or specific area the tea came from and the date it was produced. Maybe the sticker fell off or maybe the box that this bag came from was marked.

One is boiling up the water right now...

Free tea is always great. ;)
I have been having really bad luck with green tea maybe its just not for me.

That's a valid reason for the unmarked bags and boxes, I hear that they are sometimes the best too, the small production producers not the bags and boxes.

how was the second one?

With the small producers, the tea can be really good. They are the most fun anyways.

Now one is sipping a second flush Darjeeling from Giddapahar Estate. Ones head is alertly buzzing. Good tea. Expect a review soon.

What's in your cup today?

Today I had an excellent Aged Oolong. 1999 Tie Guan Yin Oolong. It has a great feel to it very smooth. I will have a review up on this one the next time I try it... I forgot to take pictures again, I seem to do that when I am having a great tea.

I am debating on whether to try the 60 year old Baozhong stems I had yesterday again. They were so interesting and earthy, so great. I already have the review up for them.

hi matt! i was explane about that tea when you visit..

it harvest at spring but roasting at autumn so this tea tease is different other popular greentea..
Before roasting..it must be fermentation so it teast little bit yellowtea..

Thanks for clearing this up.

This tea is picked in the spring season like a green tea, then left to oxidize through to fall. In the fall it is roasted. One did try this tea a few years ago and thought it interesting.

That explains it. The tea feel like an autumnal tea on a superficial level, this is because it absorbed the energy of autumn as it was left to oxidize, and was roasted in that season. At a deeper level this tea hints at spring, when these small leaves were picked. Also because it was left to oxodize it tastes a bit like a yellow and a bit like a green. The qi is, in some ways, 'confused' as where to go- containing elements of spring, summer, and fall- rising & descending.

Yesterday, one enjoyed this tea with a Korean friend here in Victoria- she particularly loved the scent of the leaves and the roasted nature of this unique tea.

Thanks Justin for sending this one,

If you would like to taste really good Korean green tea, join us For tea in Korea. To learn more please go to www.TeaTourKorea.com This is like a master's class in tea and tea ware. It is a non-profit tour and hosted by knowledgeable folk. Please pass this information on as we have no budget for advertising only the good will of those who woule like to have more events like this happen.
Thanks.