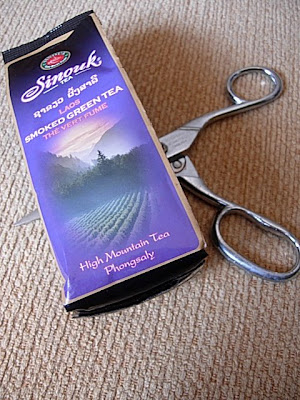 This tea was picked up on ones journey for less than a box of cheap bagged tea on a supermarket shelf in the west. The foil pack reads, “Prepared by hand and smoked in a bamboo-formed stick, this tea has special lasting fragrance and taste”. Hmmm... Let's find out.
Using scissors to snip the top of the foil pack allows the beauty of this tea to be revealed. If one bought this tea only to sniff its dry leaves, it would be money well spent. Its odour is quite unique for a tea. It smells like none smelt before. These leaves smell like a hickory smoked mountain forest, a bit of mesquite sweetness covered with musk all under a layer of smoke. These dry leaves have that 'Korman forest' scent that one experienced with another sample from the area. They smell somewhat like some of the better smelling 'smoked tea' found in Phongsali's market. 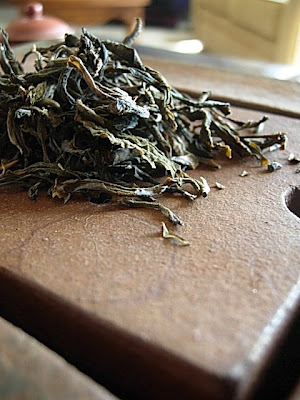 As one peers inside, past exciting odours, one sees dry leaves forming a tangled web of long, thinly rolled leaves that sport a variety of muted greenish colours all the way from the more brown to more green spectrum. There are no small leaves here, all are of the medium to medium large type, almost exclusively unbroken. 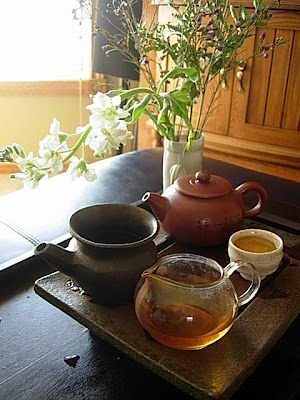 They are placed in a large yixing pot and near boiling water is added. Initial smoky nuances dissipate into respectable puerh sweetness. This tea is very 'shang puerh'. The liquid is a pale clouded whitish yellow. Smoke hints at tobacco in the mouth for a few seconds after swallowing, but shies away from making it to the nose. In fact this gritty timid feeling doesn't want to leave the safety of the front of the mouth and tongue. 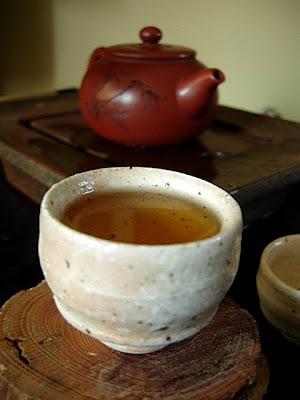 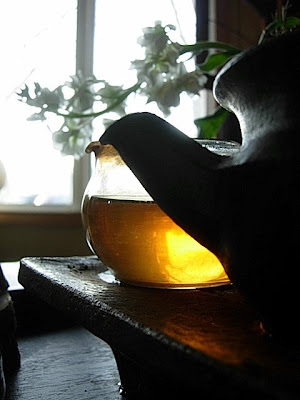 Its taste is lightly smoky peurh, mixed with the thin misty fields that surround the mountainous village of Korman as well as subtle minty-licorice. These soft flavors are like the workers in the dense foggy fields of Korman, if you don't pay attention you are sure to miss them. Just as you spot one in the blinding fog it seems to disappear once more, in an instant never to be seen again. These ghostly flavours are only found in perhaps an infusion or two as this tea looses its legs fast. A very common puerh taste is drug into the mountain scape distance. This tea lacks stamina and putters out quickly. 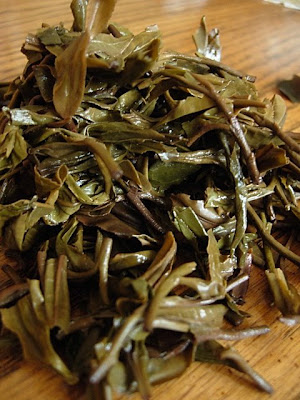 On the upside, this tea can be enjoyed without the strong edginess of a young shang. Unlike infant shang puerh, this tea doesn't shake up the guts. Its qi takes a bit of time to kick in, but when it does, it gently alerts gathering more on the sides of ones core than becoming stagnant in the stomach. Although, this chaqi is very light one enjoys its movement in the body.
Peace
Posted by Matt at 12:22 AM

I would love to find this tea again in France, I met Ong Ya in his little farm in the Bolaven Plateau, he has a lot of experience, and he is organic- mainly because chemical product are to costly-