Tea In Laos Part Five: French Colonialism, American Bombardments, And The Origin Of Tea In The Southern Laos Province Of Champasak 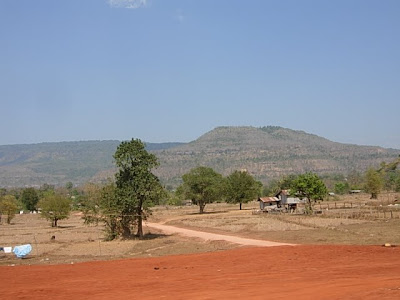 It all started back in the early 1900s when the French deemed the area know as the Bolaven Plateau in Southern Province of Champask a perfect fertile ground for planting lucrative crops. At around 1300 meters above sea level the French started planting coffee, rubber trees, bananas, and tea on the cool, high, flatlands of the plateau.

It was coffee, not tea, that stole the show here. The Arabic Typica that was shipped home was famously touted as "The Champagne of Coffee" all the while a few small tea crops were being modestly harvested in the shadow of Laos world renowned coffee. Many of the initial French planters fled with the French during Laos independence following WWII in the 1950s. With the land in the hands of Laos people, there was big plans for this booming region and famous coffee.

Unfortunately, the production of Laos coffee came to an abrupt halt in 1967. Because of its strategic importance to both the Viet Cong and the USA it because a ground of war not coffee or tea. It was almost carpet-bombed right off the map by US bombardments meant to stifle Viet Cong advances South. Following the war there was a period of rebuilding and clearing unexploded ordinances which, to this day, pose a legitimate threat to those who farm on the plateau. The tea and coffee bushes, a hardy bunch, managed to survive the ravages of war. 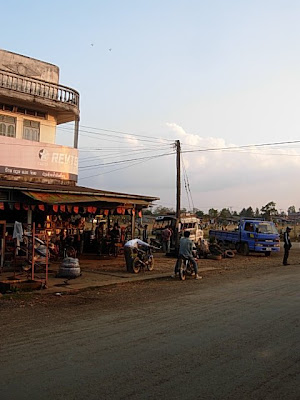 It took decades for this region to regain its lost glory, but slowly, starting in the 1990s big coffee companies operating large plantations moved in and people started to take notice once more. But if you visit the plateau town of Paksong, you find out quite quickly that the common people, not the big corporations, are the driving force behind the coffee movement here. And riding modestly on all this hype is Paksong's delicious green tea. 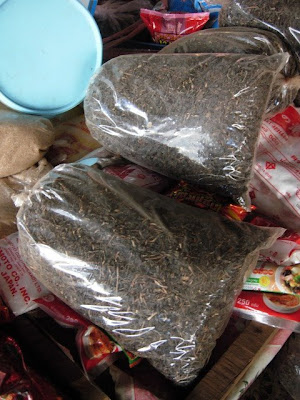 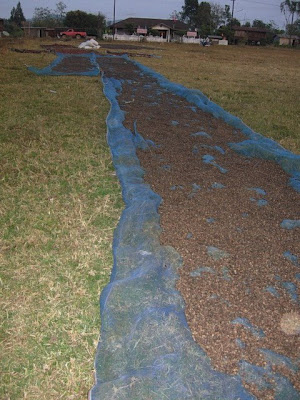 It seems like on every street there are long homemade mats overflowing with fresh picked coffee drying in the open air. If, by chance, you take a peek into an old open air concrete structure in the center of town, Paksong Market, you will likely find, modestly situated between famous Arabic Typica, Arabica, and Robusta, large clear plastic bags of green tea.

From 1992 to 1994 I spent a lot of time traveling the jungles of Laos with other members of the POW-MIA group out of the American Embassy in Bangkok. We flew by helicopter to remote regions which had no roads. Your posts remind me of those interesting adventures. Laos is made up by a majority of hill tribe people scattered throughout the mountains and some had never seen a white boy before our arrival. What memories.

When my wife and I lived in Phnom Penh, Cambodia, I used to buy Lao coffee from one of the local merchants. It was roasted dark and tasted very much like Hawaiian Kona. Unfortunately I was not yet into tea so I did not notice the tea that was being sold.

Great and interesting posts on Laos. Loved the Lao people and could even understand a lot of the language as it is very similar to Thai. The hill tribe languages, though, was a different situation.

Lao people and the awesome nature of Laos definitely make it a diamond in the rough. One won’t really elaborate on the coffee (this is a tea blog) but now that you mentioned it, it does resemble Kona Coffee. Damn good coffee!

Thanks for sharing some of your experiences and passion about this often overlooked country.