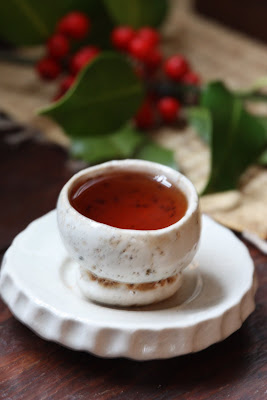 Email ThisBlogThis!Share to TwitterShare to FacebookShare to Pinterest
Labels: zen

Matt, you should enunciate prize competition: "lets gues what a tea is in the cup" (I can offer the prize:)

Anyone who can guess what tea is in the cup wins!!!

Thanks Petr for offering the prize, your new blog is a real treat.

My guess would be some aged Sheng - especially when comparing the picture to this post Matt published not so long ago: http://mattchasblog.blogspot.com/2010/12/1980s-sheng-fangcha-nada-sample.html

Merry Christmas to you as well clever Michal!

To me, it seems like the same tea as in the post - "1980s Sheng Fangcha" - but, rarely drinking aged puerh, I can hardly say.
I guess I will leave the guessing on bigger puerh enthusiasts ;-)

So the chalege was accepted- that is nice.

Matt Happy Holidays, In 2011 taste the tea in good health and prosperity.

Or... Fo Shou from Wuyi Mountains?

But you, Matt, usually use this white tea cup for Pu-erh's :)

It's my first post here, but I'm watching your blog for more than year. I really appreciate your works.

You're right this cup is pretty much only used for puerh.

Thanks for finally commenting so kindly. Feel free to add your thoughts at anytime.

Happy New Year to you and your's as well!

Ok, I'll take a stand ... I went along with the asumption that due to the cup this should be a pu erh and went through posts with this lable ... Aaron Fisher's mystery sample would fit the colour well, but it has no year, origin ...
I'll go for this one:
http://mattchasblog.blogspot.com/2008/08/lessons-in-puerh-production.html
2001 from Winan Mountain

I am back from our New Year trip to mountains so please tell us, Who is the winner?

...as there isn't cup
how we can ask what is in it?
we can see only rain in fall mountains...

The answer to what tea is in the cup:

While first one must say that this post was initially supposed to reflect a meditation, a reflection, a slowing down that only a deep session with tea can achieve. This is very much needed this busy time of year. This post was to purvey a sense of presence, something beyond a certain type of tea, a mountain, a year. In this spirit, Cloudmountain would have the closest guess.

What actual tea is in the cup is 1997 Heng Li Chang Bulang from Essence of tea. This sheng puerh was stored in Taiwan and is an excellent cake. In this matter of fact way of looking at it, Martin would be closest.

Then again, there is always Michal Tallo who was the first to guess that it was sheng puerh.

So Petr, who do you think should receive the prize Cloudmountain, Martin, or Michal Tallo?

Matt, you don't make it easy to me:) Anyway I think Michal Tallo is the winner. He was the first guessing that it is a sheng, both are from Nada (the essence of tea), and was the first who join the game. Also Martin as well as Cloudmountain were after deadline (New Year's Eve)

So congratulation Michal! The porcelain cup with white snake skin glaze is your. Hope you will like it.

Happy tea experiences in 2011 to all.

Agreed, Michal Tallo did nail it right off the start! He is the winner!

Thanks Petr for donating the prize and having a bit of fun.

Haha... I just want to add that when I've first read Cloudmountain's comment, my immediate thought was "Enlightenment, he/she is right. How simple it is"
Because that seems more accurate to me than any other guess, accurate for any cup of good tea and the experience of enjoying it.

Then, thanks Petr and Matt, for the beautiful cup and for a bit of fun with this competition ;-)