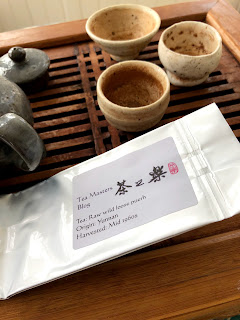 Shortly after my beloved Yixing pot broke I looked for something to console myself.  Surely some old aged puerh will bring up my spirits.  I pulled out this sample of wild puerh from the 1960s gifted to me from Stephane of Teamasters or included in an order, I can’t remember which but I am very very grateful.


I actually think it was included in an order just to put me in my place about my alternate view of “wild puerh”.  I heard it from a few vendors when I posted that it really doesn’t feel like puerh to me.  There were groans heard around the tea world I’m sure… hahahah.  I have never had aged wild tea before so this was going to be a real treat.  There is no greater joy for a puerh drinker (or wild tea drinker) than to drink tea that was produced before they were born... 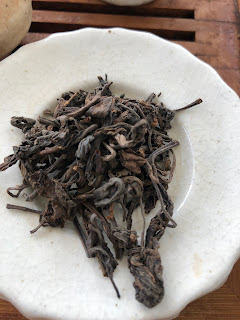 Dry leaves smell of old dust and dirt.  I close my eyes and smell deeply and if I didn’t know I was smelling puerh I would probably think it was just dust and dirt.  But I know its very old puerh so my mind seems to think I smell some old woody leathery notes under the almost exclusive old dust and dirt smells.  It smells like you are in an attic that hasn’t been open in decades or opening a hundred year old book in the old part of the old library in town.


I have a predicament.  I don’t have a pot that is small enough for this sample to ensure the proper grams/volume.  The solution- brew it in your smallest pot that you have and add just enough water to hardly cover the leaves (I really need to get me some more yixing fast!).  For this pot it means only half full of boiling water, just enough to barely cover the leaves then pouring it out of the pot immediately with flash brews.  If I tried to just steep these leaves in the whole pot, I would have pretty much wrecked these priceless puerh leaves.  With old tea, my limited experience and observation of teamasters is that you need to push it pretty hard.  That means boiling water, lots of dry leaves, maybe even longer infusions if it starts to show weakness.  Otherwise what’s the point?  Watered down aged puerh- to me that’s crazy.  Don’t do it.


I quickly flash rinse the leaves.


The first infusion is a very light woody aged slightly dusty with edges of a leathery taste.  There is a taste in here that only very old puerh has but I fail to explain it better than earthy-woody-almost raisin. Yes, there is still that returning coolness in the aftertaste and throat.  The mouthfeel is watery and viscus with a thin sandiness in the mouth.


The second infusion starts with almost flat dusty woody earth aged taste.  Then it switches back to a cooling returning sweetness. There is fruit taste almost like a plum that turns quickly to dried apricot and lingers for a long time in the aftertaste.    There is a note of leather underneath it all.  The dried apricot aftertaste is quite distinct, not a just one of those faint hard to recognize things, it’s quite obvious.


The third infusion actually tastes much the same.  I don’t know what I’d add here.  The mouthfeeling and throat feeling has just a slight comfortable astringency.  The feeling in the mouth and throat is full and is coated in a thin veil of sandiness like that from a very soft beach.  The qi is profoundly grounding, euphoric, optimistic, soft.


I stick my nose and waft deep odours from the wet leaves in the pot between each infusion.  Prizing every moment with this gift.  The wet leaves just smell very similar to the dry leaves- primarily dusty, earthy, old aged taste but more wet smelling like when the first rain hits after the snow melts and all the dust and dirt from sanding the icy winter streets seem to take on the spring air.


The fourth infusion has more of resinous wood feel to it.  The woody dusky earthy initial taste begins with it and it tails itself into the aftertaste.  There is still long dried apricot but it is a touch less apparent as before.  The qi is very big in the head.  It has a mild cozy lightness and barely warmth in the body.  It makes the body feel limber and expansive.  There is a cool menthol like taste on the breath 5 minutes later.  Breathe in.  I feel really high from this.  The head feels clear but the world moves slowly around me. 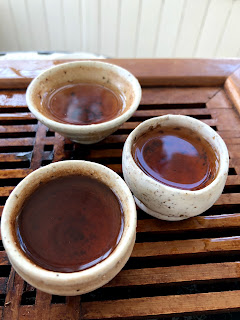 The wet leaves start to develop a menthol like odour and smell more of wood and menthol and less of dust and dirt.


I had to leave this tea for a hour or so then when coming back I resumed the session and in the seventh infusion it tasted more of creamy subdued woody- dusty –earth.  The cooling aftertaste was less and so was the long apricot aftertaste.  The mouth and throat feel is more of a chalkiness now rather than a fine sand.


The eighth infusion has another flavor profile emerging… there is an almost spiciness just before the apricot comes in.  The apricot aftertaste is back strong.  Yummy!


The ninth infusion the mouthfeel and throatfeel are amazing and continue to improve.  Its this dense but light chalkiness which I love.  In it are aged tastes, slightly cooling aftertaste, and apricot aftertaste.  Nice. 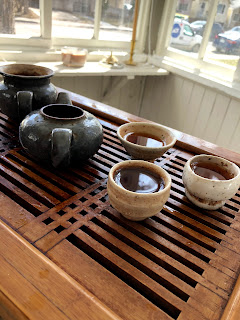 The tenth infusion is much the same.  The mouthfeel continues to really fill out.  The energy is very nice.  I burn it off with a 5 KM run then back to the tea table.


The eleventh has a thick, whisky like woodiness now. There are also salty notes probably just generated from my run and the resulting change in mouth chemistry.  The aftertaste is significantly less apricot and more smooth wood.


The twelfth is more of this richer woody aged taste.  The mouthfeel is nice and chalky very mildly astringent. Beautiful Qi. 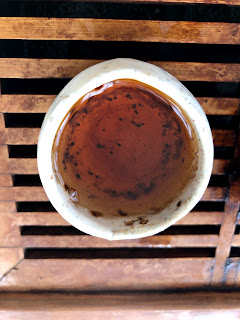 The thirteenth and fourteenth offer that aged woody camphor taste.  A new note, a floral one seems to emerge faintly recognizable but welcome in this mainly woody aged taste profile.


The leaves sit dry overnight and I resume steeping the next morning with a few more pots of tea.  I add 10 seconds or so to the flash steeping and it pushes out mainly just aged leather and camphor tastes with a slight returning coolness in the aftertaste.  The high note nuances are gone.


I push this into longer infusions now 20 minute and longer to push something more interesting out of the predominating aged flavor.  Otherwise you are just pretty much just dragging out the inevitable.  Doing this guarantees some nice autumnal leaves taste, aged camphor, woody, dirt tastes in a soft chalky mouthfeel.  There are just glimpses of fruit on the breath. 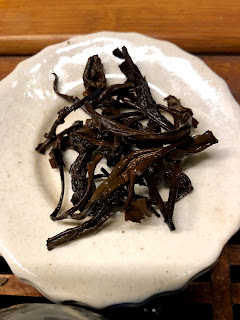 I put it to overnight infusions and a rich obvious nutty taste is dominant in aged tastes.  Yummmy.  There is still significant mouth feeling so I put it under water for another night.


I am still steeping this, think it’s been underwater for about 4 days now and have to get back to it tomorrow.  I will probably be boiling these leaves down over the stove when they seem to be giving up.
Peace

I get back to this one after 4 day long steeping and it gives off a watery aged leathery wood base taste with soft fruity notes in a little bit of a funk fermented taste.  The mouthfeel is pretty light here and the taste is a bit watery.

I throw the leaves into a small stove top pot and decoct them at a boil for a few hours.  The resulting brew is exquisite!  It is reduced into an very thick, viscous and oily liquor of thick sweet maple-syrupy-molasses like sweetness in a leathery aged taste.  The dense and heavy sweetness is long and very thick in the mouth.

I have a cup of this at the very end of a very busy work day.  The qi sensation is like nothing I've felt before.  It completely revitalizes me and expands my head through the clouds- big Qi.  It feels as if I consumed a few shots of espresso without the jitteriness but with profound mental release.

I think its safe to say that I've had a great week.