Another thing that I really noticed when getting back into buying puerh was that a lot more people seem to be buying China National Native Products (CNNP) puerh.  This surprised me at first.  To me CNNP was associated with a risk of being lower quality puerh.  Basically, you never knew, for certain what the cake would be like and had no brand recognition behind it.  At the random tea tables in China, and to a lesser extent Korea, there was a decent chance that these teas would be almost undrinkable.  To order a cake of this stuff blindly was almost unimaginable 10 years ago.


Nowadays, the mentality toward the CNNP labeled teas has changed thanks to western pureh vendors.  Puerh vendors have picked up on some Western puerh drinker’s preference for value over brand and have started stocking these.  As buyers we no longer have to be concerned about them being undrinkable because the vendors basically do the leg work here to ensure something of a particular quality that won’t compromise their own brand.  I feel sorry for them, but grateful!


As a result, we are now ensured a certain level of quality with these CNNP cakes.  Without brand recognition behind these cakes- great value can be had.  This pretty much removes the puerh collector from driving up the market value of these teas.  These are the true puerh drinker’s puerh!


Recently, my feeling of the CNNP cakes changed because of good reviews and a general positive outlook overall and a run of good ones that I sampled from Stephane of Teamasters .  After reading some of these reviews I really wanted to try some out in my next order.  It took me longer than I thought to order again (probably a good problem to have), but I am happy to say that some of these CNNPs are on their way.  I am really hoping that these cakes help me overcome my fear of CNNP.


The first to arrive was…. 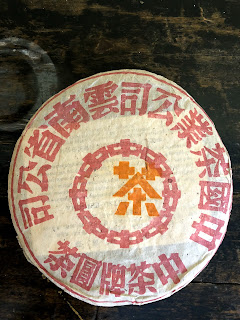 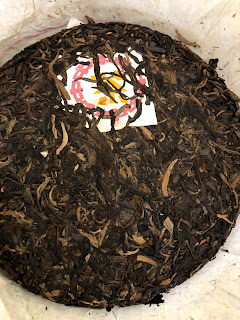 “Big Yellow” gets the big yixing and big Korean ceramic cups treatment today.  “Go bold or go home” I chuckle to myself.


The second infusion starts with a meaty, savory BBQ like taste then adds a slightly almost chalky rose edge.  The aftertaste is mildly cooling and evolves in the mouth.  The throat has a deeper chalkier mid throat feel which works well for this tea.  The aftertaste minutes later is a nice mild smokey menthol barely rose sweetness.  The aftertaste is long and interesting trying to push more subtle sweet flavours through.  The qi of this tea is strong enough to have a profound effect on the mind.


The third infusion starts with a smokey, BBQ like taste.  Then there is a splash of almost sweetness then back to smokey BBQ, then slowly and long evolving into a cooling returning aftertaste.  Minutes later there is a barely creamy rose aftertaste.  The taste profile of this tea is long and unfolds slowly.  The mouth and throat feel develop a nice astringency to it.  The aftertaste has a creamy almost sweet finish reminiscent of Nannou.  The way I am reacting to this tea, it contains more than a bit of evil qi in there.


The fourth infusion begins with this roasted meat and smokey BBQ taste.  The mouthfeel becomes more astringent but not overly so.  The aftertaste is more measured in this fourth infusion with less subtlety or sweetness pushing through. 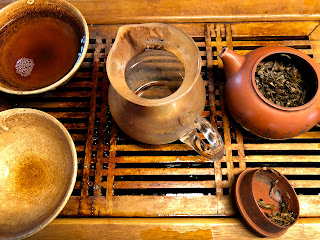 The fifth still carries this burley, masculine feel of smokey, strong almost harshness followed by hints of Nannou creamy sweetness in the aftertaste that slides into a rose-like taste. There is much to see in this tea if you can see through its smokey strength.


The sixth infusion starts to coalesce nicely.  Its initial taste is almost a creamy sweet woody taste.  Its less smokey here and more rich and creamy.  It has a nice floral rose like finish that is more noticeable now.  The mouthfeeling is chalky and deeper and aftertaste is slight cooling evolving.  The qi is really nice and strong you can feel it in the chest as the heart beats stronger and in the head that feel cloudy, energy sure is felt, a boost for sure. 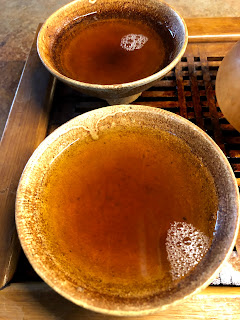 The seventh infusion is similar to the sixth but more smokey and woody.  Nice big qi in here for sure.


I think about throwing in the towel with this tea but it just tastes too damn good, despite some of the allergic like reactions I’m having to it.  It seems like it’s even getting better in these last infusions so I steep it a few more times.  The body of these infusions are decently rich and thick in the mouth with a more cohesive flavor profile of smokey wood and almost creaminess.  This tea feels like it could go a lot further with even more infusions. 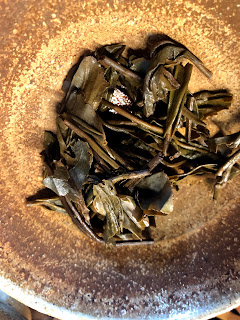 This tea reminds me of 85% Xiguan, 10% Nannou single estate, 5% Yang Qing Hao.  It is robust and strong, almost harsh but has some elegance, some softeness as well.  To me the Nannou profile is the most obvious but the strength indicates other Menghai material mixed in there.


This tea tastes great and has some very nice qi but my body is reacting negatively to something in that cake.  Who knows what it is.  I really want to like this cake, but my body and the itch is telling me it’s probably not worth it.  Due to past recommendations of this tea by others there must be many people out there who have sampled it.  Is there anyone else out there that has experienced allergic type symptoms?  Maybe I'm just allergic to good puerh?  Hahaha...

You link to my posts, is this the Yunnan Sourcing tea? The article doesn't say so or link to the tea. If so, then no, neither I, nor James nor Garrett nor Mr. Wilson experienced "itching." Might wanna double check the laundry detergent you are using, soaps etc.

and I wouldn't say that I'm overly sensitive to things.

The other CNNP cakes I've tired from Yunnan Sourcing, Teamsters, didn't give me any of these symptoms.

Its maybe just a coincidence that both contain Nannou material. Maybe I'm allergic to Nannou? Hahahah


The full name of the cake hyperlinks to Yunnan Sourcing.

So, I'm kind of curious what you mean by itching in the legs. I've lately experienced burning/itching sensations in the soles of my feet (as part of some broader paresthesia) that could be linked with certain teas, but also could be completely unrelated to any of this. I'd be curious if your experiences are anything like mine, as that'd be a useful data point for diagnostics.

That said, I have the CNNP in question and I've not noticed a correlation; I've mostly associated it with another cake which shall remain nameless until I've firmed up whether there's an actual link. I've also never experienced traditional allergy symptoms with a tea.

The sensation is increased runny nose with itch at the superficial skin level with no rash. Sometimes even sneezing.

It turns out this puerh was likely just stimulating my seasonal allergies. For my whole life I almost never had any allergies but over the last few years I get them. Interestingly, this is when I noticed a sensitivity to some puerh.

Today we had significant snow melt and, low and behold, I was sensitive to some other puerh I was only very very mildly sensitive to days before. When drinking this tea within minutes I would notice the above symptoms.

So I switched to a different puerh of the same year that I drink regularly but never have any reactions to. I drank it and nothing. Hours later I switched back to the tea giving me the reactions and here I was feeling itchy again. So weird.

I wonder if it’s a mold, fungus, or microbe in some puerh that I’m reacting to and not something sprayed as I initially suspected?

I probably am more sensitive to these things.